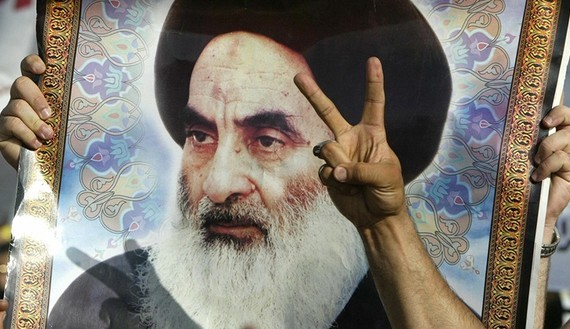 Iraq’s top Shiite cleric on Friday called on the powerful Shiite militias that helped reconquer the Islamic State’s territory to choose between politics and arms, backing a key demand of the prime minister.

Grand Ayatollah Ali Sistani stopped short, however, of rescinding a religious edict he made in June 2014 urging Iraqi citizens to join security forces at a time when the Islamic State was sweeping through the country, eventually taking over about a third of Iraq’s territory.

Instead, he said that all weapons should be under the control of the state and that armed groups should steer clear of political participation — marking a significant step in Iraq’s demobilization from a war footing now that major combat against the Islamic State has ended.

Sistani’s call, made during a weekly prayer sermon delivered in the city of Karbala by a representative of the reclusive cleric, comes ahead of elections next spring in which Prime Minister Haider al-Abadi is expected to face challenges from leaders of Shiite militias, whose influence and visibility have grown during the three-year battle against the militants of the Islamic State. Many of the militias are backed by Iran.

Maintaining Abadi’s hold on power is a major priority for the United States, which worked closely with the Iraqi prime minister in the war. Abadi is seen by Washington and many Iraqis as a reliable check on Iranian influence in Iraq, and a conciliatory figure who could lead a national reconciliation between Sunnis and Shiites.

Sistani’s comments are likely to bolster Abadi, who has said that reining in the many armed Shiite militias is an immediate imperative to stabilize the country as it reckons with the physical and social damage of the Islamic State occupation. In an interview with The Washington Post in October, Abadi said the militias must either join the formal Iraqi security forces or disband and separate their political and military activities. Those that refuse will become “outlaws,” he warned.

On Friday, Sistani did not call out the militias by name but hewed to Abadi’s line, raising the possibility that the militias could lose popular support if they disobey him.

He said Iraq still needs the manpower of the volunteers but exclusively within Iraq’s regular security forces.

“It is necessary to make continued use of this important energy within the constitutional and legal frameworks that restrict arms to the state,” Sistani’s representative said.

He added that the volunteers, known as the popular mobilization units, earned a reputation exceeding that of any political force in Iraq and that exploiting their popularity for political purposes would sully their “holy status.”

His 2014 edict prompted a stampede to join Iraq’s security forces. Although he had urged them to sign up for Iraq’s police and army, the majority raced to join established and newly formed militias that were hungrily recruiting under a banner of religious obligation.

Sistani’s call helped swell militia ranks to about 100,000. They operate under the umbrella of the popular mobilization units, which were legally incorporated into Iraq’s security apparatus in 2016, ostensibly commanded by the prime minister’s office. But the legislation left their mandate vague and did not touch their command structure.

The legislation did, however, bring 100,000 fighters under Iraq’s strained municipal budget. Dismantling or reducing the force would leave many unemployed.

The deputy commander of the popular mobilization units is Abu Mahdi al-Muhandis, who the United States has designated a terrorist and who maintains close ties with Maj. Gen. Qasem Soleimani, commander of the elite Quds Force of Iran’s Revolutionary Guard Corps.

The largest and most powerful militias — the Badr Organization, al-Nujaba, Asaib Ahl al-Haq, the Peace Brigades and Kitaeb Hezbollah — all have charismatic commanders, and most rely on Iran financially and ideologically. They actively fought American troops after the 2003 invasion.

Their interests have aligned with the Iraqi government’s over the past three years, but they have shown repeated disregard for Abadi’s orders. Despite Iraq’s pledge not to interfere in regional conflicts, thousands of militia fighters have participated in battles in Syria on the side of Iran, Russia and Syrian President Bashar al-Assad.

The popular mobilization units have fought in nearly every major battle against the Islamic State, to the chagrin of the United States and many Iraqi Sunnis who see them as a sectarian force. In the early years of the war, they were implicated in the summary executions and disappearances of Sunni civilians seen by the militias as Islamic State sympathizers.

More recently, the militias’ participation in the swift campaign to reclaim Kirkuk from Kurdish control after a failed Kurdish effort to secede has alarmed Kurdish Iraqis, who accuse the popular mobilization units of being Iranian proxies.

They also are deeply enmeshed in Iraq’s governing structure. The Badr Organization, which was created in Tehran in the 1980s, holds seats in parliament, and successive interior ministers have been senior leaders of the group.

This week, several prominent militia commanders, including the Peace Brigade’s Moqtada al-Sadr and Badr Organization leader Hadi al-Amiri, said they would be willing to disarm or decouple their political activities from their armed wings. This is the clearest signal yet that these commanders intend to participate in national elections next year.

Experts doubt that the move would actually weaken either group and see it as a public relations maneuver that cannot be fully carried out.

Ahmed al-Mayali, a political-science professor at Baghdad University, said some elements of the popular mobilization units that mustered after Sistani’s call will be easy to disband because they are loyal to the cleric. But those with close links to Iran will never realistically give up their weapons, he said, setting the stage for a protracted political or armed struggle.

“One of the games that Iran is playing is they will do their best to keep these groups strong in Iraq to use them in case there is pressure against them from the West,” he said. “That will put the Iraqi government in a critical situation that might escalate to armed battles to disarm these groups.”

Previous Female Congressional Candidate Ends Run After She Is Accused Of Sexual Harassment
Next In Syria, Russia securing position as Assad presses war