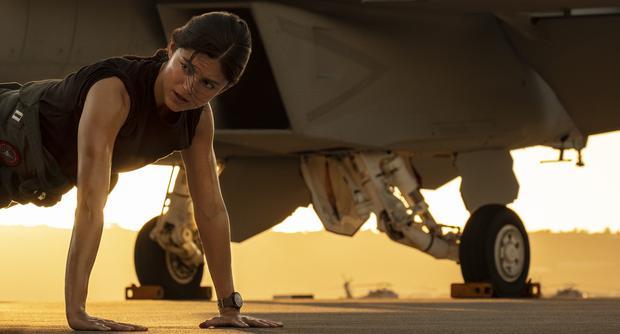 ... Notice also that Washington’s obtrusiveness is hinted at too since Maverick tells Charlie that she probably knows more about the case than he does, given that she has security clearance. Simultaneously, she doesn’t abuse this privilege by snooping on Tom Cruise’s family life. (It’s like watching Blade Runner, Deckard refusing to look into Rachel’s incept date even though he’s a policeman).

By Emad Aysha (PhD)
You don’t ‘quite’ get that in this new movie, given that the director is an American, and you see a country full of prosperity and working-class guys and gals – Jennifer Connelly – being able to take care of themselves without the help of government or men. I guess that’s part of the female empowerment angle, but it goes against the whole grist of the movie.

You also can’t help but notice that in the original movie all of the pilots, without exception, don’t have chest hair. Not to mention that they’re clean shaven; the exception to the rule of course being Goose, the married man who doesn’t need to prove he’s responsible because he is. The message is, boys into men, with the military teaching you responsibility, especially leading through example. Hence the character of viper aka Skirret. The new movie bites off a little bit more than it can chew.

Event so I can forgive it because of Jennifer Connelly’s sterling performance. I loved the scene where she was teaching Maverick how to sail, and him a so-called Navy man. But it just goes to show how the older movie was more internally consistent with itself and still stands up to this day. Now for a summing up and verdict, on both of these supercool movies.

Back from the Airshow

Just to reiterate, Top Gun (1986) is a movie very close to my heart, and not just because of the action and the visuals– it was really ahead of its time – and the tragedy. There’s also the music. The soundtrack is a classic to this day, with so many hits from American pop culture history, coupled with the ever lovely “Take My Breath Away” by Berlin.

Imagine my satisfaction to watch the opening sequence in this movie. You got the same buzz you got watching that other Tony Scott/Tom Cruise epic, Days of Thunder (1990). The music certainly is good in this movie but it’s mostly on loan from the previous film and the 1986 feature still has the superior soundtrack in my opinion. The lyrics and music literally bring scenes to life and careful repetition of certain songs gets you into the mood for a scene and helps you recollect those pleasant emotions when you hear the same song later on in a different scene. I’d never thought Tony Scott was such a maestro when it came to music but he was. This movie is certainly good but still not quite up to par. You can see this in the love-making scene with Jennifer Connelly. It’s great, and dignified, but nothing compared to the sheer passion and gentleness that you get in the first and, yes, music plays an important part in the older scene because of Berlin’s hit classic song.

The political messaging in the first movie was also more subtle, such as the scene where Maverick flies over the watchtower and makes a Navy official spill coffee over himself. The coffee cup, moreover, had the word ‘VIP’ on it. Later the same man bumps into a Navy flunky taking a tray of coffee cups to his superiors, and the poor guy looks scared and doing his best not to spill a single drop. It’s great!

In terms of special effects and cinematography of the aerial battles, needless to say, the new wins but even so I still think the original is better. There are practical special effects in the new movie but you could recognize the GCI effects, such as the SAM missiles. Also, the older movie knew some basic tricks to immerse the viewer into the battle, into the damn cockpit itself. There’s the endless sweating but also the endless ‘shaking’ of the cockpit scenes. I don’t know if that’s scientifically accurate but it helps you realize that they are flying, not stationary on the ground, and it calls back images we all have of WWII movies with shaking cockpits – propeller planes and all that. So again the older movie was better thought out and full of lovely little details. The only ‘bad’ thing I have to say about the original is the scene where the MiG blows up from a missile strike. They repeat that scene whenever a new MiG is hit. But, they had technological and no doubt financial constraints, so you forgive the movie makers.

The camera-work in Maverick is great. Digital cameras that show you freckles in detail and symmetry in certain settings. Even so the original is better. You have a heavy reliance on natural lighting, people standing in front of windows, with additional nice touches like the light on Tom Cruise’s (baby blue) eyes when he’s talking to Charlie, and opening up to her. It makes him look vulnerable and ‘on the spot’ so to speak. You don’t quite get that here.

There’s lots of good ‘moments’ in the new movie, dramawise, but they feel prescribed, as if taken out of a psychology manual. The old one is simpler and more threadbare but also more sincere and plausible. I still don’t understand why they had that scene where Jennifer Connelly’s admittedly adorable daughter warns Tom Cruise not to break her mother’s heart again. It could be an allusion to women having to become men in an era of deadbeat dads but still felt a bit unfair and forced. There’s more diversity in this movie – blacks and Asians – and that’s something to be said in its favour to the red blooded Americans in the old one, but more so given that these actors are not token roles but well-rounded and very likeable. Especially notable are Charles Parnell, Bashir Salahuddin and Monica Barbaro. Oh, and Lyliana Wray as Amelia Benjamin, adorable little squirt that she is.

So, all in all, Top Gun: Maverick is a beaut of a movie. It has its flaws and still isn’t quite as good as the original, but its plus points far outweigh its bummers. The movie also bodes well for Hollywood and the US entertainment industry because it shows that traditional moviemaking still works. Focus on story and characters first then everything else, and there’s nothing in machismo that negates femininity or the ability of women to be brave and decisive like their male counterparts. Politics aside, this is a must-see. But I would advise taking a lot of motion sickness pills!!!

By Emad Aysha - 2 weeks ago
... Notice also that Washington’s obtrusiveness is hinted at too since Maverick tells Charlie that she probably knows more about the case than he does, given that she has security clearance. Simultaneously, she doesn’t abuse this privilege by snooping on Tom Cruise’s family life. (It’s like watching Blade Runner, Deckard refusing to look into Rachel’s […]
Read story