By Neil Clark for RT –

Neil Clark is a journalist, writer, broadcaster and blogger. He has written for many newspapers and magazines in the UK and other countries including The Guardian, Morning Star, Daily and Sunday Express, Mail on Sunday, Daily Mail, Daily Telegraph, New Statesman, The Spectator, The Week, and The American Conservative. He is a regular pundit on RT and has also appeared on BBC TV and radio, Sky News, Press TV and the Voice of Russia. He is the co-founder of the Campaign For Public Ownership @PublicOwnership. His award winning blog can be found at www.neilclark66.blogspot.com. He tweets on politics and world affairs @NeilClark66 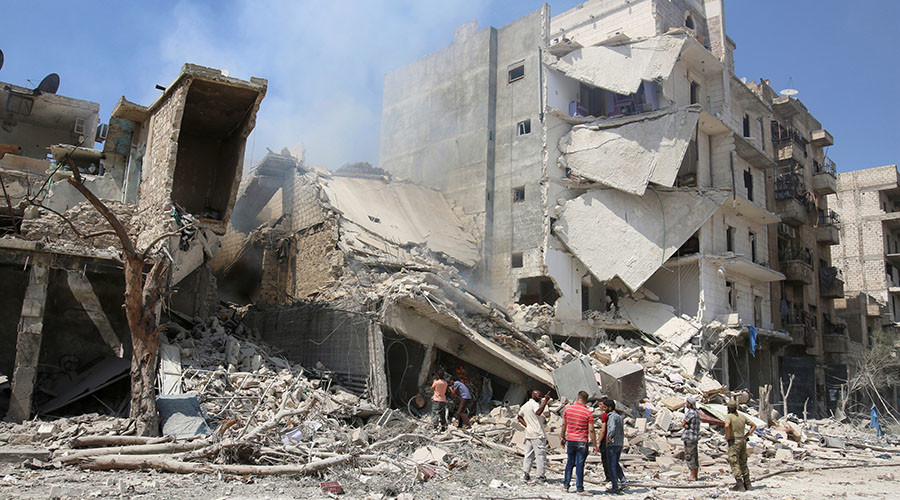 © Abdalrhman Ismail / Reuters
Here are 10 of the worst lies that have been peddled by the West regarding Syria, with the aim of giving people living in Western countries an entirely false view of the conflict that has been raging in the Middle East country since 2011.

As in the case of previous US-led wars against Yugoslavia, Iraq and Libya the lies told in relation to the ongoing conflict in Syria have been quite outrageous.

1. The West has failed to intervene in Syria – and that’s been the problem

This oft-repeated claim (only last week the Washington Post was lamenting ‘the disastrous non-intervention in Syria’) is a complete inversion of the truth.

Even without directly bombing the Syrian government in 2013 (as the uber-hawks wanted), the west has intervened massively in Syria, by funding, supporting and training violent anti-government ‘rebels’, many of whose weapons just happened to end up in the hands of ISIS. The west not only to ignite this conflict (see here) they’ve also helped to keep it stoked for over five years.

Brendan O’Neill had the perfect riposte to the neocon/faux-left ‘If only we’d intervened in Syria’ brigade:

“Western intervention is the ultimate author of the nightmare in northern Iraq and Syria. Do something? You already did something; you did this, you made this horror.”

2. The conflict is the fault of wicked Assad (and Russia for supporting him)

The dominant western narrative says that the conflict was started by Assad after the ‘evil dictator’ clamped down on peaceful protests against his rule in March 2011. The reality is that peaceful pro-democracy protests were hijacked at a very early stage by those determined to provoke a violent response from the Syrian authorities. In the border city of Daraa, where the conflict effectively began, seven police officers were killed and the Ba’ath Party headquarters and a courthouse were torched.

In the first month of hostilities, no fewer than eighty-eight soldiers were killed.

Assad was faced with a violent insurrection against the Syrian state – by terrorists – many of whom came from outside the country. Was he expected simply to allow these ’rebels’ take power (as the West was demanding) – even there was no evidence they had widespread popular support? The question we need to ask is what would the US government do if faced by a violent insurrection by foreign-backed ‘rebels’ who were killing officials of the US State and blowing up government buildings. Its response would, I’m sure, be even more ruthless than the Syrian government’s has been.

Whenever a country is targeted for regime change by the US Empire, its leader is de-legitimised. We’re told that said leader has no popular support and only remains in power because he’s a ‘brutal dictator.’ But there’s plenty of evidence that Assad, whatever western elites may think of him, has considerable support in his country. In early 2012, a poll showed 55 percent of Syrians wanted their President to stay. When the Guardian’s veteran foreign correspondent Jonathan Steele – a man who knows Syria very well – wrote a piece about this entitled ’Most Syrians back President Assad, but you’d never know this from western media’, he was attacked by Imperial Truth Enforcers.

In 2014, Assad won a landslide victory in the country’s first multi-party Presidential election for fifty years. 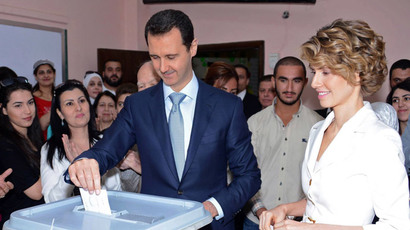 Again, this wasn’t given much, if any, coverage in the west. Neither was a poll in July 2015, showing that 47 percent of Syrians thought Assad had a positive influence on matters in Syria – compared to 35 percent thinking the same about the western-backed Free Syrian Army and 26 percent about the Syrian Opposition Coalition.

The further proof that Assad has widespread support is that he’s still in power after five and a half years of war. Should we really be surprised that millions of Syrians prefer his secular rule – in which the rights of women and all religious minorities are respected – to that of the medieval head-choppers of ISIS and fanatical jihadists?

Of course, for the west’s faux-democrats, the views of Syrians who do support their President are ignored. They’re regarded as ‘un-people‘ because they have the ‘wrong’ opinions. The only views that count in Syria are those that chime with western regime changers.

4. Assad has made no concessions and isn’t interested in peace and reconciliation

In fact, Assad and the Syrian government have repeatedly shown a desire to make concessions to try and end the conflict. In 2012, a new constitution, which ended the Ba’ath Party’s decades-old monopoly of political power, was put to the Syrian people, who endorsed it with an 89.42 percent vote. Article 8 of the new constitution states: “The political system of the state shall be based on the principle of political pluralism, and exercising power democratically through the ballot box”.

Again, little if any coverage of this significant reform was reported in the western media. Neither has there been much coverage of the various amnesties Assad has granted to ‘rebels’ (the latest in July this year) or of the government’s National Reconciliation Programme. This wouldn’t fit the ‘official narrative’ of an uncompromising President, only interested in ‘killing his own people’.

Around 74 percent of Syrians are Sunnis, so is it likely if all – or the vast majority of them – were against President Assad, he’d still be in power after five and a half years of war? The truth is that the secular Syrian government is supported by Sunnis and Shia and it’s the US which has been trying all it can to exploit religious divisions and foster tensions, as Wikileaks has revealed.

In 2006, William Roebuck, charge d’affaires at the US Embassy in Damascus, listed as a ‘Possible Action’ to destabilize the Syrian government: ‘Play on Sunni fears of Iranian influence’

Divide and conquer has been a strategy deployed by imperial powers down the ages, and the US Empire is no different. 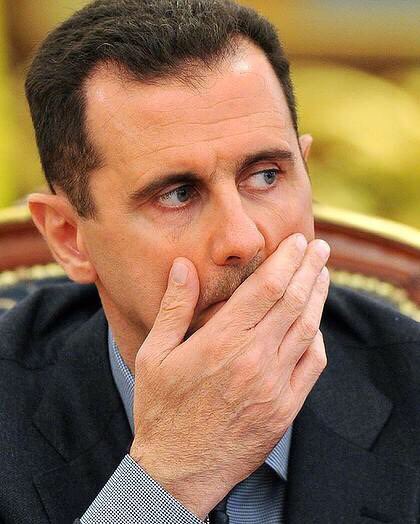 If I received ten pounds for every time I’ve read ’Assad gassed his own people at Ghouta’ or words to that effect, I’d be a very rich man. But what is asserted as an incontrovertible fact by western war propagandists, is anything but. Three years on ,we still don’t know for sure who carried out the chemical weapons attack. Yes, it could have been the Syrian authorities, but it could also have been a false flag operation carried out by anti-government ‘rebels’.

Common sense tells us that Assad would have been mad to order such an attack knowing that UN inspectors were in Damascus at the time, and western hawks were itching for a reason to bomb him. Next time you see a hawk claim as an established fact that ‘Assad gassed his own people’ at Ghouta ask for the proof. It’s long odds on you won’t receive a reply.

7. Russia and the Syrian government have been helping ISIS

This is a good example of an acceptable ‘conspiracy theory’. After Russia had started bombing ISIS and other terrorist groups in Syria in September 2015, we were told that Russia was giving ISIS an air force.

However, when a Russian passenger plane was shot down a few weeks later, the line changed – the attack was a ‘warning shot’ for Russia from ISIS.

But why, if Russia was providing ISIS with an air-force, would the group want to down a Russian plane?

Putin’s air campaign in Syria is not only supporting Assad, it’s giving cover to fighters from the so-called Islamic State.

In fact, Russia and the Syrian army has inflicted far more damage on ISIS in Syria over the past year than the US and its allies have. In March, the ancient city of Palmyra was liberated from ISIS by the Syrian army, supported by Russian air strikes.

As Danielle Ryan wrote at the time, it was “the single biggest defeat for ISIS since it declared its caliphate, but the West does not seem interested. Why? Because then they’d have to give some credit to Russia”.

8. The West is on the side of the ‘good guys’ in Syria

The truth is the West hasn’t been fighting ‘terror’ in Syria but aiding it. By any objective standard, ’ moderate rebels’ supported by the US, the UK and their allies, have been guilty of appalling crimes which would definitely be classed as ‘terrorism’ if they were committed in a western country or in a country which was an ally of the West. As for being horrified by the rise of ISIS, we know from declassified secret US intelligence documents from 2012 that the prospect of a ‘Salafist’ principality being established in eastern Syria was “exactly what the supporting powers to the opposition want” as it would“isolate the Syrian regime.”

This outlandish and uncorroborated claim was made by British Prime Minister David Cameron when he was trying to get British Parliamentary approval for airstrikes in Syria last November. Cameron‘s exact words were: “We believe there are around 70,000 Syrian opposition fighters – principally the Free Syrian Army – who do not belong to extremist groups… and with whom we can co-ordinate attacks on ISIL.” But in January, the former British Prime Minister (having won his vote) was already back-tracking by admitting that some of the “70,000” were “relatively hardline Islamists”.

When Cameron was asked by RT’s Eisa Ali: “Why won’t you or the Defense Secretary name the supposedly moderate groups in whose name these fighters are in the field?” his reply was, “We’ll be effectively giving President Assad a list of the groups and the people and potentially the areas he should be targeting.”

10. Western intentions in Syria are humanitarian, whereas Russia is acting out of self-interest

Repeat after me (by order of the NeoCons): ‘The West only wants to help the Syrian people be free, while the Russians are ‘propping up the evil Assad’ for their own selfish reasons’. In fact, ‘regime change’ in Syria was on the West’s agenda long before anti-government protests began in 2011, and dates back to at least 2006 when Syria’s support for Hezbollah was blamed for Israel’s failure to defeat the Lebanese group in the 33-day war in that year.

Just imagine what the US response would be if Russia set out to bring about a violent regime change in a country that was a long-standing ally of the US. We can be sure the Russian actions would not be portrayed as ‘selfless’ and ‘humanitarian’!

The statements, views and opinions expressed in this column are solely those of the author and do not necessarily represent the Levant News.

Apple not as reliable for energy sector as once assumed

Every day, energy merchants collect and scrutinize whatever information they can find on fuel demand …