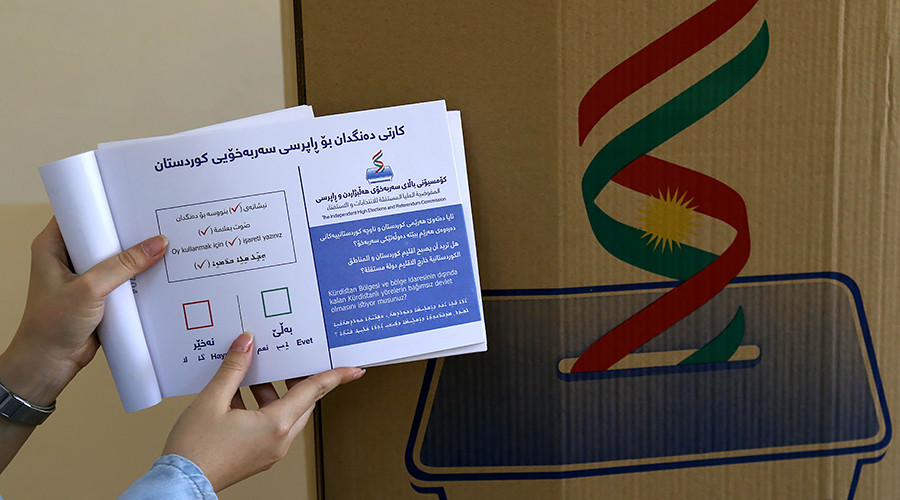 The United States on Friday declared illegitimate Monday’s Kurdish referendum on independence, as the Iraqi government imposed a ban on international flights to airports operated by the Kurdistan Regional Government and Iraqi troops prepared to seize the semiautonomous region’s border controls.

“The United States does not recognize the . . . unilateral referendum,” Secretary of State Rex Tillerson said in Washington’s first substantive statement on the vote, in which nearly 93 percent of voters in the Kurdistan region approved declaring an autonomous state in northern Iraq.

“The vote and the results lack legitimacy,” Tillerson said, “and we continue to support a united, federal, democratic and prosperous Iraq.” He urged both sides to reject the use of force and engage in dialogue, and to remain focused on the fight against the Islamic State, which he said was “not over.”

The flight ban was the first major step Baghdad has taken to express its outrage over the referendum. It has also threatened to close land borders between Kurdistan and the rest of Iraq and to send troops into the disputed, oil-rich city of Kirkuk.

Iraqi soldiers are massing on the Iranian and Turkish borders with the Kurdish region, preparing to take control of the crossings from Kurdish authorities, according to a senior Iraqi official familiar with the plan. The Iraqi army chief of staff traveled to both countries this week to coordinate the move, the official said, which could begin as early as Saturday. Turkey and Iran, which have their own restive Kurdish populations, opposed the referendum, as did the United States.

The Iraqi military also temporarily closed a major road linking the Arab city of Mosul to the Kurdish city of Dahuk on Friday, cutting off a key route for basic goods between the two hubs.

Iraq’s government has said that all measures to isolate the Kurdish region would be temporary and reversed if the Kurds annulled the results of the vote, which Iraq’s Supreme Court deemed unconstitutional.

Kurdish officials have called the measures illegal and have pleaded for international support in confronting threats from Baghdad, Tehran and Ankara. But Tillerson’s sharp statement indicated that the United States, despite its strong alliance with the Kurds, would not offer any.

Iraqi Prime Minister Haider al-Abadi’s tough reaction to the Kurdish ballot got a boost from the country’s highest Shiite religious authority, the influential Grand Ayatollah Ali Sistani. In a sign of the growing anxiety in Iraq’s power centers over the vote, Sistani’s representative used his weekly Friday sermon to criticize the referendum as destabilizing, arguing that it invites international meddling in Iraq’s affairs.

“I call on the government to consider the Kurds’ constitutional rights in their measures,” Sistani’s representative said, sounding a conciliatory tone. At the same time, he rejected any challenge to Iraq’s sovereignty and territorial integrity.