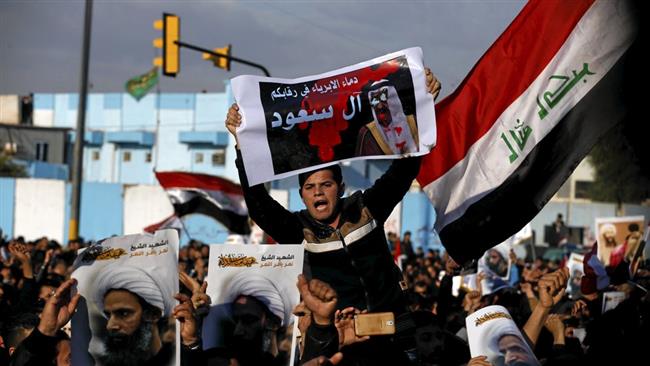 People protest against the execution of Shia cleric Sheikh Nimr in Saudi Arabia, during a demonstration in Baghdad on January 4, 2016. (Reuters)

THE LEVANT NEWS — Thousands of people have protested in a number of cities across Iraq to express their condemnation of the recent execution of a prominent Shia cleric in Saudi Arabia.

On Monday, protesters marched outside the Green Zone, an area that houses government departments and diplomatic buildings, in the Iraqi capital Baghdad. They held portraits of Sheikh Nimr al-Nimr, who was executed by Saudi Arabia on terrorism charges.

Angry protesters tried to cross a line of barbed wire to reach the Saudi embassy while chanting “Damned, damned be Al Saud!” Police, however, pushed them back.

Similar demonstrations were also held in Basra, Karbala and Najaf. In Karbala, protesters carried a coffin symbolizing a funeral procession for the Saudi cleric and shouted “Killing Sheikh Nimr is the beginning of your downfall,” addressing the Saudi monarchy.

Demonstrators in Basra held banners calling on all Iraqis and the government to boycott Saudi products.

Political and religious figures called on Baghdad to cut off ties with Saudi Arabia following the execution of Sheikh Nimr along with 46 others on Saturday.

Leader of Iraq’s Shia Sadr Movement Muqtada al-Sadr, also censured the “Daesh-style” execution of Nimr as “shameful,” calling on the Iraqi government to shut the Saudi embassy in Baghdad,

The execution of the Shia cleric has drawn condemnation from governments and human rights groups all across the world.

Sheikh Nimr, a critic of the Riyadh regime, was shot by Saudi police and arrested in 2012 in Qatif in Saudi’s Eastern Province, which was the scene of peaceful anti-regime demonstrations at the time. He was charged with instigating unrest and undermining the kingdom’s security. He had rejected the charges as baseless.