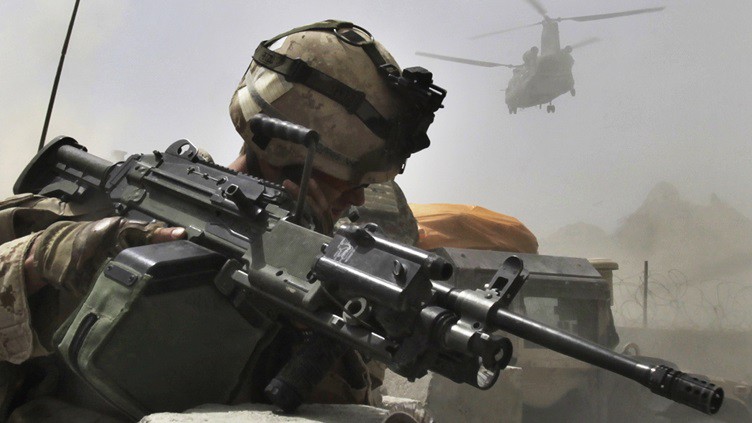 They went to Syria to fight Islamic State. Now two Americans find themselves in limbo

Former Marine Kevin Howard claimed scores of kills as a sniper volunteering this year with a militia fighting Islamic State in Syria.

He wanted to help people, Howard had said this summer, especially Christians who were being persecuted for their faith just as they had been in areas where he had fought with the Marines in Iraq.

But this fall, Howard and a fellow American volunteer, Taylor Hudson, grew disillusioned with the U.S.-backed militia and decided it was time to leave the battlefield and return home. But that decision launched both men on an uncertain and still unfolding journey that highlights the odd nature of their role as soldiers fighting for a cause, not a country.

Earlier this month, Howard, 28, a heavily tattooed veteran from San Francisco, disappeared after crossing the border in Iraq. His friend Hudson then had to decide: Stay in Syria or go to Iraq in hopes of finding his missing comrade?

“I don’t know what my situation is going to be once I cross the border” into Iraq, Hudson said Thursday from a home where he was sheltering with friends in Syria.

Americans have a history of volunteering to fight overseas, but the war in Syria presents distinct problems and challenges. The U.S. State Department advises against volunteering to fight with U.S.-allied Kurdish and Syrian militias, and the U.S. is under no obligation to aid such fighters if they get in trouble. But if the volunteers manage to return to the U.S., they face no legal consequences.

Of the several hundred such volunteers who have served since the Syrian civil war began six years ago, some died on the front line. According to local estimates, several dozen remain fighting in Syria. Others returned to the U.S. after their tours of duty, where would-be volunteers quiz them about the dangers they faced.

When Howard joined the Syriac Military Council, known as the MFS, last year, he was well aware of the risks. He made one stipulation: He would fight as a sniper team with Hudson, 33, from Pasadena, whom he trained with and trusted. Commanders agreed.

In July, when they spoke with the Los Angeles Times on the front line in Raqqah, they were encouraged. Militia fighters had broken through the city’s ancient wall and were gaining new footholds in Islamic State territory.

Days later, their unit was targeted by deadly Islamic State suicide attacks. An Assyrian fighter was shot and killed on patrol. Their missions became more ragtag, assembled at the last minute. Hudson insisted he leave the front line to get treatment for his hand, injured by shrapnel in June. He traveled north to the militia’s training academy in Tal Tamr, expecting to rejoin Howard in Raqqah in a few weeks.

But Hudson never returned. Commanders refused to allow Hudson back to the front, he said, and began pushing Howard to shift south toward the worsening battle in Dair Alzour. Each heard that the other had been killed. Howard eventually persuaded commanders to transfer him where Hudson was so they could leave Syria together. But then, Hudson said, they were detained at the academy.

An MFS spokesman insisted that the pair were “absolutely not jailed” and that “we always appreciate the will of Westerners to join our fight and cause.”

Last month, a paralegal friend of Howard’s back in the U.S., Jeanette Carlisle of Fort Worth, tweeted a plea for help to U.S. Army Col. Ryan Dillon, a Baghdad-based spokesman for the U.S.-led coalition. Could the military, she asked, rescue Hudson and her friend?

"While we join you in your concern for Mr. Howard, U.S. forces here are fully engaged in an international effort to defeat ISIS, and unfortunately are not resourced for or tasked with checking on Americans who make this dangerous choice for themselves,” Dillon wrote back, referring her to the State Department. ISIS is another name for Islamic State.

Hudson was desperate to leave. He still felt driven to help Syrian friends and a family that had sponsored him, but he was burned out.

“I had to come up with a formula to estimate how many of my friends I had seen shot. It was over 500,” he said.

He said he was told by a contact at the State Department that the pair could seek help from U.S. forces based in Kobani, on the northern border. But he and Howard were turned away.

“They talked to us like we are criminals,” Howard wrote in a message Oct. 9. “We need help.”

Dillon said in an interview that it wasn’t the military’s responsibility to rescue American volunteers in Syria.

“The State Department has been very clear in discouraging non-official travel of Americans to the combat theater,” he said. “Barring direct orders from higher authorities, the U.S. military is neither resourced for, nor charged with, search/rescue efforts for Americans who have voluntarily traveled into Iraq and Syria,” which he said “poses potential risk to military personnel and resources otherwise dedicated to the defeat of ISIS.”

Dillon did say that the U.S. Embassy in Baghdad was looking into the matter of Howard and Hudson, but a State Department official noted that the department “has no consular presence in Syria — our ability to provide consular assistance to individuals who are injured or kidnapped, or to the families of individuals who die in the conflict, is extremely limited.”

After the pair failed to get help in Kobani, Hudson said they returned to Tal Tamr, where he got his passport back and was allowed to leave after signing paperwork absolving the militia of responsibility for his safety. But militia leaders still held Howard, seizing his passport because he had been such a high-profile fighter, Hudson said. When Hudson last talked to him by phone Oct. 13, Howard said militia officials had moved him east to Hasakah.

“He was afraid they were going to just drive him to the Iraqi border and dump him in the middle of nowhere,” Hudson said of his friend.

The next day, he learned what had happened to Howard.

The militia released a photo and video of Howard crossing the border into Iraq at Faysh Khabur. Although Howard remained incommunicado, by Thursday the U.S. Consulate in Irbil confirmed to friends and family that Howard was being held by Kurdish officials in that northern Iraqi city, and that they should be able to secure his release in a few weeks.

Howard’s mother, Susan O’Leary of Grants Pass, Ore., said Saturday that she was contacted by consular staffers in Irbil who said they had visited her son at a nearby detention center. “His spirits were high, his health was good, and he’s looking forward to getting home,” she said.

She added that her son “knew he was going to get picked up when he got back into Iraq” for visa violations connected to his entry into Syria from Iraq. Such violations often trigger a fine. “Word is, it can range from $5,000 to $10,000,” O’Leary said.

She noted that Howard, after risking his life to help the militia effort, now has to pay to get out of the Middle East. “No hero's welcome. No pay at all. They did this because they wanted to fight ISIS. They are not mercenaries. I wish people clearly understood that,” she said.

The U.S. Consulate is arranging an exit visa for Howard, a "repatriation loan" to pay the fine, a plane ticket “and enough money to get home,” O’Leary said. The process could take months.

Hudson, meanwhile, is still in eastern Syria, trying to figure the safest route home. In a phone interview, said he didn’t regret volunteering to fight.

His advice to other prospective volunteers: “Know what you’re getting into.”