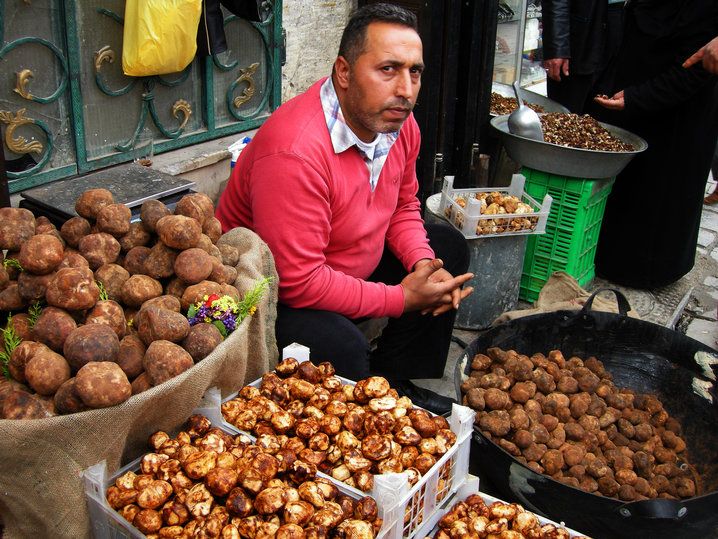 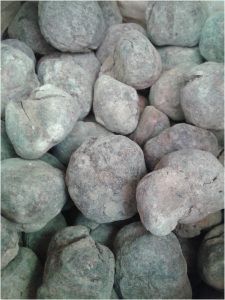 I took this picture yesterday at the market showing fresh raw Syrian truffles.

Truffles are rare. Since they are wild and could not be commercially cultivated people pick them with passion and eventually demand premium prices.

“The diamond of the kitchen.”

Let us go on a quick intro.

What are truffles to start with?

Botanically truffles are fungus where the truffle is the fruiting body of a subterranean (underground) fungus belonging to the genus Tuber while the Syrian truffles sometimes called desert truffles belong to the genus Terfeziaceae.

Since they are ectomycorrhizal fungi they live in symposium with other plants or tree roots. They spread their spores through fungivores A.K.A. animals that eat the fungi.

In Arabic it is called kemma(الكمأة). It requires lightning to break the hydrogen bonds of the decomposed plant material on which it feeds. Arabs call it the daughter of lightning (بنت الرعد) because of that and when they see a lot of lightning they say: this is a truffle year. There are 30 kinds of desert truffles some as aromatic as European species.

Back then it was not so expensive and in bountiful years people would dry them (no electricity or canning available) with salt and store them for later consumption.

I remember a local puzzle about it in Arabic which goes as follow:

It is the daughter of the wild and the wild is her habitat.

Soaked in fat but bones has not. 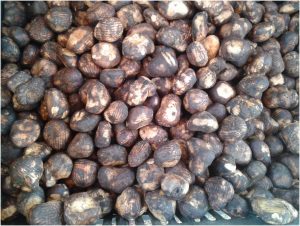 Today I saw these slightly peeled truffles at another shop.

It is nutritious with 9% proteins, 13% carbohydrates, 1% fats plus minerals like phosphorus, sodium, calcium, and potassium.

It contains Vitamin A, B-1, B-2 plus amino acids that are vital for the body. 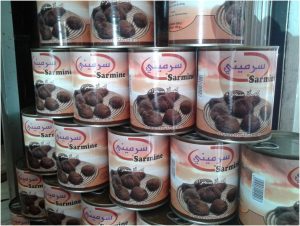 So here we are back. Desert is a rich habitat that awaits rain and lightning to show off her gems. When rain comes it blooms so fast as in Arabic people say “desert soil” is hot (حارة) and blooms fast.

In a sense that is true but from an agronomy point of view it is the need for a fast reproduction cycle to grow and form and spread the seeds before it is dry again. Waiting sometimes months long before the next rain comes hoping for a new chance to pick those underground pearls.

*The Author is a Syrian researcher and agricultural engineer.