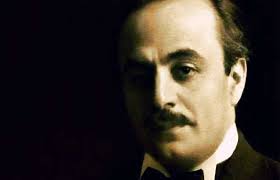 THE STRANGE CASE OF KAHLIL GIBRAN AND JUBRAN KHALIL JUBRAN

While his masterpiece The Prophet– originally published in English by Alfred Abraham Knopf in New York in 1923, and translated into at least 100 languages – is well-known by readers all over the world, the author’s biographical identity remains a mystery to most people: an American hippie writer or an old long-bearded Indian guru? The majority of Westerners indeed ignore he was an Arab-born poet, novelist and painter who immigrated with his family to the United States at the end of the 19th century from his native Mount Lebanon, part of the Ottoman Greater Syria.

By Francesco Medici
One of the strangest enigmas related to him resides in his name: Arabs call him Jubran Khalil Jubran (Jubrān Khalīl Jubrān),¹but for the rest of the world he is Kahlil Gibran. To be sure, we know that he always signed his full name in his Arabic works but dropped the first name in his English writings changing the correct Arabic spelling of ‘Khalīl’ to ‘Kahlil.’ But which was his official American identity name? How was his name registered in the United States? How did he use to formally introduce himself there?

In the noted biography of him by Mikhail Naimy (Mīkhā’īl Yūsuf Nu‘aymah, 1889-1988), we find a precious clue to solve the case. Soon after his arrival to Boston, the young boy was enrolled at the Josiah Quincy School which was situated at 88 Tyler Street and that he attended from 30 September 1895 until 22 September 1898. Naimy quotes an (imaginary) dialogue between the student and his mother after his first day at school. At one point he tells her: «My teacher of English […] calls me by my father’s name – “Kahlil” – for she finds it odd that my first name is the same as my surname.»² His father’s name was Khalil Saad Jubran (Khalīl Sa‘d Jubrān), and this probably explains why the records of the Quincy School reported the student’s name as «Kahlil Gibran Jr. alias Assad»³ (instead of Saad). As illustrated below, these are just two examples of the innumerable times that his Arabic name was misinterpreted or misspelled in America.4

Probably in order to avoid this kind of snag, he had to submit to Westernize his name to Kahlil Gibran very early on, while never forgetting its original Arabic form and meaning, destined in truth to be almost a sign of destiny for the man and the artist, a sort of omen of the universal message of peace and fraternity he would have spread to the next generations through his art and literature: ‘Khalīl’ means indeed «(good, beautiful, intimate) friend/companion,» «honorable comrade,» while ‘Jubrān’ originates from the root j-b-r, hence the verb jabara, which also has amongst its meanings «to console,» «to comfort.» So Gibran’s full name in Arabic could sound something like ‘comforting intimate friend.’

Sadly known as “The Island of Tears,” Ellis Island, in Upper New York Bay, was the gateway for over 12 million immigrants to the United States as the nation’s busiest immigrant inspection station between 1892 and 1954. It was the processing facility for the most stupendous immigration movement the world has ever seen, and as a ‘Syrian alien’ (he never became an American citizen) and a steerage passenger, Gibran’s entries into the United States of America also had to be processed through there.

During his life he landed at Ellis Island three times, the first, as a young boy, with his family (except his father, who had stayed behind in Bisharri, Lebanon) and the other two, as an adult, by himself. Curiously, every time, Ellis Island officers registered his name in a different way, so records vary from entry to entry.5

·       Port of Departure: Rotterdam via Boulogne

Also his half-brother, mother, and sisters were inaccurately listed as follows:

Rahme (Raḥmah), and not ‘Rhamé,’ was Gibran’s mother’s surname. But why did the Gibrans come in under the name of Rhamé? Kamila (Kāmilah), and not ‘Camé,’ had previously been married to Hanna Abd-al-Salaam Rahme (Ḥannā ‘Abd al-Salām Raḥmah), a cousin of hers who had died in Brazil, leaving her with one son, Butrus (Buṭrus) or Peter (and not ‘Poutros’). Since Khalil Saad Jubran – Kamila’s second husband, and father of the author, Mariana (Maryānā) and Sultana (Sulṭānah) – did not immigrate with them to America, it was the male eldest child to serve as the head of family in that circumstance, and this probably is the reason why they used his name. Lastly, it is noteworthy that the register gives Gibran’s age as eleven instead of twelve (as is well known, he was born on 6 January 1883).

In 1898 Gibran was sent back to Lebanon, where he joined the Maronite Catholic college Madrasat al-Ḥikmah (Collège de la Sagesse) in Beirut.7 In 1902, he hurried back to the United States upon hearing of the death of his youngest sister, Sultana, of tuberculosis.

Apart from his age, again wrong (he was 19), this second record is a fundamental document that shows his official American identity name, as reported in a U.S. Registration Card dated 12 September 1918 that gives his full name as «Gibran Kahlil Gibran,» identifies him as a Turkish subject and states his occupation as an artist and poet.8

So Gibran Kahlil Gibran was surely the full name by which he signed not only all his government documents but also his banking transactions. He was holder of an account at the Bank of the Manhattan Company (31 Union Square, New York City) and in my personal collection of Gibran items I keep a twenty-five dollar check dated 14 August 1928 precisely signed by him as «G.K. Gibran»,9 made out to his fellow citizen Joseph Salah of Bisharri, owner of the Sheik Restaurant which was situatedin Boston at 199 Longwood Ave.10. 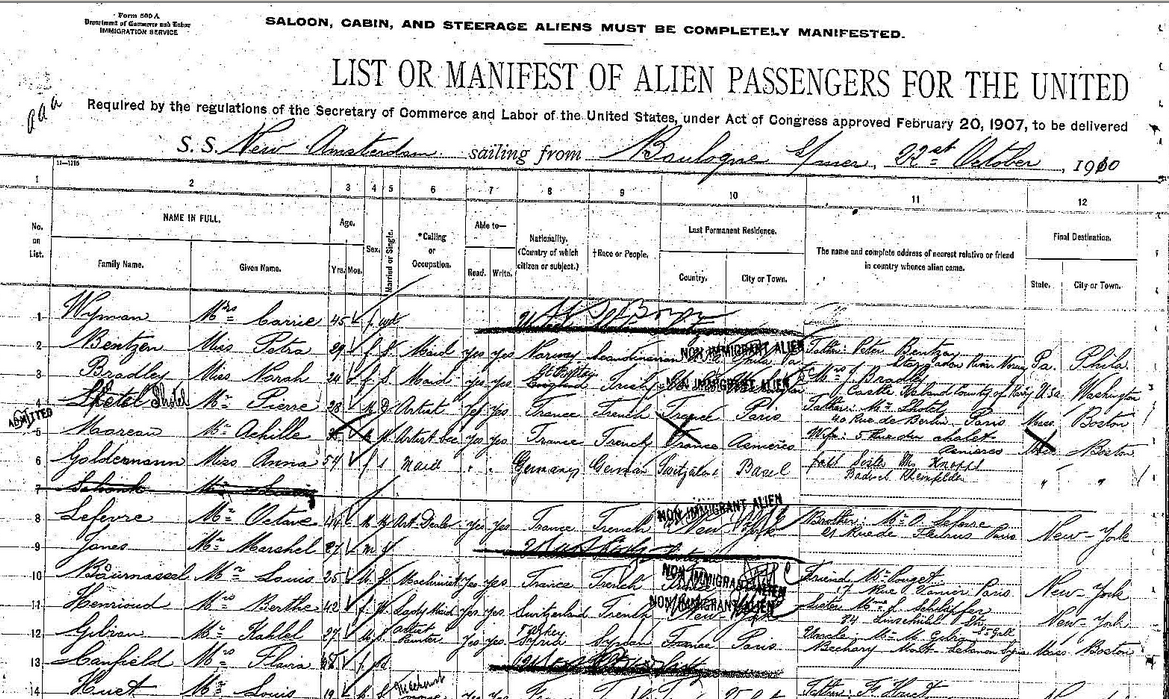 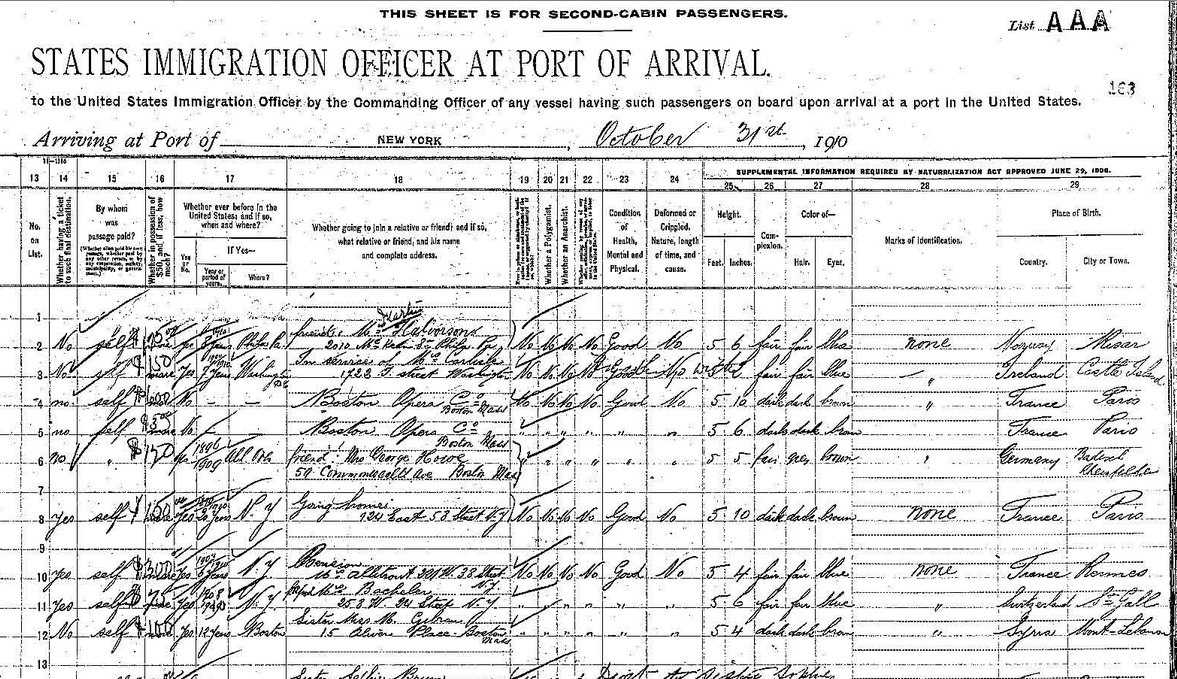 "Must I Answer the Telephone?"

Gibran in the New York Directories

"I have my own telephone now and I do not have to run up and down those stairs all day long! The number of the telephone is 9549 Chelsea" he wrote to Mary Haskell on 31 January 1917.13 So we have the precise date when Gibran, resident at 51 West Tenth Street, New York, enthusiastically became the owner of his first telephone line but, as already ascertained by Lebanese author and researcher Henri Zoghaib (b. 1948) in 1985, there is no trace of it in the Manhattan directories: he evidently must have asked not to be listed.14 But why? We can perhaps find an answer in his reserved bearing, as referred by his friend, confidante and amanuensis in his later years Barbara Young (pseudonym of Henrietta Breckenridge Boughton, 1878-1961): ...Behind the Gibran who wrote and spoke with authority and with full consciousness of his work and its worth was another one, a shy, reticent, almost shrinking person, […] like a timid child, who said often, “Must I go and meet those new people?Must I stand up and speak before these others? […] Must I answer the telephone?”.15

In order to find his name in a city directory, we have to go back to a 1915 New York City Directory, which does not report residents’ telephone numbers, where it is listed as "Gibran Kibel." To prove it is definitely our man it lists his occupation (artist) and address (51 W10th).16 On the other hand, a confusion at that time also about Gibran’s origins is evident in the newspapers, too: just to quote an example, a 1914 article mentions him as "an Armenian artist."17 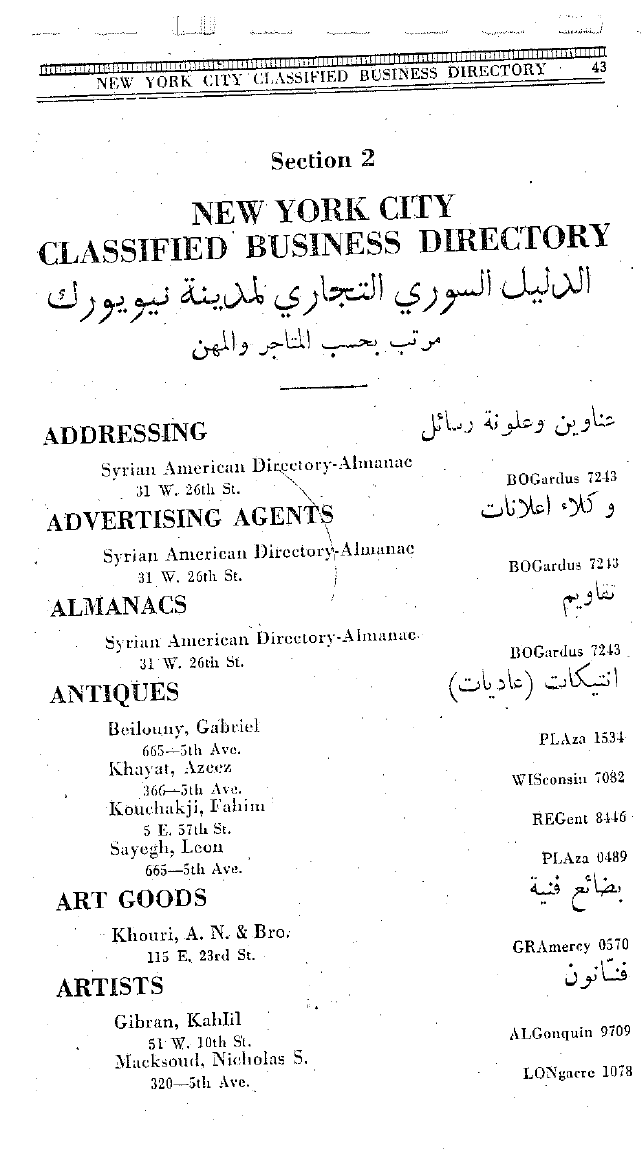 1. The middle name is his father’s: it is a convention among Arabs to use the father’s name after one’s first name.
2. Mikhail Naimy, Kahlil Gibran: A Biography, with a Preface by Martin L. Wolf, New York: Philosophical Library, 1985, p. 28.
3. f. Jean Gibran and Kahlil George Gibran, Kahlil Gibran: Beyond Borders, with a Foreword by Salma Hayek-Pinault and Afterword by Salma Khadra Jayyusi, Northampton, Massachusetts: Interlink Books, 2016, p. 439.
4. particularly amusing anecdote worth mentioning once told by Gibran himself is when he was by then famous and met a policeman in Central Park, New York City, who, after hearing he was «Syrian,» asked him: «Oh. Know anything about that Syrian – think his name is Kaylee Guibran– the fellow who writes books?» (cf. Juliet Thompson, “Juliet Remembers Gibran: As told to Marzieh Gail,” in World Order, 12, 4, Summer 1978, p. 31).
5. See The Statue of Liberty-Ellis Island Foundation archives (https://www.libertyellisfoundation.org/about-the-foundation).
6. They headed straight off to Boston, which always appears to have been their intended destination.
7. According to some biographers, he was enrolled in a junior class because his knowledge of Arabic was patchy. Still, he protested and was allowed a more flexible routine.
8. Francesco Medici Collection.
9. A photographic reproduction of it has been published in Joumana Bou Fakhreddine, Gibran K. Gibran: Alive, two vols., Beirut: Dar Almoualef, 2017, p. 21 (Courtesy Francesco Medici).
10. In 1919, Joseph Salah and his wife Nora emigrated from Bisharri to the United States, where he became an entrepreneur and restaurateur. By 1924, they had three children: Isabel, James, and George. Upon James’s death in 2009, the Salah Foundation was founded in Boston, Massachusetts. It is a private foundation, directed by his niece Noreen Salah Burpee, that supports non-profit organizations (cf. http://www.salahfoundation.org/).
11. Single-screw steamship.
12. “Correspondence between Gibran and Rihani,” in Excerpts from ‘Ar-Rihaniyat’ by Ameen Rihani, edited with an introduction by Naji B. Oueijan, Beirut: Notre Dame University Press-Louaize, 1998, p. 68 (translated by Suheil B. Bushrui).
13. The same telephone number is also mentioned in another letter to Mary dated 26 August 1918 (cf. Beloved Prophet: The Love Letters of Kahlil Gibran and Mary Haskell and her Private Journal, edited and arranged by Virginia Hilu, London: Quartet Books, 1973, pp. 286 and 313).
14. Cf. Henri Zoghaib, Kahlil Gibran… People and Places, Translated from original Arabic by Angélique Béaino and Jennifer Berry, Edited by Brighid Webster, London-Beirut: Centre for Lebanese Studies, 2016, pp. 110-112.
15. Barbara Young, This Man from Lebanon: A Study of Kahlil Gibran, New York: Knopf, 1945, p. 12.
16. Cf. R.L. Polk & Co.’s 1915 Trow General Directory of New York City, Embracing the Boroughs of Manhattan and the Bronx, vol. 128, p. 768.
17. “Art World Calm During Holidays,” in The Philadelphia Inquirer, 13 Dec. 1914: «Kahlil Gibran, an Armenian artist, will open an exhibition of paintings and drawings at the Montross Galleries tomorrow, to run to December 30. Mr. Gibran returned from Paris some years ago and established himself in Boston.»
18. The Syrian American Directory Almanac 1930, New York: Arida & Andria, 1929, pp. 17 and 43.

To read more about 'The Artist, The Poet, The Man' visit the news section of the Kahlil Gibran Collective here.

THE STRANGE CASE OF KAHLIL GIBRAN AND JUBRAN KHALIL JUBRAN

By Glen Kalem-Habib - 1 week ago
While his masterpiece The Prophet– originally published in English by Alfred Abraham Knopf in New York in 1923, and translated into at least 100 languages – is well-known by readers all over the world, the author’s biographical identity remains a mystery to most people: an American hippie writer or an old long-bearded Indian guru? The majority […]
Read story

By Glen Kalem-Habib - 1 week ago
" The Prophet …It is very inspiring. It is more or less a pattern for everyday living."  Marilyn Monroe Robert F. Saltzer - The New York Journal-America1 Marilyn Monroe was a self-educated literate, and it may come as a surprise to many that she was like most self-educated people, (including myself) an avid reader of just […]
Read story

By Glen Kalem-Habib - 1 week ago
“I have come to say a word...but if death prevents my word the book of eternity will not leave a word unspoken. What I do today in my solitude will be echoed tomorrow by the multitude.” - Kahlil Gibran Not long ago, I was asked to verify the official number of translations of Kahlil Gibran’s […]
Read story