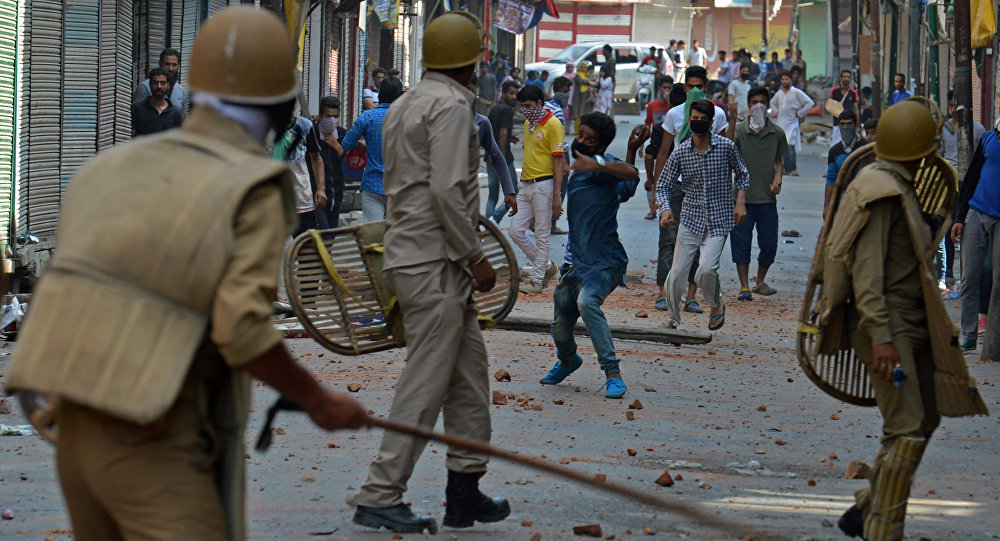 The Simla Agreement: Help or Hindrance

Dr. Ghulam Nabi Fai* — The mass uprising of the people of Kashmir against Indian military occupation has evoked two reactions from the Government of India. One is extreme repression and the second is the threat of war. On September 24, 2016, Mr. Narendra Modi, the Prime Minister of India made a formal statement with full authority: “Pakistan’s ‘awam’ (people), I want to say to you, India is ready to fight you.” He added, “We will isolate you. I will work for that.”

The world powers, including the U.S. has exerted no influence in restraining this belligerent rhetoric. There is also not the slightest sign yet of even a beginning being made towards a meaningful peace process, eliminating the danger of war between these two nuclear countries. The present situation has made it abundantly clear that the status quo in Kashmir is both unjust and untenable. It has thus thrown into sharp relief the urgent need for India and Pakistan to settle the 69-year old Kashmir dispute on a just and lasting basis.

The question arises: what should be the point of departure for determining a just and lasting basis? The answer obviously is (a) the Charter of the United Nations which, in its very first article, speaks of “respect for the principles of equal rights and self-determination of peoples” and (b) the international agreements between the parties to the dispute.

India and Pakistan have concluded multiple agreements which fall in this context. The first is embodied in the resolutions adopted by the United Nations Commission for India and Pakistan (UNCIP) on 13 August 1948 and second on 5 January 1949. These resolutions constitute an agreement because, unlike most resolutions of the Security Council, their provisions were first negotiated with the parties and, in written statements, explicitly accepted by them.

The first resolution is written out in detail and is self-explanatory. Since it binds both India and Pakistan to respect the verdict of the people of Kashmir to be obtained through a free vote under the impartial supervision of the United Nations. India seeks to propagate the impression that it has been superseded by the Simla Agreement. That the implication is false can be readily seen from a comparison of the two texts. But even if it were true, it would run counter to a standing principle of international relations which is set out in Article 103 of the Charter of the United Nations (accepted by every Member of the United Nations, including India). The Article says:

What, then, is the relevance of the Simla Agreement as far as instituting a peace process between India and Pakistan, fully recognizing Kashmiri’s inherent right of self-determination, is concerned?

The pertinent facts about the Simla Agreement are:

i. It was concluded in the aftermath of the India-Pakistan war of 1971 over what is now Bangladesh. Pakistan had suffered a decisive military defeat and 93,000 Pakistani prisoners-of-war were in Indian captivity. The factor of duress in thus obvious.

ii. Despite this circumstance, the Agreement nowhere precludes a settlement of the Kashmir dispute along the lines laid down by the United Nations with the consent of both India and Pakistan. Nor does it require that the United Nations be by-passed in the effort towards a settlement. On the contrary, it expressly says that the relations between the two countries shall be governed by the principles and purposes of the Charter of the United Nations. One of the basic principles of the Charter (Article 33) is to seek a solution of any dispute by negotiation, enquiry, conciliation, arbitration, judicial settlement, resort to regional agencies or arrangements or other peaceful means. The linked principle (Article 34) is that the Security Council may investigate any dispute and (Article 36) at any stage recommend appropriate procedures or methods of adjustment. The Simla Agreement thus reinforces the obligations of both parties to achieve a settlement in accordance with the resolutions endorsed by the Security Council and, if their bilateral efforts fail, to turn to the United Nations for assistance. Nothing would be more contrary to the Charter — and, therefore, to the Simla Agreement itself — than to bar recourse to the United Nations.

iii. The Simla Agreement makes mention of “a final settlement of Jammu and Kashmir” as one of the objectives of the two parties.

iv. It provides that, pending the final settlement of any of the problems between the two countries, neither side shall unilaterally alter the situation. This obviously is not a license for leaving problem unresolved. If anything, it implies a commitment to making efforts towards a final settlement.

vi. The position consistently maintained by Pakistan that the status of Kashmir shall be decided by an impartial plebiscite has been recognized by the United Nations and, as it is identical with the position which India itself originally assumed at the world body, it is reflected in more than dozen substantive resolutions of the Security Council. A position safeguarded by the phrase “without prejudice to” can hardly be deemed to have been abandoned.

vii. In its preamble, the agreement states the resolve of the two governments to establish durable peace in the subcontinent. Durable peace results from setting the outstanding disputes, not from denying its existence.

It is thus a misconception that the Simla Agreement has in any way superseded the resolutions of the United Nations accepted by both parties. Nor can it be supposed to have narrowed the gulf between them and, to that extent, simplified the task of evolving a settlement. Even if it has done so, its impact on the Kashmir situation would have been open to question. Nothing in international law confers on two parties the authority to make decisions or conclude agreements which adversely affect the rights of a third. The third party here is the people of Kashmir.

Why is the Simla Agreement put in the forefront rather than the resolutions of the United Nations? There can be several explanations. One is deference to India because of its superior might. If this motivates the current diplomatic stance of the world powers, including the United States, it is, to say the least, undignified and contrary to the enduring principles of U.S. policy towards all situations which involve inalienable human rights. Another reason can be the impression that the Simla Agreement, being of more recent origin than the resolutions of the United Nations, might be more effective in activating the process. This is wrong in view of the fact that, for 44 years, the Agreement has signally failed to shake India out of its obdurate refusal to negotiate a settlement of the Kashmir problem. The current Indian position is that India is prepared to talk but there is nothing to talk about except how to crush the popular resistance in Kashmir and perpetuate the status quo.

If non-implementation were to render an agreement defunct, then the Simla Agreement is in no better state than the earlier, far more concrete and comprehensive resolution painstakingly worked out by the United Nations and concluded under its auspices in 1948-49. If passage of time were allowed to extinguish solemn international agreements, then the Simla Agreement has already suffered the same fate as the resolutions of the United Nations. If agreements are to be revived, then why one and not the other?

A sincere and serious effort towards a just settlement of the Kashmir dispute must squarely deal with the realities of the situation and fully respond to the people’s rights involved in it. The Simla Agreement does neither. Indeed, it was not intended to do so; at best, it is reticent on the issues that need to be grappled with. A peace process mounted on its fragile platform is bound to collapse. Indeed, any process that ignores the wishes of the people of Kashmir and is designed to sidetrack the United Nations will not only prove
to be an exercise in futility but can also cause incalculable human and political damage.

*Dr. Fai is the Secretary General of World Kashmir Awareness

The article reflects the authors views and not necessarily The Levant News views.