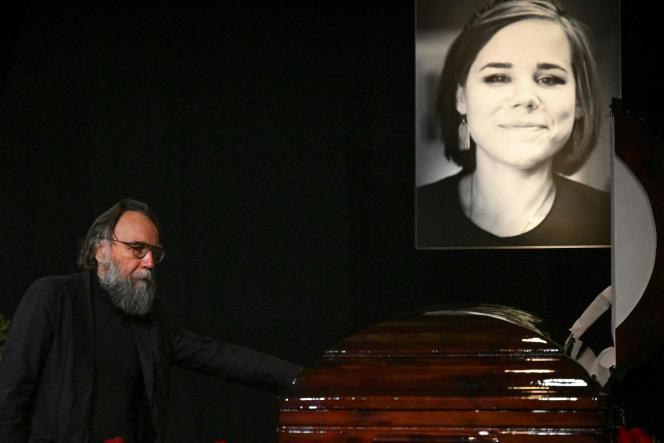 Image credits: Russian ideologue Alexander Dugin attends a farewell ceremony for his daughter Daria Dugina, who was killed in a car bomb explosion the previous week, at the Ostankino TV centre in Moscow on August 23, 2022. Daria Dugina followed in her father's footsteps, becoming a well-known media personality who worked for pro-Kremlin television channels including Russia Today and Tsargrad. (Photo by Kirill KUDRYAVTSEV / AFP)

One of the potential consequences of last weekend’s tragic car bomb killing: a wider and even costlier war.

One of them I tweeted right away: This could lead to escalation of the Ukraine war, since Russia will blame Ukraine for the murder (which Russia has now officially done), stoking a thirst for revenge and, in particular, inflaming Dugin’s already belligerent fan base.

The second thought was a byproduct of the first. The prospect of sudden escalation reminded me of a podcast conversation I listened to seven weeks into the war—a conversation that left me more worried than ever that American foreign policy is not in capable hands. The killing of Dugina, in a roundabout way, corroborates that worry.

The conversation was between Ryan Evans, host of the War on the Rocks podcast, and Derek Chollet, who, as Counselor of the State Department, reports directly to Secretary of State Antony Blinken. Chollet was recounting diplomatic discussions between Moscow and Washington that had taken place before the invasion. He said something that had never before been officially confirmed: The US had refused to negotiate with Russia about keeping Ukraine out of NATO.

What bothered me wasn’t this disclosure; I’d already gathered (and lamented) that the Biden administration had refused to seriously engage Russia’s main stated grievance. What bothered me—and kind of shocked me—was how proud Chollet seemed of the refusal.

After all, when negotiations aimed at preventing the invasion of a nation you’re friends with are followed by the invasion of that nation, that’s not success, right? Apparently by Chollet’s lights it was.

As Evans pressed him to explain why the US had refused to discuss NATO expansion, Chollet justified that stance by pointing to its consequences. With war now underway, and Putin’s opening bid to take Kyiv having failed, and a “long and bloody fight” taking shape in the Donbas, it was clear to Chollet that “Russia will come out of this weaker.” So, “for Putin, you’re hard pressed to see how this is in any way a win for him.”

One thought that didn’t seem to cross Chollet’s mind was that this war could wind up being a loss for Putin but also a loss for the US and Ukraine. As the pioneering game theorist Thomas Schelling emphasized in his classic 1960 book The Strategy of Conflict, war is a non-zero-sum game, replete with possibilities for lose-lose outcomes. Indeed, sometimes the mutually devastating potential of war is so great—as when it could lead to a nuclear exchange—that avoiding the war constitutes a clear win-win outcome. Recognition of this fact has led some past presidents to engage in actual, serious diplomacy. Makes me nostalgic.

I don’t want to suggest that Chollet was oblivious to the costs of this war for Ukraine. In addition to the “long and bloody” fighting to come in the Donbas and elsewhere, we were already seeing, he said, “the greatest refugee crisis in Europe since World War II.” But all this seemed to pale by comparison with the fact that “this has already been a strategic failure for Russia, and I think a strategic defeat for Russia.”

When he said this—back in mid-April—I thought: Do we really know that? Do we know that this war won’t consolidate Putin’s base at home while leaving Russia with big chunks of Ukraine and strong enough ties to enough powerful countries (like China) to feel secure? Indeed, do we know that Russia won’t eventually turn the tide and wind up with all of Ukraine east of the Dnieper River, plus the southern coast all the way to Odessa? Wars that go on a long time have twists and turns and sudden surprises.

Such as the killing of Daria Dugina. I have no idea who killed her or why, but the belief in Russia that Ukraine did it may be powerful enough to bring a response more enduring than one-off retaliation. Depending on how skillfully Putin harnesses the narrative of Ukrainian complicity, the murder could wind up helping Russia’s military recruiting—something he desperately needs, as he wants to avoid a general mobilization yet still replenish an exhausted army. Given such a boost—and given the waning of European support for Ukraine that high energy prices may bring this winter—who knows what spring will bring?

The consequences of Dugina’s killing will be hard to trace and may never be clear. But there are various ways you can imagine a wider and ultimately catastrophic war being one of them. For example: Russian officials say Dugina’s killer escaped into Estonia. Will Moscow demand that Estonia return the suspect or else face military punishment? Probably not. But one Russian politician has already raised that possibility, and the chances of it happening certainly aren’t zero. And if military action did ensue, that would mean Russia had attacked a NATO country—a country other NATO members would be duty-bound to defend. And the rest could be history.

Last week John Mearsheimer (who seven years ago predicted eventual Russian invasion if the NATO expansion issue wasn’t addressed) published a piece in Foreign Affairs warning that as this war drags on, “catastrophic escalation” is a real possibility. Some people dismissed scenarios he sketched as conjectural. Yet exactly one day after his piece appeared, the real world provided us with a new scenario: daughter of iconic Russian nationalist murdered, leaving her aggrieved father to whip up support for a longer and bloodier and possibly wider war. Every day of every war brings the possibility of an unsettling surprise.

It’s not shocking, in light of twentieth-century American history, that people like Chollet seem to see conflict with Russia as zero-sum. During the Cold War, we scanned the world and saw country after country as being in either our camp or the Soviet camp. If you could flip a country from their camp to ours, that would be a gain of one for us and a loss of one for them. Zero-sum.

But even back then people recognized that nuclear war would be radically non-zero-sum. That’s one reason presidents tried to stay a long way from actual conflict with Russia. Eisenhower was an aggressive cold warrior, supporting coups or insurgencies in the Middle East, Latin America, and elsewhere, but the closer the action got to Russia’s borders, the less he wanted to do with it. In 1956, Hungarian freedom fighters tried to remove their country from the Soviet sphere of influence, and Russia invaded to secure control, and Eisenhower said to the freedom fighters: Best of luck, but you’re on your own.

Conflict with Russia is even more non-zero-sum now than it was during the Cold War. Nuclear war remains as horrifying as ever, and, in addition, there are new threats that call for international cooperation of a kind that’s harder to muster amid strife. We need to address climate change, prevent pandemics and the genetic engineering of massively lethal bioweapons, prevent an arms race in space, and so on. Cooperation in these and other areas is less likely to progress amid war or cold war.

Listening to Chollet talk about what a strategic loss this war is for Putin, I was struck by how excited he sounded about that and by how youthful and naïve his excitement seemed. It would have been poignant if it weren’t scary. And I’ve seen no evidence that his boss at the State Department is more reflective than he is. Our foreign policy seems driven by two main impulses—macho posturing and virtue signaling—that work in unfortunate synergy and leave little room for wisdom.

Bringing this tragic war to a close is something that’s hard to do in the near term and is impossible to do without painful compromise. But I see no signs that the US is even contemplating such an effort, much less laying the groundwork for it. I worry that Chollet’s attitude in April—what seemed like a kind of delight in the prospect of a war that is long and costly for Russia—may still prevail in the State Department. So it’s worth repeating: