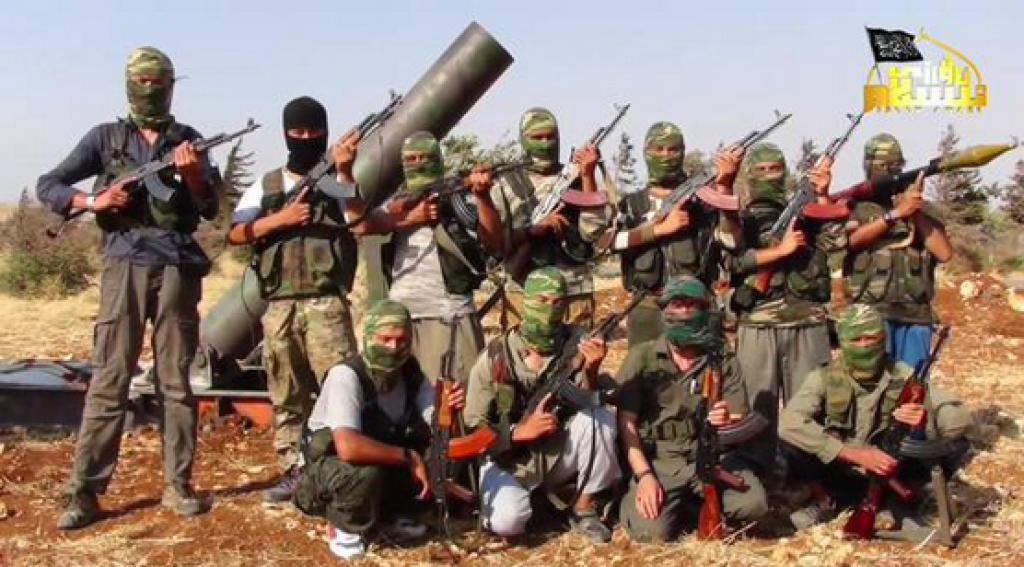 The Hidden Message of the Turkistan Islamic Party's Parade

The rare military parade organized by the "Turkistan Islamic Party" on the Aleppo-Latakia highway, distributing its pictures on Tuesday, is not a farewell parade. It is a declaration of the party's entry into a new phase.

It was natural for the parade to include a speech by the party's leader, Sheikh Abdulhak, in which he directed severe threats to China, which is considered the number one enemy in the party's literature because of the Uighur cause in Xinjiang province.

The TIP fighters, who maintained their relative independence in their relationship with other jihadist organizations, did not hide that their participation in the fighting in Syria was for two reasons: the first was saving the people of Syria as Muslims who were oppressed by the regime. The second, and just as important, because it means fighting against an ally of the Chinese regime.

In the “Islamic Turkistan” magazine, which publishes in the Arabic language, the TIP is clearly defined as "a group of workers of Islam and Mujahideen in the cause of Allah for the liberation of East Turkistan" (Xinjiang). Therefore, the strategy of the TIP from the beginning is to consider the Syrian arena as a practical training camp for its cadres and fighters to take advantage of these combat experiences that will accumulate in support of their ultimate goal which is the establishment of an independent state in East Turkistan, i.e. Xinjiang.

The parade itself is not the first of its kind. The TIP has already organized other parades, such as the parade of the city of Jisr al-Shughour in the Idlib countryside last July, and sparked a storm of speculation about the party's total control of the city and the withdrawal of the "Nusra front" from it. But the new parade is different in many ways, both in terms of the quality of its organization and how to get it out, or the intended announcement of it by the party officially.

This parade was preceded by vigorous activity by TIP fighters, collecting their share of the spoils of war and accumulating their financial rewards. This activity does not imply a change in the behavior of the TIP fighters. In all their battles, they fought to share the spoils of war and claim their share. Even the prevailing narrative about their refusal to participate in removing the second "siege" of the eastern area of Aleppo city, was because they did not receive the spoils of the first battle, which was considered by military analysts as one of the reasons for the failure to the lift the siege.

In the context of the accumulation of resources – through the theft of public property under the name of booty – the TIP dismantled the railway line between the Zizun station and the village of Ashtarb in the countryside of Idlib. Before that they dismantled the Zizun thermal plant, which is estimated to cost tens of millions of dollars, and sold the scrap for less than a fifth of its price. The same is true for the excavation of the archaeological hill of Karkur in the plain of Al-Ghab in September.

It is no secret that the TIP, like other jihadist organizations, was considered loyal to Turkey, militarily and politically. The latter formed a conduit for crossing the convoys of TIP fighters into Syrian territory throughout the years of the Syrian war. Ankara has opened bridges to supply them with weapons, money, operational maps. In addition, Ankara has for decades adopted a policy of solidarity with the Uighurs against Chinese policy, which has made the spectre of the spread of Uighurs in Turkish areas commonplace, the result of the waves of the displaced.

But it was not that easy, because Ankara, through its media, tried in conjunction with the boom of military revolt in Syria between 2012-2013, to promote the idea that the migration of the Uighurs to Syria came from the machinations of Chinese intelligence, meant to portray them as associated with the Nusra Front and ISIS.

Turkish-Chinese relations have witnessed tensions over Ankara's stance on the Uighurs. This gives the question of the TIP combatants unambiguous regional and international dimensions.

However, this page has collapsed, and a new chapter has opened up, not only in terms of Sino-Turkish relations, but also in Ankara's relationship with Moscow and Tehran, which in practice reflected the opening of the Astana process and the accession of Turkey to the “Troika of the Guarantor States”.

In August, Ankara promised China security cooperation on the issue of Uighurs in Syria. This promise is yet another manifestation of rapprochement between the two countries after decades of tension and mistrust.

The leadership of the TIP sensed the Turkish changes, but a source close to the party described the Turkish steps as a "lifting of the regional cover" of the party and its fighters. The Turkish influence on the party has diminished in Syria since then, which was manifested in the fact that the fighters of TIP and the “Hayaat Tahrir Al-Sham” against “Ahrar Al-Sham" and was one of the few cases in which they intervened in the inter-factional fighting, although the purpose was to circumvent Ankara's strategy and prevent it from reproducing the "Euphrates Shield" and implementing it in Idlib.

However, the TIP continued to tend to be more strained relations with Ankara, because it is an indispensable regional body to support the Uighurs cause, said the source itself.

Thus, the TIP has faced an unprecedented Turkish restriction in its support and facilitation of its movements, similar to other factions confronted by Ankara with two possibilities, either the implementation of the Turkish agenda arising from its understandings with Moscow and Tehran, or the interruption of support for them. This is in addition to the lack of options available to them under the Astana agreement and Ankara's involvement in its implementation, and the realization of the leaders of the party that the stage of political abandonment of foreign fighters has already begun in Syria, "and the smart are the ones who survive."

Therefore, the rare military parade organized by the party's fighters comes as show of strength, despite the destabilization of relations with Ankara. It also aims to present its credentials to regional and international bodies that may have an interest in borrowing them from Turkey at this stage.