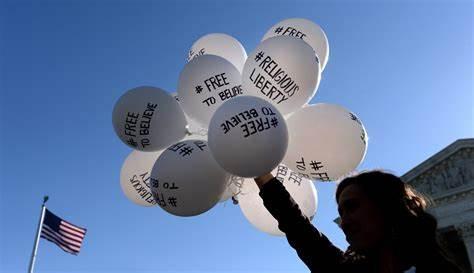 There was an interesting bit of news reported on 21 June 2022 in the regional section of the Philadelphia Inquirer.* It was entitled “Talk by Christian nationalists brings a backlash.” As the location tells us, it was not front page news—but it should have been. Here is a synopsis of the story.

Michael Price, co-owner of the Tied House restaurant in Philadelphia, agreed to allow two friends to use the restaurant premises for a “discussion” on “whether Pennsylvania should be an explicitly Christian state.” There was an immediate backlash. Four employees quit in protest and there was a falloff in the number of customers.

Mr. Price was surprised by the reaction. “They just wanted to have a discussion,” he said of his friends’ plans, and “having grown up in America where we have free speech and exchange of ideas, it’s just my position people should be allowed to have an opinion without a backlash.” He seemed not to consider the possibility that what was really planned was part of a venture that, if successful, would greatly restrict or destroy free speech in a “Christian” state of Pennsylvania. Both speakers shared the same beliefs, among which were the Bible is inerrant, gay people are “pagans” spreading “abominable messages,” and there should be no separation of church and state. At present, most Pennsylvania politicians (and just about all the Republicans) are not willing to challenge such beliefs held by voting citizens of the state.

Mr. Price also claimed that his friends are open to an honest debate on these issues. He says people who think differently should do as he would: “I would show up at the debate and tell of them why I think they are wrong about it.” However, as described in the article, his friends think that they are agents of God and answers to all issues are found in the Bible. Such people have their identity bound to a cult-like movement. They are looking for converts, not debaters. Why worry about this? Is Christian nationalism just a crazy movement that is not going to attract many people? This sort of dismissal is dangerous. Many more moderate Christians view Christian Nationalism as “the single biggest threat to America’s religious freedom.” Islamophobia has become temporarily passé.

Mr. Price’s Christian Nationalists are but one example of the dark side of free speech. There is also the issue of false and misleading statements that rise the level of defrauding the public on a mass scale. Take the QAnon movement, led by an unnamed person or group which anonymously posts messages on social media describing a “reality-warping” conspiracy theory that “Satanist pedophiles who run a global child sex-trafficking operation control the government and other major institutions.” It just so happens that most of these powerful perverts are liberals. However, not to worry, because “a coming storm will sweep [these corrupt] elites from power and that violence might be necessary to save the country.” One might argue that the QAnon postings are so bizarre that no otherwise sane person would take them seriously. Alas, this is not the case. According to a New York Times report, “41 million Americans [16% of the population] believe QAnon” conspiracy pronouncements. This makes QAnon as popular as some of America’s major religions.

Other scam-like behavior has invaded and just about taken over politics under the cover of free speech. The most obvious and widespread of these is the regularly unreliable—and purposefully so—pronouncements of politicians and other public officials. Just to take a modern example, according to the Washington Post, over four years ex-President Trump made over 30,000 false or misleading claims with no accountability. This will be a very hard record to beat. A campaigning politician often does not speak his or her own mind, much less worry about accuracy. He or she may simply follow a party line. If the party wins the election, the campaign pronouncements will likely have little to do with later policy. As it turns out, policy is formed in response to wholly different pressures than campaign promises. There are usually no real consequences for defrauding the public in this way. It is all free speech and it is perfectly legal.

A recent example of this is the “free speech” behavior of the (Trump-appointed) members of the Supreme Court, particularly Brett Kavanaugh. Kavanaugh, testifying under oath in his confirmation process, described Roe v. Wade as “settled precedent” and went on to tell Senator Susan Collins of Maine, in a private conversation (according to notes taken by several aides), “Roe is 45 years old, it has been reaffirmed many times, lots of people care about it a great deal, and I’ve tried to demonstrate I understand real-world consequences, I am a don’t-rock-the-boat kind of judge.”

Collins subsequently said that she believed Kavanaugh had “misled” her. And she described the quick overcoming of Roe v. Wade this way, “Throwing out a precedent overnight that the country has relied upon for half a century is not conservative,” she said in a statement. “It is a sudden and radical jolt to the country that will lead to political chaos, anger and a further loss of confidence in our government.”

Senator Joe Manchin III of West Virginia, who also privately interviewed Kavanaugh and, earlier, Justice Neil Gorsuch on the issue of Roe v. Wade, had a similar experience. “I trusted Justice Gorsuch and Justice Kavanaugh when they testified under oath that they also believed Roe v. Wade was settled legal precedent and I am alarmed they chose to reject the stability the ruling has provided for two generations of Americans.”

Senator Richard Blumenthal, Democrat of Connecticut, was less polite. He accused Kavanaugh and the other Trump nominees of “rank deception.” Finally, Brian Fallon, the head of the progressive judicial advocacy group Demand Justice, summed up the situation this way: “The hearings are an insult to everyone’s intelligence at this point. The willingness to allow these nominees to answer in bromides, if they answer questions at all, is a relic of a time when the court was considered above politics. That era is long gone now.”

For the remainder of this article, please follow this link at To The Point Analysis