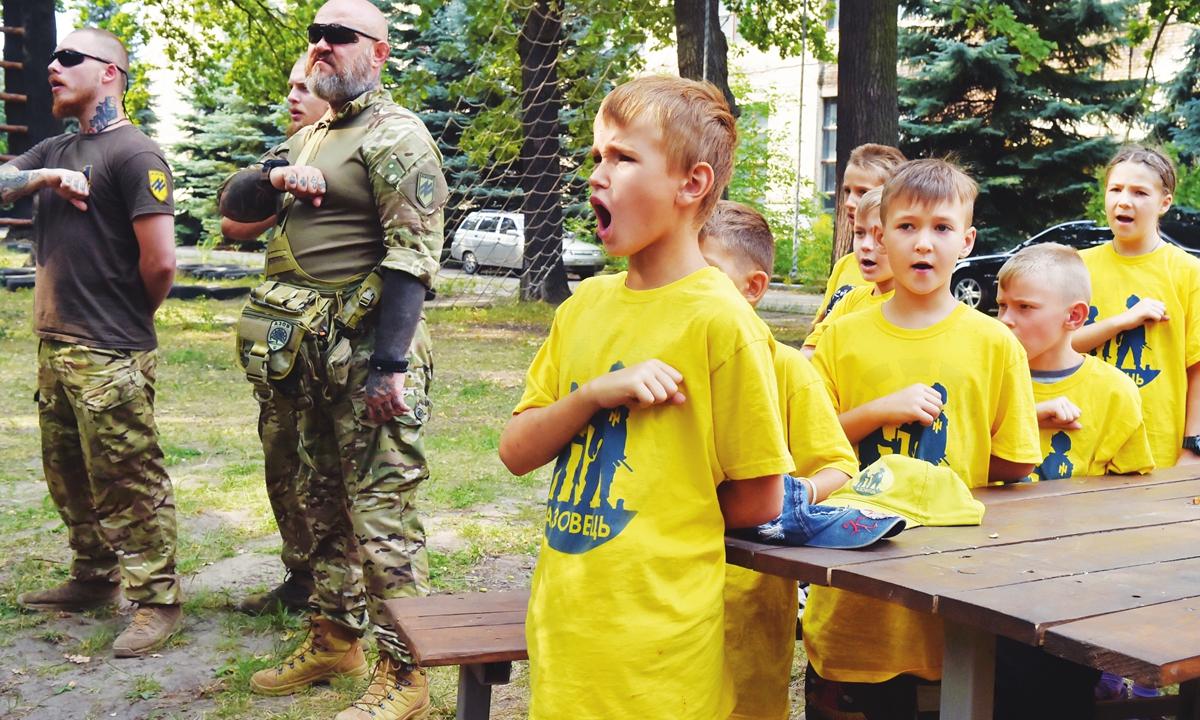 Image credits: Vacationing children undergo military training at a Ukrainian volunteer battallion base for the Azov far-right Uklrainian volunteers battalion, in Kiev on August 14, 2015 prior to the adults leaving to the battle fields of eastern Ukraine.Two people were killed in another round of intense shelling between Western-backed Ukrainian government's forces and pro-Russian fighters in the separatist east, officials from both sides said. Ukraine's military spokesman Andriy Lysenko said one soldier was killed and six wounded in the past 24 hours of fighting across the mostly Russian-speaking war zone. AFP PHOTO/ SERGEI SUPINSKY (Photo by Sergei SUPINSKY / AFP)

The CIA May Be Breeding Nazi Terror in Ukraine

The US government has a well-documented history of backing extremist groups as part of a panoply of foreign policy misadventures, which inevitably end up blowing up in the American public’s face.

In the 1960s, the CIA worked with Cuban anti–Fidel Castro radicals who turned Miami into a hub of terrorist violence. In the 1980s, the agency supported and encouraged Islamic radicals converging in Afghanistan, who would go on to orchestrate the September 11 attack. And, in the 2010s, Washington backed Syria’s not-so-“moderate” rebels who ended up cutting a swath of atrocities through civilians and the Kurdish forces that were meant to be US allies.

Based on a new report, it looks like we may soon be able to add another to that list of fatally unlearned lessons: Ukrainian neo-Nazis.

According to a recent Yahoo! News report, since 2015, the CIA has been secretly training forces in Ukraine to serve as “insurgent leaders,” in the words of one former intelligence official, in case Russia ends up invading the country. Current officials are claiming the training is purely for intelligence collection, but the former officials Yahoo! spoke to said the program involved training in firearms, “cover and move,” and camouflage, among other things.

Given the facts, there’s a good chance that the CIA is training actual, literal Nazis as part of this effort. The year the program started, 2015, also happened to be the same year that Congress passed a spending bill that featured hundreds of millions of dollars’ worth of economic and military support for Ukraine, one that was expressly modified to allow that support to flow to the country’s resident neo-Nazi militia, the Azov Regiment. According to the Nation at the time, the text of the bill passed in the middle of that year featured an amendment explicitly barring “arms, training, and other assistance” to Azov, but the House committee in charge of the bill was pressured by the Pentagon months later to remove the language, falsely telling them it was redundant.

Despite sometimes open acknowledgement of its Nazism — its former commander once said the “historic mission” of Ukraine is to “lead the White Races of the world in a final crusade for their survival” in “a crusade against the Semite-led Untermenschen” — Azov was incorporated into the country’s National Guard in 2014, owing to its effectiveness in fighting Russian separatists. US arms have flowed to the militia, NATO and US military officials have been pictured meeting with them, and members of the militia have talked about their work with US trainers and the lack of background screening to weed out white supremacists.

Given all this, it would be more of a surprise that the neo-Nazis of Azov haven’t been trained in the CIA’s clandestine make-an-insurgency program. And we’re already seeing the early signs of blowback.

“A number of prominent individuals among far-right extremist groups in the United States and Europe have actively sought out relationships with representatives of the far-right in Ukraine, specifically the National Corps and its associated militia, the Azov Regiment,” states a 2020 report from the West Point US Military Academy’s Combating Terrorism Center. “US-based individuals have spoken or written about how the training available in Ukraine might assist them and others in their paramilitary-style activities at home.”

A 2018 FBI affidavit asserted that Azov “is believed to have participated in training and radicalizing United States–based white supremacy organizations,” including members of the white supremacist Rise Above Movement, prosecuted for planned assaults on counterprotesters at far-right events, including the Charlottesville “Unite the Right” rally that Joe Biden later co-opted as a rationale for his presidential campaign. While it seems the perpetrator of the Christchurch mosque massacre didn’t travel to Ukraine as he claimed, he clearly took inspiration from the far-right movement there, and wore a symbol used by Azov members while carrying out the attack.

Since taking office, Biden has launched an incipient domestic “war on terror” on the basis of combating far-right extremism, even though the strategy is quietly aiming to target left-wing protesters and activists, something it has already done. Yet at the same time, three separate administrations, Biden’s included, have been providing training, weapons, and equipment to the very far-right movement that’s inspiring and even training those same white supremacists.

Destroying the Village to Save It

Adding to the absurdity here is that the reason Washington has been giving Ukrainian Nazis its assistance is so they can serve as a bulwark against Russia, which war hawks liken, as they always do, to Adolph Hitler’s regime and its expansion through Europe in the 1930s. While Vladimir Putin’s Russia may be a malevolent actor on a number of fronts, Putin’s recent incursions into neighboring states like Ukraine are driven largely by the expansion of the NATO military alliance up to his borders and the security implications that come with it.

In other words, to stop what US hawks classify as the next Hitler and Nazi Germany, Washington has been backing literal neo-Nazi militias in Ukraine, who are in turn communicating with and training homegrown white supremacists, which Washington in turn is ramping up a menacing repressive bureaucracy at home to counter. It’s what some have called the “self-licking ice cream cone” in action — the US national security establishment creating the very threats that justify itself. Instead of defusing the tensions by simply agreeing to long-standing Russian demands to set a hard limit on NATO’s eastward expansion, Washington has apparently decided that unlimited planetary military dominion is so important that it would rather just get into bed with actual fascists.

The US alliance with Nazi-infected Ukraine has already proven awkward for a president who is both trying to strike a contrast with his far-right predecessor and establish the United States as the leader of a global effort to strengthen democracy. Late last year, in a vote that went completely unreported in the press, the United States was one of just two countries (the other being Ukraine) to vote against a UN draft resolution “combating glorification of Nazism, neo-Nazism and other practices that contribute to fueling contemporary forms of racism.” Both countries have consistently voted against this resolution every single year since 2014.

The Biden administration deployed a nearly identical, boilerplate explanation for its no vote that Donald Trump had used, citing the constitutional right to free speech even for those with repugnant views. But this concern is hard to square with the text, which simply expresses concern about public memorials, demonstrations, and rehabilitation of the Nazis, condemns Holocaust denial and hate violence, and calls on governments to eliminate racism through education and addressing far-right terrorist threats — all roughly the same as Biden’s own rhetoric and policies.

Washington’s real concern here lies in its description of the resolution as “thinly veiled attempts to legitimize Russian disinformation campaigns denigrating neighboring nations” — meaning Ukraine. But Ukraine’s connections to modern Nazism are far from Russian fake news, and are in fact extensive and well-documented: from Azov’s official incorporation into the ranks of Ukrainian law enforcement and government officials with far-right ties to state-sponsored tributes to Nazi collaborators and promotion of Holocaust denial.

It’s no small irony that the US president, elected in large part to halt the perceived march of fascism at home, is continuing long-standing US support for literal Nazis in what might well be the nexus of international fascism. And if these Ukrainian Nazis really are among the insurgents being trained by the CIA, it will be no small tragedy if they one day take the same career trajectory as Osama bin Laden.

Branko Marcetic is a Jacobin staff writer and the author of Yesterday's Man: The Case Against Joe Biden. He lives in Chicago, Illinois.