Tanner Fox, 14, of Pico Rivera, shows support for El Rancho teacher Gregory Salcido, who was put on administrative leave following an anti-military tirade, during a protest outside El Rancho High School and Pico Rivera City Hall on Friday, Feb. 2, 2018. Salcido is also on the Pico Rivera City Council. "He gave me inspiration to follow my dreams. Now I can speak up for myself," said Fox of his support for Salcido. (Photo by Sarah Reingewirtz, Pasadena Star-News/SCNG)

Teacher who called military ‘lowest of the low’ is fired

A Southern California teacher who was recorded bashing the U.S. military in a profane classroom rant was fired Tuesday evening. 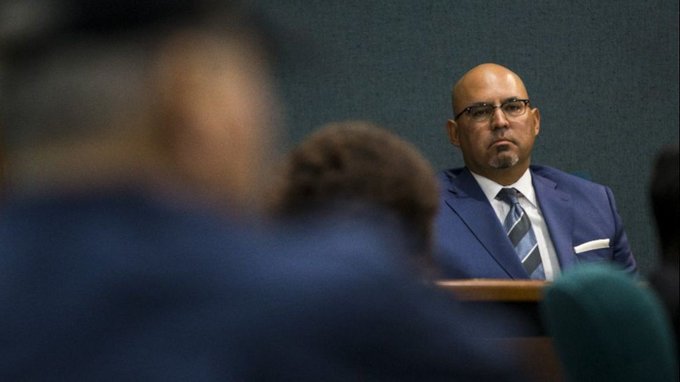 “His comments do not reflect what we stand for, who we are,” Villon said, adding that “the classroom should never be a place where students feel that they are picked at, bullied, intimidated.”

“His comments do not reflect what we stand for, who we are. The classroom should never be a place where students feel that they are picked at, bullied, intimidated.”

– Board of Education President Aurora Villon

Salcido faced a severe backlash after a student secretly recorded him asking his government class why they would want to serve in the military, calling those who serve “dumbs‑‑‑s.”

“Think about the people who you know who are over there. Your freaking stupid Uncle Louie or whatever. They’re dumbs‑‑‑s,” Salcido can be heard saying in the Jan. 25 tirade.

“They’re not like high-level thinkers, they’re not academic people, they’re not intellectual people. They’re the lowest of our low.”

Villon said thousands of emails flooded the school board, as veterans and relatives of military personnel from all over the world voiced their disgust with Salcido’s comments.

Salcido apologized at a City Council meeting in February, the paper reported, and attempted to clarify that his comments “had nothing to do with their moral character.”

“I don’t think it’s all a revelation to anybody that those who aren’t stellar students usually find the military a better option. … That’s not a criticism of anybody. Anything I said had nothing to do with their moral character,” he said, the paper reported.

During a break, he told reporters that he believes the military is the not the “best option” for his students, but added “that does not mean I’m anti-military, because I’m not.”

The student who secretly recorded Salcido — later identified by KTLA-TV as Victor Quinonez — told Fox News opinion writer Todd Starnes in January that his teacher had “a history of being anti-military.”

“Everyone’s entitled to their own opinion but at the same time they shouldn’t be disrespecting the veterans who have fought for our rights, who give up their lives and do stuff that other people are not willing to do,” Quinonez, who says he wants to be a Marine, told Fox News.

The rant even prompted a strong reaction from White House Chief of Staff John Kelly, who said Salcido “ought to go to hell.”

“I just hope he enjoys the liberties and the lifestyle that we have fought for,” Kelly, a retired Marine Corps general, told Fox News host Brian Kilmeade.

Previous Oil & gas sector ill-equipped to deal with cyber risks
Next Texas Bombing Suspect Blows Himself up as Police Close In: Officials