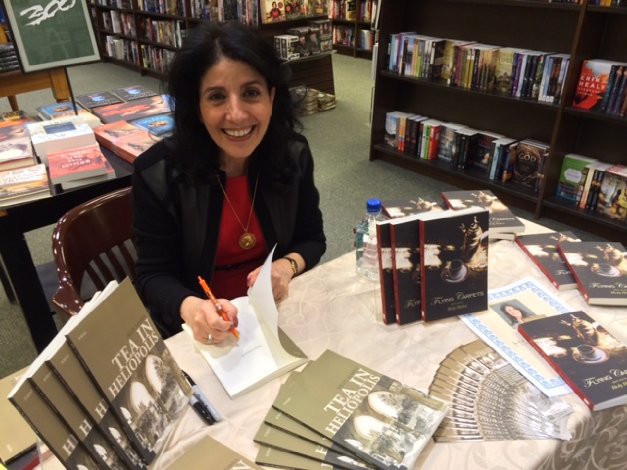 The Taste of the Earth: Medallions of Memory in the Poetry of Hedy Habra

In June 2020, I had the good fortune to attend a virtual poetry reading where Hedy Habra, author of the recently-published poetry collection, The Taste of the Earth, read selections from her work. The reading was organized by the journal Indelible and sponsored by The American University of Dubai. Habra described The Taste of the Earth as representative of her origins, roots, losses, and displacement.  To introduce her poem, “Vanishing Point,” she described her memory of leaving Lebanon during the civil war in 1975. Her husband planned to take her and their children to Beirut’s airport, but to get there they had to cross a bridge surveilled by snipers. She remembered wondering if they would survive the crossing.

Under a dark moon that has decided to keep silent, I wander

along the street of chance, staring at the vanishing point

uncertain of the odds of being, but with the certainty that it

leads to the sea.

Hedy Habra’s poetry and art are evocative reflections of her experiences, languages, and memories. Her recent collection, The Taste of the Earth, contains eloquent words encased in pantoums, meditations, free verse and prose. 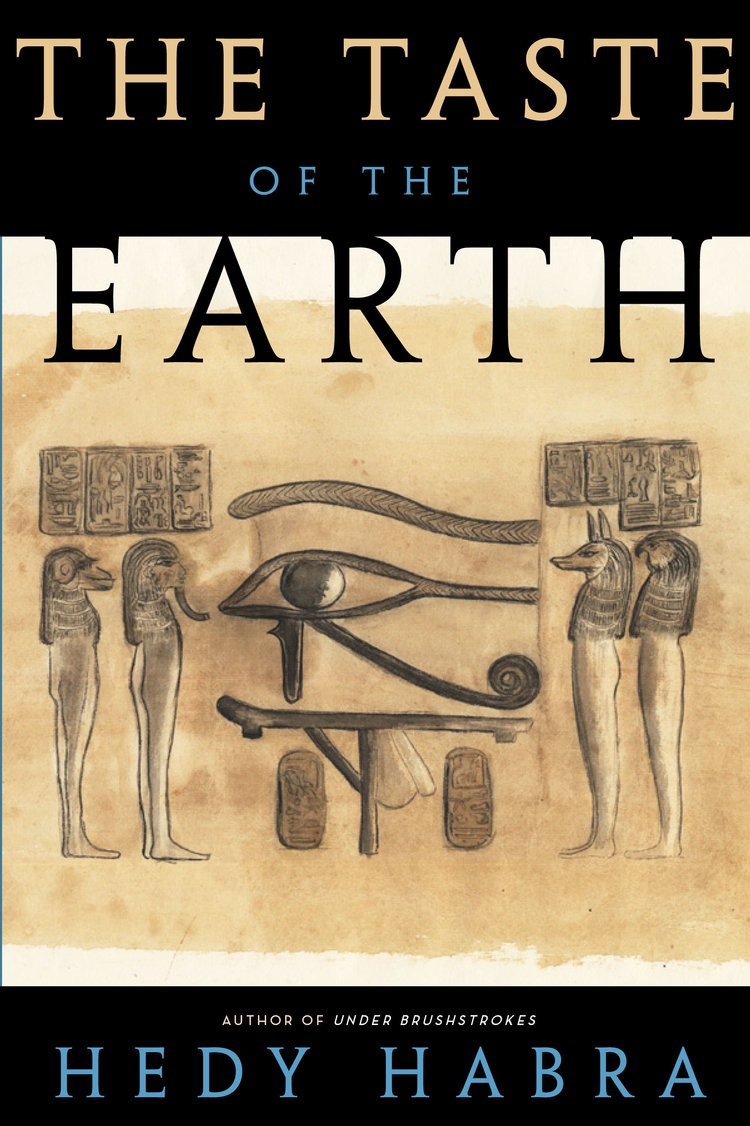 Habra was born in Heliopolis, Egypt, and is of Lebanese heritage. The Taste of the Earth’s cover illustration, “The Sons of Horus,'' was painted by Habra. The image depicts the Eye of Horus, a symbol of protection known as Wadjet, surrounded by the Sons of Horus. It is a nod to Egypt, her birthplace. Horus was an Egyptian god associated with kings and the heavens. The four Sons of Horus were believed to be escorts of the dead to the afterlife. When bodies were prepared for burial, the deceased’s organs were placed in four canopic jars representing the four sons. The organs were to be used by the deceased after rebirth. In this collection, Habra includes a prose piece titled “Meditations Over the Eye of Horus,” She reflects on the six senses represented by the six parts of Wadjet.  The first meditation is on the sense of smell.

From “Meditations Over the Eye of Horus:”

the Beloved compared Solomon to a cluster of henna blossoms,

his cheeks were beds of spices: he was a bundle of myrrh resting

The Taste of the Earth is Habra’s third book of poetry. In her signature poem, she sets the tone for the themes of origins and displacement that meander through the book.

In “The Taste of the Earth” poem:

for an oasis, a fawn melts into the music of a fable,

anchoring us farther with each shoot spreading from our

birthplace to everywhere we’ve lived, to where we live

now, and does it make a difference if the root remembers?

Habra has lived in Lebanon, Greece, Belgium and the United States and speaks several languages including English, French, Spanish, Italian, and Arabic with a new exploration of Chinese language and art in progress. In her poem “Topography” she reflects on the costs of these journeys.

Sometimes I think my face is a map

each line a faint record of hidden scars

In a recent interview, I asked Habra what motivated her to begin writing creatively.  In accordance with her poetic nature, she alluded to her memories as medallions.

When I came to the states in the 80s, I was always explaining (experiences) in detail and I found that the best way was to write down short stories about my life because people would be surprised that my first language is French (...) people have preconceived ideas and every country in the Middle East is completely different and so it was just a personal trajectory. It was what led me to try to put together different medallions of different times in my life.

The Taste of the Earth is divided into five sections.  In Part I, Habra considers the past and the nature of memory. In Part II, she offers “Meditation Over Phoenician Letters,” a contemplative examination of the ancient alphabet originating in the land of her heritage, Lebanon. The meditations lead us into Part III and poems where Habra explores her memories of Lebanon. Part IV is her “Meditations Over the Eye of Horus” and Part V brings us to Egypt and Syria, especially Cairo, Damascus, and Aleppo, all places of significance during the Arab Spring. One particularly poignant poem is titled “The House in Aleppo that I Would Never Get to See” where she muses on a house she only knows through family stories that, due to the Syrian civil war and destruction of Aleppo, she will never get to see.

From “The House in Aleppo that I Would Never Get to See:”

I’ve lived in this house through stories told

by my grandmothers in Heliopolis, and

I asked Habra about her inspiration for writing her poetry and how she chooses poetic forms. She acknowledged that she is guided by poetic forms, and she also mused on how her meditations came into being.

I always think about the forms and the choices that poets are making... When I wrote the two meditations, I started improvising and it seemed like the poems themselves - they wanted to be written. The “Meditation over the Eyes of Horus” was a constrictive form because each section had to be symmetrical. I don't know. I just felt that that topic about taste, smell, and touch - that could only be expressed in that way.

Hedy Habra’s life experiences are a mosaic of places and languages which lend a special intellect to her work. It is notable that in addition to working and publishing in English, she holds a Ph.D. in Spanish Literature and teaches Spanish at Western Michigan University. She also publishes academic work in Spanish. She explained her early influences:

I grew up with three languages and my grandmother Nona was living with us at one point. She was schooled in Italian so she spoke a little bit of Italian but in Egypt when you went to the movies and we went twice a week the movies were not dubbed they were subtitled in two or three languages so we were exposed to different languages.

I asked Habra how her knowledge of multiple languages influenced her work. She said:

When you start being bilingual or trilingual it's inevitable that languages are going to seep in like paint that you are applying on silk fabric from different places. There's going to be some kind of bordering and connection there - no doubt, especially that many words exist similarly in different languages. I cannot tell you to what extent I'm influenced but I am deeply, deeply influenced.

Hedy Habra inspires readers with her beautiful expressions of memory, vivid linguistic imagery, and wide-ranging intellect that shines through each poetic phrase. Her memories are uniquely hers but also reflective of known places and events and ubiquitous to humankind.  The Taste of the Earth is a joy to read.

Find The Taste of the Earth at Press53