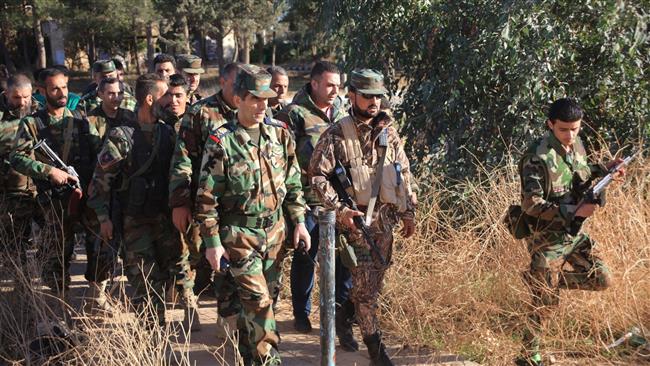 Syrian forces walk at the Kweyris military air base, in the northern Syrian province of Aleppo, on November 11, 2015. (AFP photo)

THE LEVANT NEWS — The Syrian army has struck heavy blows to the Takfiri “JIHADI” militants in the central province of Homs, leaving a group of them dead and injured.

The clashes left at least 13 terrorists dead and injured and destroyed one of the militants’ vehicles along with all weapons and ammunition inside it, according to the sources.

The Syrian forces have been engaged in fierce battles with ISIS terrorists near al-Qaryatayn since they took the town of Mahin and the villages of al-Hadath and Hawarin and their surrounding areas from the Takfiri militants late last month.

Meanwhile, the Syrian army targeted the terrorists in the villages of Hawsh Haju and Si’in al Aswad, 20 kilometers north of Homs City.

The operations left a number of terrorists dead and destroyed the militants’ command posts along with all the weapons and ammunition inside them.

Al-Qaeda-affiliated groups such as Ahrar al-Sham, Islamic Front and Homs Legion are reportedly stationed in the northern countryside of Homs.

Last month, militants began evacuating al-Wair, the last district under their control in Homs, under a ceasefire deal reached with the government.

Syrian forces have recently been making rapid advances against terrorists, who are committing heinous crimes against all ethnic and religious groups in several parts of the Arab country.

The advances of the Syrian government forces against ISIS and other terrorist groups have been expedited by the air cover provided by Russia, which began on September 30 at the request of the Damascus government.