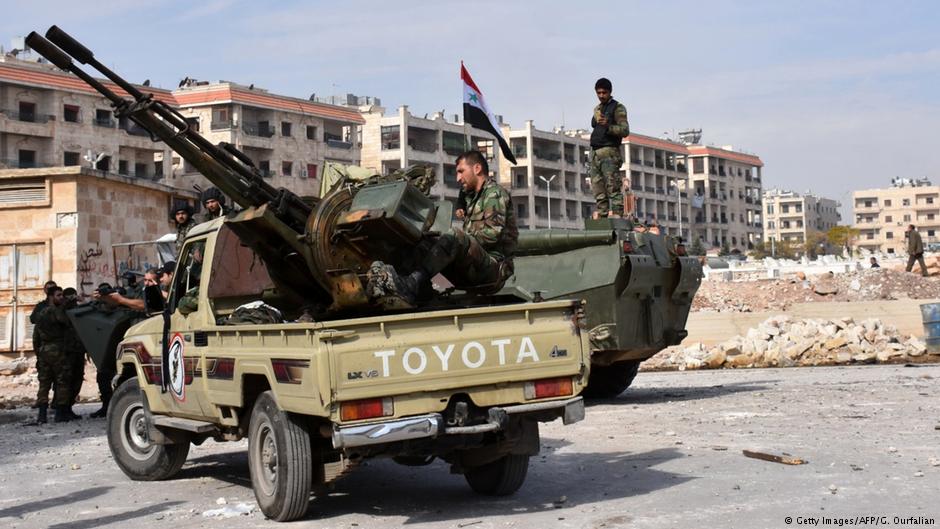 Syrian regime on the verge of recovering 53,000 square kilometers of national territory

When the agreement to ease the escalation was reached on May 6, 2017, the Syrian regular forces controlled an area of ​​about 36,000 square kilometers – 19.3 percent of the Syrian territory. It was the third most influential force in Syria after the Syrian Democratic Forces which in turn was ranked second, controlling 22.1 percent (approximately 41,000 Km square).

As for the other fighting factions, the Islamic Liberation Front, the Turkistan Islamic Party of Turkestan and factions of jihadist fighters that controlled large areas of Syrian territory, the have all witnessed a downgrading of their control in many areas. Formerly they controlled an area of ​​more than 35,500 square meters.

Among the total population and area of ​​control of the factions, the factions of the Euphrates and Turkish forces control the north-eastern Aleppo countryside, with an area of ​​more than 2,250 square kilometres (1.2 percent), while American and Western-supported factions in the Syrian desert control the Al-Tanf crossing – Khirbet al-Shehmi to the north of the experience of Al-Zoghaf, where there is a camp for these factions, an area of ​​about 3540 square kilometers (1.9 percent).

The factions have become increasingly weak with the third influential force in Syria after the regular forces and the Syrian Democratic Forces. The Khalid bin al-Walid army, which controls about 250 square kilometers, i.e. 0.1 percent of Syria. It is located in the Yarmouk Basin in the western suburb of Daraa, adjacent to the occupied Syrian Golan.

Russia worked in a large way to achieve a change in the areas of control, by resorting to a consecutive truce in different areas of Syria, giving the regular forces the power to start a long and protracted battle, against two main parties – the first is the Islamic State (Daash), and the second is the Syrian Badia factions.

Through negotiations with representatives of the opposition and the factions operating in the designated areas of the truce, Russia managed to reach agreements, most notably the Syrian-Syrian agreement, which includes Quneitra, Deraa and Sweida, with an American-Russian-Jordanian agreement, And the southern provinces of Syria, and the Eastern Gauta Agreement between the Russians and the "Army of Islam", and after them the “Corps of the Rahman”. The latter did not succeed, and the Northern Rifle Agreement for Homs broke down after being implemented by an Egyptian-Russian accord.

These agreements reached on the ground for the entry of regular forces into a continuous military operation to the present day, enabled it to achieve great progress on Syrian territory, with the return of scores of villages, towns and cities from the hands of the IS, changing the ratio of control between the regular forces and IS, among other factions.

The regular forces were able to recover an area of ​​1.5 times the size of the area they controlled prior to the first meeting of Astana, which was accompanied by the imposition of an agreement to "ease the tension," after the end of the existence of IS in the province of Aleppo in full form. Additionally, they put an end to the presence of the organization in the province of Damascus, in the countryside surrounding the capital, and recovered large areas of the rural south-eastern Damascus and the north-eastern Sweida. They were also was able to reduce the control of IS in the rural areas of Homs and Hama. The regular forces were able to lift the siege of the city of Deir al-Zour and took control of vast areas of West Badiah and the surrounding area and the vast areas of rural Al-Rigga east, south and south-west.