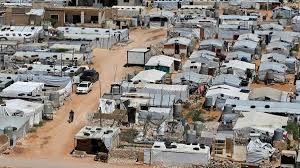 A camp of the Syrian refugee in Lebanon

The economic crisis in Lebanon is prompting a remarkable number of Syrian workers residing in the country to return to Syria.

The number of Syrian refugees in Lebanon has decreased to 851,717, according to the UN High Commission for Refugees’ latest census, though the Lebanese government stopped allowing the UNHCR to register Syrians as refugees in 2015.

The crisis has also led to confrontations between Lebanese and Syrian refugees, with the financial collapse exacerbated by the country’s political paralysis. Prime Minister-designate Najib Mikati has so far failed to overcome a series of long-running obstacles and form a government.

Syrian workers and refugees are paying a heavy price as a result, with the World Bank ranking the situation among the world’s three worst financial crises since the mid-19th century.

Mahmoud, a concierge in one of Beirut’s residential neighborhoods, said that he came from Syria in 2005, settled in Lebanon and had six children.

With his monthly salary and the assistance provided by residents in the building, he explained that he was able to make ends meet, but with the vast rise in prices, he cannot now provide for his family.

Mahmoud is no longer able to stay in Lebanon, so has decided to return to Manbij in northern Syria after his relatives, who were also working in Lebanon, went back and encouraged him to follow.

UNHCR spokeswoman Lisa Abu Khaled told Arab News: “Like all communities in Lebanon, refugees are deeply affected by the compounded crisis and critical situation affecting the country, with … around 90 percent living in extreme poverty and making difficult choices of survival every single day, including skipping meals, not seeking urgent medical treatment, and sending children to work.”

She noted: “Over the last 18 months, the Lebanese currency lost more than 85 percent of its value, with the poorest communities being the hardest hit.”

Abu Khaled added: “As is the case in all communities, the situation of Syrian refugees in Lebanon had been quite difficult long before the economic meltdown. Their situation is made even more impossible today.”

A few years back, numerous Syrians crossed into Lebanon illegally. But refugees now speak about some families silently returning as they can no longer bear the economic pressures they face.

Voice of Syrian Refugees’ Lebanon spokesperson Abu Ahmed Soaiba said the UNHCR had recently received more than 150 requests from Syrian refugees living in rented houses, asking it to allow them to set up tents inside refugee camps in Lebanon.

She told Arab News: “Landlords are demanding refugees to pay rent either in dollars or in Lebanese pounds according to the daily exchange rate on the black market. Where would an unemployed refugee come up with 1.5 million Lebanese pounds ($995) to pay rent for a mere studio apartment?”

Soaiba added: “A Syrian refugee left his tent at midnight on Sunday in the town of Arsal, which includes the largest concentration of refugees in Lebanon, and started screaming hysterically. He wanted to burn the tent with his family in it and then commit suicide, saying that he was no longer able to put food on the table for his wife and children. He was crying out that death is more honorable than helplessness.”

A UN report has warned that half of the Syrian refugee families in Lebanon suffer from food insecurity.

Soaiba said a Syrian woman took her son, who suffers from a severe disability in his back, to Beirut to be examined by a doctor.

“When she returned, she started crying in the middle of the camp, saying that transportation to Beirut and back cost them 700,000 Lebanese pounds, and the doctor told her that there was nothing he could do for her son and referred them to another doctor with a different specialty.”

The aid the refugees receive as part of the response plan to the Syrian refugee crisis funded by international community organizations has lost 69 percent of its value.

It has decreased to around 100,000 Lebanese pounds per person.

A refugee receives $27, but the bank pays it in Lebanese pounds, at the exchange rate of 3,900 pounds to the dollar.

A refugee in Bekaa said: “The owner of the electricity generator raised the subscription fee from 55,000 Lebanese pounds to 220,000 Lebanese pounds for one ampere. If I pay this fee I will no longer be able to afford a bundle of bread. Our life inside the plastic tent has become hell.”

Many Syrian refugees, much like the Lebanese who are affected by the severe economic crisis, resorted to adapting to the situation by reducing health and education expenses.

The phenomena of Syrian child labor and early marriage among females have also increased.

A Syrian refugee is not legally allowed to work in Lebanon, while a Syrian worker has the right to work specific jobs in the construction, agriculture and cleaning services sectors.

Lebanon is one of the world’s smallest countries hosting one of the largest number of refugees in the world, but the Lebanese authorities refuse to officially recognize them as refugees, calling them displaced people instead, and urging the international community to facilitate their return to Syria.

Several revealed that many of them have been subjected to exploitation and racist treatment.

Soaiba said: “Syrian refugees rely on motorcycles for transportation, which is less expensive than using cabs. Nowadays, they are insulted at gas stations, where they are either refused service or forced to pay more than the specified price.”

On Saturday, a dispute occurred in the town of Kawkaba in western Bekaa between young men from the town and Syrians.

The dispute turned into a fight with weapons, which led to the serious injury of two Lebanese youths.

The situation in the town, which has been inhabited by nearly 900 Syrian refugees for years, has remained tense, necessitating the intervention of army intelligence and security services, which surrounded the town until the early hours of the morning to prevent any further escalation.

The townspeople in Kawkaba unanimously asked the Syrian families to leave the town within hours.

Most of the refugees, the majority of whom work in agriculture and the construction sector, vacated their homes and moved their belongings outside the town.

Tension is not limited to conflicts between Lebanese and Syrians but has become prevalent among many Lebanese themselves.

On Sunday, disputes renewed between the people of Maghdoucheh, east of Sidon, and the people of the neighboring town of Aanqoun, against the background of access to fuel from a station in Maghdoucheh.

These tensions almost turned into sectarian clashes between the two towns, as a group of Shiite youths stormed the Christian town of Maghdoucheh, leading to retaliation, with several people injured. Calm was restored after political and religious figures met on Sunday night.