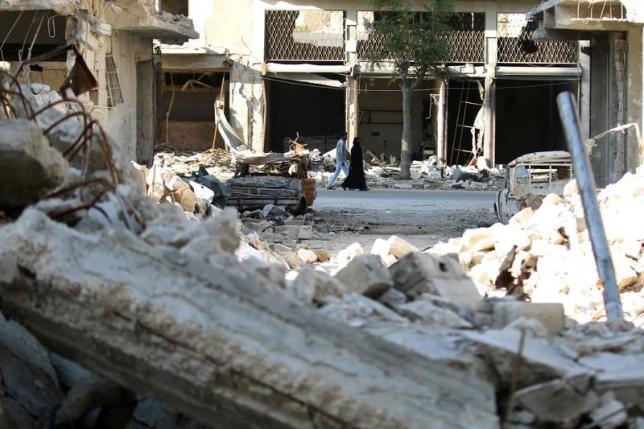 Syrian rebels battle each other north of Aleppo

By Tom Perry for REUTERS| BEIRUT – Syrian insurgents clashed in a town near the Turkish border on Monday as inter-rebel tensions spilled over, playing to President Bashar al-Assad’s advantage with the government tightening its grip on rebel-held eastern Aleppo.

The confrontation in Azaz pitted a prominent Free Syrian Army (FSA) rebel group, the Levant Front, against factions that also fight under the FSA banner and the Islamist Ahrar al-Sham, sources on both sides and a group that reports on the war said.

The Syrian Observatory for Human Rights said headquarters and checkpoints held by the Levant Front had been seized in the fighting, which a Levant Front official said had forced the group to withdraw some fighters from a battle with Islamic State in the nearby city of al-Bab.

The fighting in Azaz, some 60 km (35 miles) north of Aleppo, also prompted Turkey, which backs a number of FSA rebel groups, to close the border crossing at Oncupinar. Adjacent to Bab al-Salam in Syria, it is a major conduit for traffic between opposition-held northern Syria and Turkey.

Rebel officials described the fighting as a blow to the opposition in the Aleppo region. Many of the insurgent groups operating in the Azaz area also have a presence in eastern Aleppo, where rebel groups had also clashed on Nov 2.

The Syrian army backed by Russian air strikes and Shi’ite militias including Lebanon’s Hezbollah have been waging a fierce campaign against the insurgents in the city, before the war the country’s most populous.

Rebel infighting has been a major weakness of the anti-Assad revolt since its earliest days. Rebel factions have been divided by both ideology and local power struggles.

Jihadist groups have crushed less well-armed nationalist factions, while Islamists have also fought each other, notably in the Eastern Ghouta of Damascus this year.

The Levant Front official described it as an attack on his group by rivals including the Nour al-Din al-Zinki faction,

which also fights under the FSA banner but has coordinated closely with Islamist groups. He called the confrontation a potentially lethal blow to the rebellion.

A source on the other side of the conflict said groups including Ahrar al-Sham and the Zinki group had launched a campaign to “cleanse” northern Syria of groups that were guilty of acting like gangs. A statement declaring the start of the campaign identified targets including the leader of the Levant Front and the head of its security office.

Earlier this month, rebel factions clashed in eastern Aleppo itself. In that clash, the Zinki group and the allied jihadist Jabhat Fateh al-Sham tried to crush the Fastaqim faction, which is part of the FSA.

Fateh al-Sham changed its name from the Nusra Front in July and said it was breaking its formal allegiance to al Qaeda. Officials from Ahrar al-Sham did not immediately respond to requests for comment.

The Syrian army and its allies have completely encircled eastern Aleppo this year, and in September launched a major campaign aimed at seizing the insurgent-held areas.

Rebels launched a counter attack last month, aimed at the city’s government-held western districts. But that has failed, with the army and its allies on Saturday recapturing the last piece of territory they had lost.