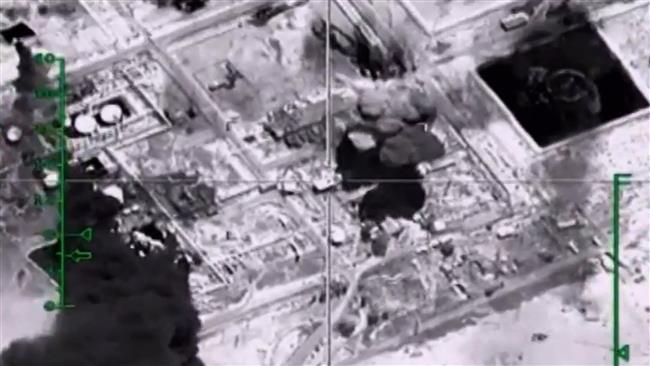 A video grab made on November 23, 2015, shows an explosion after Russian airstrikes on an oil-processing facility controlled by Daesh in the Syrian province of Dayr al-Zawr. ©AFP

THE LEVANT NEWS — The Syrian Air Force has targeted a convoy of 20 tankers smuggling oil from territories held by ISIS group in the Arab country’s east.

Syrian warplanes bombarded the tankers on the al-Mayadin Highway near the eastern city of Dayr al-Zawr on Sunday.

In another development, a top commander of al-Qaeda-linked “Ahrar al-Sham” group, called Abu Talib, was killed in a booby trap explosion in Syria’s northwestern Idlib Province.

Meanwhile, Lebanon’s al-Ahed news website reported that a number of civilians sustained injuries after terrorist groups launched mortar attacks on the northern part of the Syrian province of Hama.

Syria has been gripped by foreign-backed militancy since March 2011. More than 260,000 have reportedly lost their lives and millions displaced as a result of the violence.

Syrian forces have been battling militants, particularly ISIS militants, on different fronts throughout the country. They have recently been making rapid advances against terrorists in operations backed by the Russian air cover, which began on September 30 last year at the request of the Damascus government.

On Sunday, some 30 militants belonging to the al-Qaeda-linked, al-Nusra Front, were killed by Russian airstrikes in the southern part of Idlib.