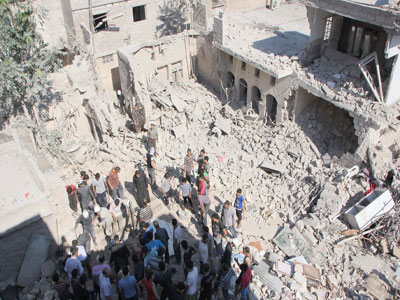 The advance extended their control of parts of a road running toward the group's stronghold of Raqqa, and built on gains made in assaults that intensified sharply earlier this month.

Damascus's offensive, drawing heavily on Russian air cover and ground support from Lebanese Hezbollah and Iranian fighters, has brought the Syrian army to within 25 km (15 miles) of Turkey's border.

The British-based Syrian Observatory for Human Rights said Syria's army and allied fighters recaptured 18 villages east of Aleppo, bringing under their control some 40 km (25 miles) of a highway that leads from the city to Raqqa.

The Syrian army in November fought its way to the Kweires military air base that had been besieged by ISIS in eastern Aleppo province. Saturday's advances took place to the west of the base.

Russia intervened in Syria's nearly five-year-old civil war in September with an air campaign to bolster Assad. Its air strikes have hit ISIS targets but mostly other insurgents, including Western- and Turkish-backed fighters.

U.S.-led airstrikes are also hitting ISIS in areas it controls in Raqqa, Deir al-Zor and Hassakeh provinces in the north and east of the country.