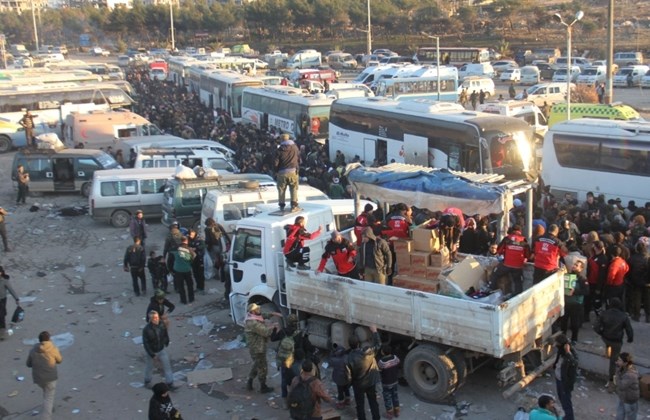 ALEPPO, Syria: Syria's army on Tuesday urged the last remaining rebels and civilians to leave the bombed-out eastern quarters of Aleppo as it prepares to take full control of the devastated city.

The evacuation of east Aleppo is seen as a pivotal moment in the nearly six-year war that has killed more than 310,000 people and triggered a major humanitarian and refugee crisis.

At least 25,000 people have left rebel districts of east Aleppo since evacuations began last week, according to the International Committee of the Red Cross, which is overseeing the operation.

Thousands more were still waiting to be bused out, spokeswoman Ingy Sedky said.

She said that 750 people had been evacuated in parallel from Fuaa and Kafraya, two Shiite-majority villages in northwest Syria besieged by rebels, as part of the deal.

In east Aleppo on Tuesday, soldiers using megaphones called on the remaining fighters and civilians to exit the opposition districts, a military source told AFP.

"The army is expected to enter (Aleppo) to clean the area after the fighters leave," the source said.

Buses and ambulances have been bringing rebels and civilians on a tense journey from Aleppo's battered east into government-held neighbourhoods, and back into rebel-held territory west of the city.

Thousands of people -- mostly women and children -- squeeze onto buses with whatever belongings they can carry, many in tears and others shivering in the cold, according to AFP correspondents who made the trip.

"Everyone was so cold," Bashar Babbour, who works with the medical charity UOSSM, told AFP from the staging ground of Khan al-Assal.

He said he saw a shivering old man struggling to get off one of the buses.

"When people are going to the medical assessment teams. Most of them ask for food and water, in addition to blankets, especially if they're arriving at night," Babbour said.

He said many other evacuees were also asking if there was internet access there so they could contact friends or relatives.

The World Health Organization said the evacuees included around 300 needing medical treatment, including dozens of children.

"The huge majority of these patients have trauma injuries," spokesman Tarik Jasarevic said, adding that 93 people in critical condition had been referred to hospitals in Turkey.

Aleppo was once Syria's commercial and industrial hub, but it has been divided since 2012 between government forces in the west and rebel control in the east.

Government forces launched an offensive in mid-November to capture the whole city, and had seized more than 90 percent of the eastern half when the evacuation deal was struck.

The UN Security Council on Monday unanimously adopted a French-drafted resolution with the backing of Russia to monitor the evacuations from Aleppo.

"The main purpose is how to rescue these terrorist foreigners, intelligence officers," Jaafari told reporters. "This is why you saw this hysterical move in the council in the last few days."

But Jaafari said his government will abide by the resolution and denied that it had blocked access in the past to UN officials.

Diplomatic efforts -- including several rounds of peace talks in Geneva -- have failed to make progress in resolving the conflict, which reached a turning point last year when Russia launched an air war in support of Assad.

The foreign and defence ministers from Russia, Turkey and Iran were meeting in Moscow on Tuesday for key talks on the Syrian conflict.

Russian Foreign Minister Sergei Lavrov said there should be no "concessions to terrorists" at talks with his Turkish counterpart on Syria, a day after Moscow's ambassador was murdered in Ankara.

He said he hoped the three-way talks "will allow us to reach agreements, which will through concrete actions advance the settlement in Syria".

Russia and Iran are on the opposite side of the Syrian conflict from Turkey, which supports the rebels.

But Ankara and Moscow have recently worked closely together to evacuate rebels and civilians from Aleppo.