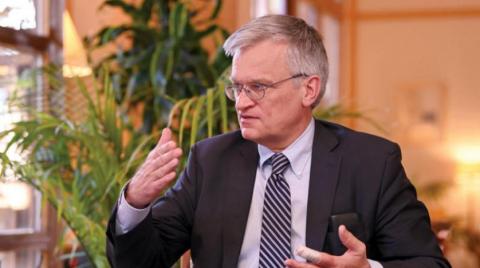 Sweden in talks with GCC over Yemen

Abdul Aziz Hamad Aluwaisheg, the assistant secretary general for political affairs and negotiations at the Gulf Cooperation Council (GCC), has met with Sweden’s envoy to Yemen Peter Semneby in the Saudi capital, Riyadh on Monday.

During the meeting, they discussed the latest developments in Yemen, and reviewed the GCC’s efforts to support a political solution to the crisis, according to the three references represented by the Gulf Initiative and its implementation mechanism, the outcomes of the comprehensive national dialogue, and UN Security Council Resolution 2216.

They also discussed the peace initiative that was announced by Saudi Arabia in March to end the war in Yemen, implement a comprehensive cease-fire, and begin consultations between the Yemeni parties to reach a political solution to the Yemeni crisis under the auspices of the UN.

Semneby briefed the GCC official on Sweden’s political and humanitarian efforts in following up with the Yemeni issue, and said he praised cooperation with the bloc in this regard.