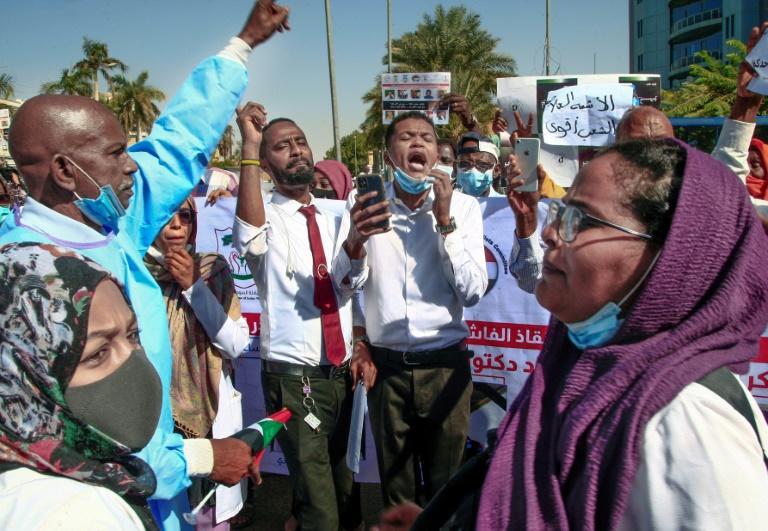 Sudan doctors protest clamp down on their profession by coup plotters

“During every protest they fire tear gas inside the hospital where I work,” one doctor, Houda Ahmad, said at the rally in Khartoum.

“They even attack us inside the intensive care unit,” she added at the rally, where medical personnel carried pictures of colleagues they said had been killed.

The demonstration was the latest in the crisis-hit north-east African country, where protesters in the north also blockaded roads to vent their anger against an electricity price hike announced last week, and that has since been frozen.

The military power grab has sparked an international outcry and triggered a new wave of street demonstrations, with another rally expected on Monday.

During the turmoil of recent months, prime minister Abdulla Hamdok was detained and later reinstated but then quit, warning that Sudan was at a dangerous crossroads threatening its very “survival.”

Deadly crackdowns have claimed the lives of 64 protesters, according to pro-democracy medics. A police general has also been killed in the street violence that has rocked Sudan, one of the world’s poorest countries.

The UN World Health Organization said last week there had been 11 confirmed attacks on Sudanese health facilities since November.

The WHO said it was “also aware of the interception of ambulances, medical personnel and patients during their attempts to seek safety.”

It called for the attacks to “stop now,” pointing out that they threaten health care services needed more than ever during the Covid pandemic.

Covid-19 is a “grave threat” for Sudan, where 94 percent of the population has not been vaccinated, said the WHO.
Sudan has confirmed 93,973 coronavirus infections and about 4,000 deaths. In September, it said 64 percent of about 1,000 health workers tested had been found to be Covid-positive.

Sudan’s 45 million people have also been dealing with a severe economic crisis and inflation approaching 400 percent.
On Sunday, hundreds blocked key roads in the Northern Province, 350 kilometers (229 miles) from the capital, angered by recent news electricity prices would double — a move that was then frozen, but not officially abolished.

“No vehicle will pass until the authorities have canceled this increase, because it signs the death certificate of our agriculture,” protester Hassan Idriss told AFP by phone.

The protests that led to the 2019 ouster of Bashir had started after the government decided to triple the price of bread.
During the recent protests, Sudan has also often shut down the Internet and moved to limit reporting on the unrest.
In the latest move it revoked the license of Al Jazeera Mubasher, the live TV unit of the Qatar-based network, accusing it of “unprofessional” coverage of protests, the channel said.

The United Nations is now seeking to organize talks involving political, military and social actors to resolve the crisis.
UN special representative Volker Perthes announced the bid last week saying it was “time to end the violence and enter into a comprehensive consultative process.”

The mainstream faction of the Forces for Freedom and Change, the leading civilian pro-democracy group, said Sunday it would accept the offer of dialogue if it were to revive the transition to civilian rule.

Sudan’s military in April 2019 put an end Bashir’s three-decade rule, leading to the arrest and imprisonment of the autocrat and many regime officials.

Bashir is also wanted by the International Criminal Court (ICC) on charges of genocide, war crimes and crimes against humanity in Darfur.

An imprisoned former foreign minister under Bashir, Ibrahim Ghandour, has begun a hunger strike along with several ex-regime officials, his family said Sunday.

They will only end it “once they have been freed or brought before an impartial tribunal,” his family said in a statement.
The public prosecutor’s office had recently ordered the release of several ex-officials, but Burhan instead ordered they stay in detention.

The protester movement however accuses Burhan, who was Bashir’s ground forces commander, of helping old regime figures come back to power.