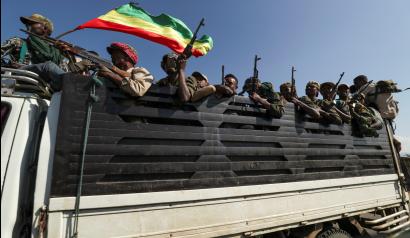 Sudan claims its defeated Ethiopian forces on its borders

The Levant 3 weeks ago News, World Leave a comment

Sudan’s military said Sunday it had “repelled the incursion of Ethiopian forces” in the disputed border area of Al-Fashaqa, near the conflict-ridden region of Tigray.

“Military forces have repelled the incursion of Ethiopian forces in the district of Om Barakeet, forcing them to retreat,” said Brig. Al-Taher Abu Haga, the army’s media adviser, in a statement.

Om Barakeet lies in the contested Al-Fashaqa area, where Ethiopian farmers cultivate fertile land claimed by Sudan, next to the Tigray region of Ethiopia.ad

The bloody conflict killed thousands of people and pushed more than 400,000 into famine, according to United Nations. Tens of thousands of Tigrayans have also fled into Sudan.s

The border dispute feeds into wider tensions in the region, including over Ethiopia’s controversial Blue Nile dam.

Sudan, along with Egypt, has been locked in a bitter dispute over Ethiopia’s mega-dam for a decade. Both downstream countries, dependent on the river for most of their water, see the Grand Ethiopian Renaissance Dam as an existential threat.

Separately in Sudan, the general who heads the country’s ruling transitional authority on Sunday pledged to reform the army, days after a failed coup.

“We are going to reorganize the armed forces … Partisan activities are banned in the army,” Sovereign Council chief General Abdel Fattah Al-Burhan said at the opening of a military hospital in Khartoum.ad

“The armed forces are committed to holding elections on the date fixed for ending the transition” in 2023, he said.

“After that, the army will leave the political scene and its role will be limited to protecting the country.”

Sudan is led by a civilian-military administration under an August 2019 power-sharing deal signed after President Omar Bashir’s ouster by the military in April that year following mass protests against his iron-fisted rule.

Sudan’s government said it thwarted a Sept. 21 coup attempt involving military officers and civilians linked to the regime of imprisoned Bashir. At least 11 officers were among those arrested.

Prime Minister Abdalla Hamdok has since called for reforms within the army, a highly sensitive issue in Sudan.

A transition to full civilian rule has remained shaky, reeling from deep fragmentation among political factions, economic woes and a receding role for civilian leaders.

Paramilitary leader and Burhan’s deputy in the Sovereign Council, Mohamed Hamdan Daglo, has pointed a finger of blame at politicians after the failed coup.ad

“Politicians are the main cause behind coups because they have neglected the average citizen … and are more concerned fighting over how they can stay in power,” Daglo said.