Stormy Daniels arrested at Ohio strip club. Her attorney calls it a setup.

Daniels, who gained notoriety after suing President Donald Trump following an alleged affair, faces three misdemeanor counts of illegally touching a patron and will be arraigned Friday morning, court records show. She posted a $6,054 bail and was released Thursday morning.
Daniels will plead not guilty to the three misdemeanor charges, her attorney, Michael Avenatti, tweeted.
‘It reeks of desperation,’ Avenatti says
Avenatti said his client was taken into custody while performing at a strip club in Columbus.
“She was arrested for allegedly allowing a customer to touch her while on stage in a nonsexual manner! Are you kidding me?” Avenatti tweeted.
“They are devoting law enforcement resources to sting operations for this? There has to be higher priorities.” 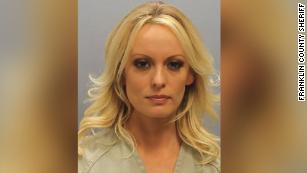 Stormy Daniels will be arraigned on misdemeanor charges Friday.
Under Ohio law, an employee who regularly appears nude or seminude is prohibited from touching patrons on the premises of a sexually oriented business — unless it’s a family member.
Avenatti said Daniels, whose legal name is Stephanie Clifford, was arrested while “performing the same act she has performed across the nation at nearly a hundred strip clubs.”
“This was a setup & politically motivated. It reeks of desperation,” his tweet said. “We will fight all bogus charges.”

Documents accuse her of fondling patrons

But in a probable cause affidavit obtained by CNN affiliate WSYX, detectives who were at the Sirens Gentlemen’s Club said they observed Daniels remove her top and force patrons’ faces into her chest.
“The officers also observed Ms. Clifford fondling the breasts of female patrons,” Franklin County Municipal Court records show. 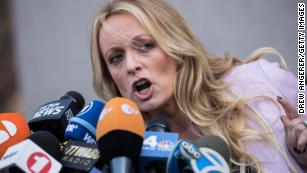 Lawyer: Feds canceled Stormy Daniels interview 00:32
When officers witnessed those activities, three detectives approached the stage. Daniels allegedly made her way toward two detectives, leaned over and grabbed their faces. She shoved each of their faces between her breasts, court documents said.
She fondled a third officer’s buttocks and breasts, according to the documents. Daniels was one of three people arrested at the club, but it’s unclear who the other two were.
CNN has reached out to the Columbus Police Department for more details.
The Sirens Gentlemen’s Club had posted on its website that Daniels was scheduled to perform there Wednesday and Thursday. A person who answered the phone at the club declined to comment. Avenatti tweeted that his client would not perform at the club Thursday night.

Official Statement From @StormyDaniels: As a result of what happened last night, I will unfortunately be unable to go forward with tonight’s scheduled performance. I deeply apologize to my fans in Columbus.

Daniels made headlines worldwide over revelations of an alleged affair with Trump in 2006 — and for the $130,000 she said she received from his attorney in 2016 in exchange for her silence. The White House has said Trump denies an affair happened.
She is suing Trump and his former personal lawyer, Michael Cohen, to be released from a nondisclosure agreement that she says she signed days before the 2016 presidential election to prevent her from publicly discussing the alleged affair.
Avenatti alleges the payment was a violation of campaign finance law and was designed to suppress speech. Trump has said he personally reimbursed Cohen for that payment.

Previous Higher oil prices and output to boost public spending and GDP growth of GCC
Next Israel to Russia: Assad’s safe from us, but Iran must quit Syria