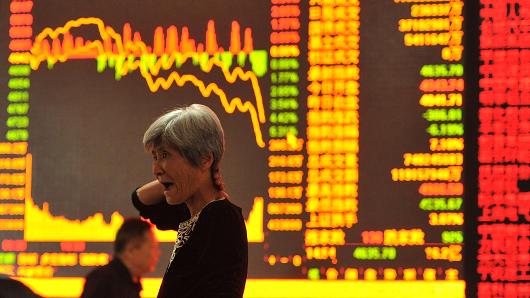 US stocks fell and bonds surged as President Donald Trump moved the US closer to a trade war with China, while investors weighed diverging monetary policies from the Federal Reserve and European Central Bank.

The S&P 500 Index dropped to session lows, erasing its gains for the week, after the US announced a list of $50 billion of Chinese goods targeted for tariffs and China said it would have to respond. Trade-sensitive sectors including tech hardware led the decline. The Stoxx Europe 600 Index also headed lower.
The MSCI All Country World index, which tracks shares in 47 countries, was down 0.3 per cent in morning trade in Europe and set for a weekly loss. The Asia Pacific MSCI index ex-Japan edged down 0.3 per cent and was set for a weekly loss of more than 1 per cent. Many markets in Asia were closed on Friday for holidays celebrating the end of Ramadan.
“It doesn’t look like investors really believe we’re going into a full-blown trade war, but we’re going into a full-blown trade skirmish,” said Kim Forrest, senior portfolio manager at Fort Pitt Capital Group LLC in Pittsburgh. “Because we’re going to put some tariffs on China, China’s putting tariffs on us, and this is the market saying we’re not super happy about this turn of events.”

Treasury yields dipped and Italian debt led a rally in European bonds, which was triggered a day earlier by the ECB ruling out a rise in interest rates until the second half of 2019. The euro gained after Thursday’s slump and the dollar was steady.
US trading volume soared Friday, and markets may be subject to unexpected swings, because of a quarterly event known as quadruple-witching, when futures and options contracts on indexes and individual stocks expire.
The US pledged to pursue more tariffs if China retaliates, with reports suggesting America is already preparing a second list of targeted goods worth as much as $100 billion. In response, China said it doesn’t want a trade war but would have to counter. Stocks in the country fell earlier, and the Shanghai Composite gauge closed at its lowest level since September 2016.
Emerging markets remain under pressure as worries about an overhaul of Argentina’s central-bank leadership roil the peso. South Korea’s won and Thailand’s baht led declines Friday. Meanwhile, Russia’s rouble pared a decline after the central bank extended a pause in monetary easing and said its shift to looser policy needs to be slower.
The single currency was headed for its worst weekly loss in 19 months after the ECB on Thursday signalled interest rates would be left at record lows into at least mid-2019. The currency had shed 1.9 per cent to the dollar, its biggest daily decline since Britain voted to quit the EU in 2016.
The overall weakness in the euro gave a lift to the dollar, which hit its highest against a basket of currencies since November 2017.
West Texas crude slipped as a halt in loading from two key ports in Libya offset concerns about a phase-out of supply limits by Opec and allied producers. Opec members were set meet next week, and a clash over raising production is brewing.