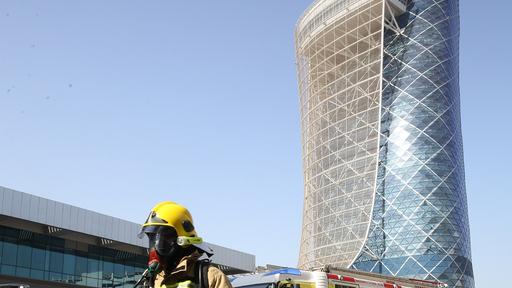 It was from the Bedouin camp in the desert that the ‘Flame of Hope’ had started its journey. And after travelling through the Emirate’s landmark sites and enlightening hearts in its way, it finally took centre stage at the Abu Dhabi National Exhibition Centre (ADNEC) on Saturday.

In a glittering ceremony, amid the cheer of an enthusiastic crowd, the cauldron was lit that heralded the beginning of the Special Olympics IX MENA Games Abu Dhabi 2018.

Over the next week, the light will be spreading just one message through the medium of sport — a fair opportunity to demonstrate and develop skills and gain respect in the society, at large, for the people of determination.

After the UAE national anthem, the host city video titled ‘Welcome to my City’ was played, before more than 1,000 Special Olympics athletes entered the arena

The Special Olympics will also show that love and compassion can transcend all boundaries of divide, be it race, gender, religion or nationality.

The excitement was palpable at the ADNEC arena well before the start. Athletes from 31 countries, beating all odds, waited patiently for the function to commence.

Many were seen jumping with joy as the photographers and the television media turned their spotlight on them.

The spectacle began with a video countdown that built the excitement ahead of the evening’s entertainment. After the UAE national anthem, the host city video titled ‘Welcome to my City’ was played, before more than 1,000 Special Olympics athletes entered the arena.

Understandably, the UAE contingent of 141 athletes got the loudest cheer as they made their way into arena. The Egyptian contingent, too, stole the show with the team lead in by kids dressed as Pharoah.

The Special Olympics flag then entered ADNEC as symbolic oaths were taken by representatives of both the athletes and coaches.

More than 1,000 athletes will be vying for top honours over the next six days and the success of the event will be huge, as UAE is bracing itself to host the Special Olympics World Games Abu Dhabi 2019.

Divisioning for the MENA Games is already over in the day’s heading to the opening ceremony and the athletes are now ready to compete on an equal playing field.