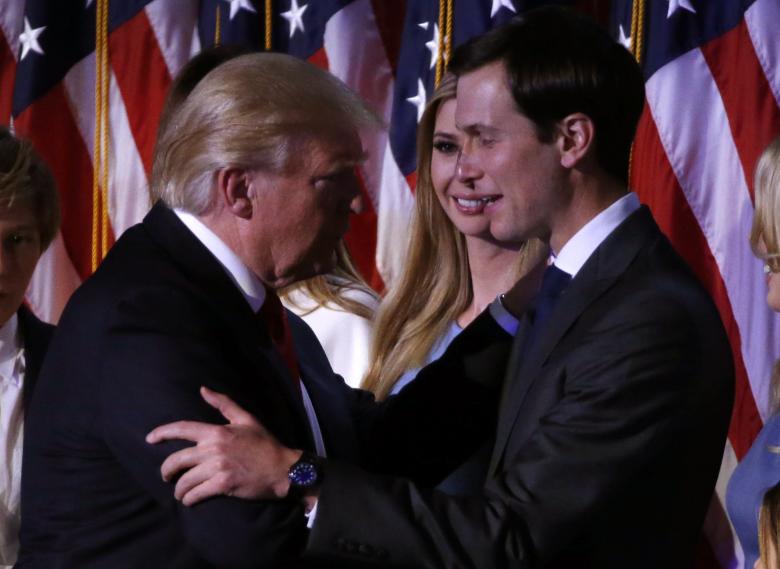 By Will Dunham for Reuters | WASHINGTON – After winning a primary election that effectively clinched the Republican presidential nomination, Donald Trump paused to laud a boyish-looking 35-year-old who ultimately proved to be an indispensable figure on the path to the White House.

“Honestly, Jared is a very successful real estate person. But I actually think he likes politics more than he likes real estate,” Trump said of his son-in-law Jared Kushner, standing to his right during a victory speech after the Indiana party primary election in May. “But he’s very good at politics.”

Kushner, the slender, clean-cut New Jersey real estate scion who married Trump’s daughter Ivanka in 2009, helped guide the Republican Trump to victory last week over Democrat Hillary Clinton and is poised to remain an influential adviser during his presidency.

Kushner emerged as an important voice early in Trump’s campaign, launched in June 2015. He was involved in almost every aspect of Trump’s campaign, offering advice on key personnel decisions, strategy, speeches, fundraising and other areas.

Late in the campaign, he began laying the groundwork for a possible Trump-run television network, in the event his father-in-law lost, according to a person familiar with the matter.

Kushner spearheads his family’s real estate development company, Kushner Companies, and is the publisher of the New York Observer weekly newspaper, which he acquired at age 25.

While a federal anti-nepotism law prohibits a president from hiring family members to serve in his administration, Kushner is set to remain a key insider and trusted confidant.

Kushner is a Harvard graduate with a New York University law degree and a master’s in business administration. Like Trump, Kushner followed in the footsteps of a real estate powerhouse father.

His father, Charles Kushner, is a real estate developer, philanthropist and major Democratic donor whose reputation was left in tatters after a lurid criminal case. He was sentenced to two years in prison after pleading guilty in 2004 to 18 counts of tax evasion, witness tampering and making unlawful campaign donations.

During the case, he admitted to smearing his brother-in-law, who had cooperated with prosecutors, by hiring a prostitute to have sex with him in a motel room, then sending a secretly recorded video of the encounter to the man’s wife, Charles Kushner’s own sister.

In an unusual twist, the man who prosecuted Charles Kushner was Chris Christie, now the governor of New Jersey, who also has served as an adviser to Trump.

Kushner is an Orthodox Jew whose wife, Ivanka, converted to Judaism before they married. The family keeps kosher, observes the Sabbath and attends an upscale synagogue on New York’s Upper East Side.

Steve Bannon, former head of the right-wing Breitbart News website, took a leadership post in the campaign in August after it became clear that Trump, his children and Kushner trusted his advice and analysis, a source said at the time.

Breitbart News is closely associated with the “alt-right” movement, a loose online group of white supremacists, anti-Semites and others opposed to multiculturalism.

Trump, who takes office on Jan. 20, named Bannon as chief strategist and senior counselor on Sunday.

Exclusive: Billionaire green activist Steyer vows to battle Trump, says money not an issue
Trump leans toward loyalists as he mulls Cabinet picks
Dana Schwartz, a Jewish reporter for Kushner’s newspaper, in July criticized Trump for his Twitter post accusing Clinton of corruption using a Star of David image and a background of $100 bills. Schwartz then wrote an open letter to Kushner after being deluged with anti-Semitic tweets.

Schwartz asked Kushner, “how do you allow this? Because, Mr. Kushner, you are allowing this. … When you stand silent and smiling in the background, his Jewish son-in-law, you’re giving his most hateful supporters tacit approval.”

Kushner responded by writing in the Observer, “In my opinion, accusations like ‘racist’ and ‘anti-Semite’ are being thrown around with a carelessness that risks rendering these words meaningless.”

He went on to write that his grandmother and grandfather survived the Nazi Holocaust while other relatives did not.

“I know the difference between actual, dangerous intolerance versus these labels that get tossed around in an effort to score political points,” Kushner wrote.

Kushner became a major player in real estate in his mid-20s, after his father’s conviction. At 26, he orchestrated what was the most-expensive single-building purchase in U.S. history in 2006 with the $1.8 billion acquisition of a 41-story skyscraper at 666 Fifth Avenue in Manhattan.

Kushner told The Real Deal trade magazine afterward, “In New York, you have to act quickly, or else you get left in the dust.”