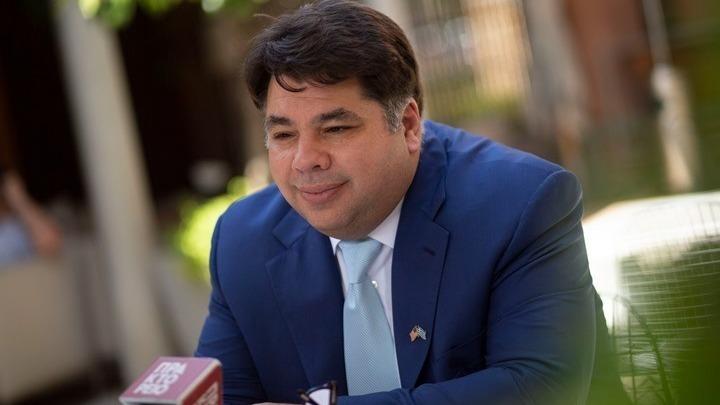 Biden’s ambassadors in Scandinavia and Greece have some questions to answer about their qualifications.

January 16, 2014, was a very bad day for George Tsunis. On that fateful afternoon, the big-time political donor appeared before Congress as President Barack Obama’s nominee for ambassador to Norway. Ambassador confirmation hearings rarely generate headlines, but this one was special.

In a series of gaffes, Tsunis referenced Norway’s “former president” (the government is a parliamentary monarchy run by a prime minister) and claimed that Oslo had been “very quick to denounce” the Progress Party for “spew[ing] its hatred.” The party, then a member of the country’s ruling coalition, would have been surprised to hear that it had denounced itself.

After a drubbing in the American and Norwegian press, Tsunis removed himself from consideration for the job. But the hotelier was not yet ready to give up on every mega-donor’s dream: getting to stick “ambassador” in front of his name for the rest of his life.

Tsunis bided his time until the 2020 election, when he donated a total of $144,000 to a seemingly strategic swathe of candidates and Democratic PACs, according to former career diplomat and ambassador Dennis Jett. These included a direct donation of $2,800 to Biden’s campaign as well as $35,800 to Democratic PAC ActBlue and $35,500 for the Democratic Senatorial Campaign Committee. Among the other recipients of Tsunis’ largesse were Sens. Bob Casey (D-Penn.), Bob Menendez (D-N.J.), Cory Booker (D-N.J.) and Rand Paul (R-Ky.), all of whom hold sway in the Senate committee charged with questioning ambassador nominees.

After President Joe Biden tapped Tsunis as ambassador to Greece, the process went much more smoothly. Paul and Casey both warmly endorsed his nomination during a January hearing, highlighting his business acumen, fluency in Greek, and brief tenure as a congressional aide. Two months later, the Senate signed off on Biden’s pick and sent him to Athens. (In a statement to Responsible Statecraft, a Casey spokesperson said Tsunis was confirmed to the role because of his “extensive leadership experience and his long commitment to the U.S.-Greek relationship.”)

“He’s a horrible choice,” Jett, author of the book “American Ambassadors,” said, arguing that Tsunis’ mistakes in 2014 show he is not qualified to take over an ambassadorship that has been held by experienced diplomats for decades.

And Tsunis is far from Biden’s only questionable pick for ambassador. In total, Responsible Statecraft found 13 appointees who made significant political donations but have little to no international or government experience. These include Biden’s choices for Finland and Sweden, both of which are now engaged in a complex process to join NATO, in addition to Norway, one of three NATO countries that directly borders Russia.

Experts who spoke with Responsible Statecraft say these appointments are risky given that donors are less qualified and more prone to mistakes than career diplomats. They also noted that the seemingly corrupt practice can hurt America’s image abroad and undercut Biden’s avowed commitment to democracy and liberalism.

The White House did not respond to a request for comment on its appointees’ qualifications.

Biden is certainly not the first president to dole out ambassadorships to prominent donors. In fact, that practice was the norm for the first 150 or so years of America’s history. It began to wane in the middle of the 20th century as new ideas about good governance increased the perceived importance of a professional diplomatic corps. Since then, about 70 percent of postings go to career diplomats, while the rest go to donors, political allies, and friends of the president, according to Jett.

Recent presidents have carried on the practice despite sharp critique from foreign service officers, including former ambassador to Afghanistan Ronald Neumann, who heads the American Academy of Diplomacy.

“It’s one of the last vestiges of the spoils system, selling offices for money,” said Neumann. He added that it sometimes complicates the jobs of career diplomats, who can be forced to corral or work around inexperienced ambassadors. It also limits the number of top-level jobs available to career foreign service officers, creating frustrations for those who seek to reach the pinnacle of their profession. (Though he doubts that such nominations will ever end, Neumann says he hopes that presidents will at least become more discerning about who they send to represent the United States.)

Notably, Obama’s pick for ambassador to Luxembourg was so problematic that some staffers requested a transfer to Iraq or Afghanistan in order to get away from her. She stepped down soon after a State Department inspector general report revealed that the embassy was in a “state of dysfunction” because of her “aggressive, bullying, hostile and intimidating” approach.

More embarrassing episodes followed under President Donald Trump, whose ambassador to Iceland demanded armed bodyguards in a country where the prime minister rides a bike to the store. And Trump’s pick for the Netherlands created an uproar when he held a fundraiser for a far-right Dutch party inside the U.S. Embassy in The Hague.

Despite campaign promises to fix America’s international image, Biden has failed to buck the trend when it comes to buying ambassadorships. Doug Hickey, his pick for Finland, gave over $150,000 to Democratic candidates last cycle, most of which went directly to Biden Super PAC Unite The Country. Hickey’s only international experience came in 2014 when he served as Obama’s ambassador to Expo Milano, an international fair highlighting the relationship between tech, culture and food. During his confirmation hearing, Sen. Tim Kaine introduced the businessman and donor as a “longtime friend” and praised his experience in the tech industry. At no point did the appointee mention substantive government or international experience.

Perhaps more importantly, Biden has also followed his predecessor when it comes to oversight. Under Obama, the State Department inspector general issued scathing reports about four particularly problematic political appointees, leading directly to their resignations. But Trump fired the inspector general back in 2020, and Biden has so far failed to nominate a new person for the role. According to Jett, this leaves the department’s most important oversight office hobbled, making it hard to know how Biden’s political appointees are handling their jobs.

The vast majority of political donors request appointments in Europe or the Caribbean. There are two key reasons for this, the first being that rich adventure seekers aren’t too keen on putting themselves in harm’s way. (“They tend to not send them to places where people shoot at you,” said Neumann.)

The second is that the stakes are usually lower for these positions. As Neumann noted, most of these countries are close allies with which the United States has a dense web of relations, meaning that staff can generally work around a problematic ambassador.

But, shortly after Biden made his nominations for Scandinavia and Eastern Europe, those positions started to look a lot less cushy. Washington now has inexperienced political donors at the helm in Greece and Norway, two of the NATO countries closest to Russia. The same is true of Finland and Sweden, which are both engaged in the complex, politically delicate process of joining NATO.

It is, of course, possible that the big-money donors posted in these countries will succeed. Political appointees often come into the job with significant management experience, and not every career diplomat is guaranteed to be a better choice. But it’s hard to imagine that political donors are the safest pick to manage U.S.-Europe relations during the continent’s biggest crisis in decades.

“When you send somebody with no experience to a post that has issues, it’s kind of a dice roll,” said Neumann.