Chaos in the streets of Beirut on August 8. Photo courtesy of Anwar Amro.

Lebanon’s security forces used excessive levels of violence against tens of thousands of protesters who had gathered in downtown Beirut on August 8, 2020, to express their rage and frustration over the government and political elites’ incompetence and corruption.

The ruling elites’ incompetence is widely considered to have led to the August 4 blast at Beirut’s port, which devastated the city. Human Rights Watch, Amnesty International and some Lebanese civil society groups have called for an independent investigation by international experts to determine the causes and responsibility for the explosion and recommend measures to ensure it cannot happen again.

Human Rights Watch observed security forces launching excessive amounts of tear gas to disperse protesters, especially at the entrances to parliament. While a small number of protesters hurled rocks and debris at security forces, the harmful effects of the tear gas reached peaceful protestors in areas in the northwestern part of the Martyr’s square. The clouds of tear gas were so thick that Human Rights Watch researchers were not able to ascertain which security forces were responsible for launching the tear gas. 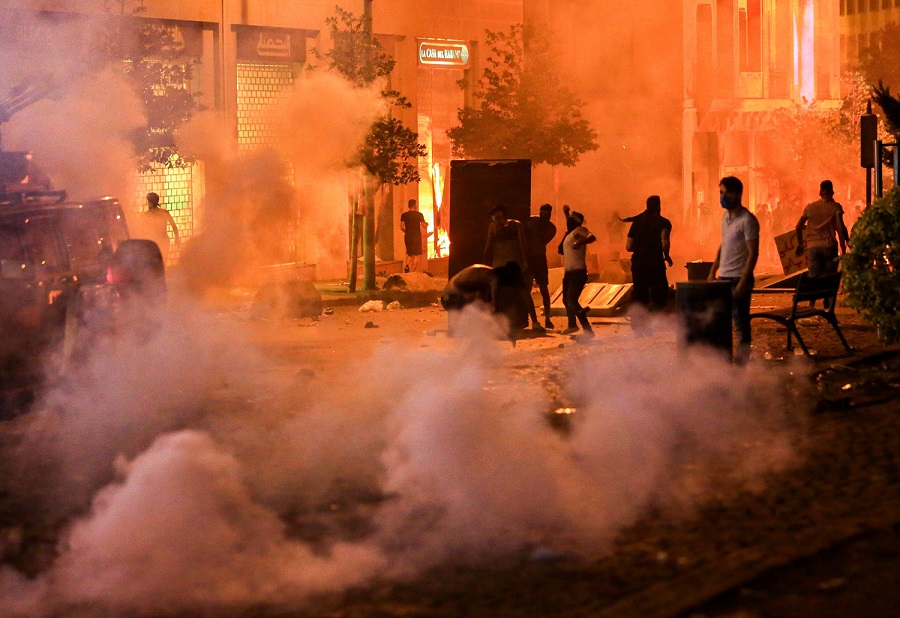 The army also used excessive force when they beat protesters with sticks and their bare hands. They also attacked observers, including a journalist and a Human Rights Watch researcher, around the Ring Road area. The army tried to stop the journalist and researcher from filming their attack on protesters.

Throughout the evening, protesters stormed the Foreign Ministry, Economy Ministry, Environment Ministry, Energy Ministry, and the Association of Banks. Most of these buildings had been severely damaged by the blast.

Injured protesters
Numbers compiled from the Lebanese Red Cross and the Islamic Emergency and Relief Corps show 728 people were injured, 153 of them taken to hospitals for treatment The Internal Security Forces (ISF) announced that one of its members died while trying to save people trapped at the Le Grey hotel. They said 70 ISF personnel had been injured. The Army stated that 105 of its soldiers were injured, including two who were in critical condition.

Human Rights Watch is compiling videos and conducting further analysis to determine which security units are responsible for prohibited conduct and violations of international human rights laws and norms.

If you have some footage please share it with HUMAN RIGHT WATCH or AMNESTY INTERNATIONAL!