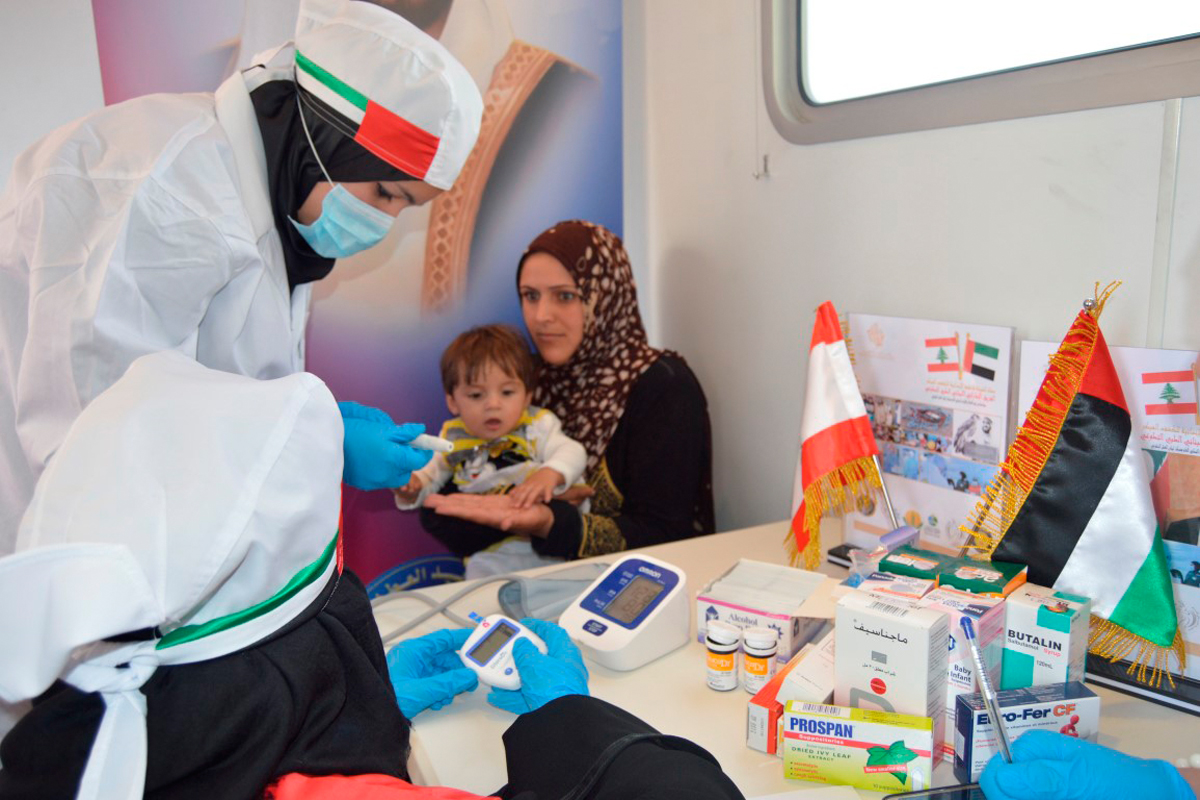 The Sheikha Fatima Global Humanitarian Campaign intensified its missions in Lebanese villages, to offer the best diagnostic, therapeutic and preventive services to children and women, under the theme, 'Following in the Footsteps of Zayed,' and as part of the 'All of Us are our Mother Fatima' programme, and supervised by an Emirati-Lebanese voluntary team.

The campaign is a joint initiative by the 'Zayed Giving Initiative' and the General Women’s Union, GWU, in partnership with the Lebanon Centre for Volunteer Work, the Dar Al Ber Society, Sharjah Charity House, and the Saudi-German Hospitals Group, under the supervision of the UAE Embassy in Beirut and in line with the humanitarian principles of the late Sheikh Zayed bin Sultan Al Nahyan and the Year of Tolerance.

Noura Al Suwaidi, Director of the GWU, stated that the campaign’s humanitarian mission to treat children and women are part of the directives of H.H. Sheikha Fatima bint Mubarak, Chairwoman of the General Women's Union, President of the Supreme Council for Motherhood and Childhood, and Supreme Chairwoman of the Family Development Foundation, and the 'Mother of the UAE,' to limit the spread of chronic diseases around the world, under the supervision of volunteer doctors from the UAE, Egypt, Sudan, Somalia, Syria, Jordan, Pakistan, India, Eretria, Kenya, Bangladesh, Uganda and Lebanon.

She added that the campaign is an innovative model of volunteer work and humanitarian giving, and has reached, through its humanitarian message, over 16,000,000 children and women around the world, regardless of colour, sex or race, which reflects the vision of Sheikha Fatima and her pioneering role in achieving comprehensive advancement and sustainable health development, due to the support the wise leadership for innovative humanitarian initiatives.

Al Suwaidi praised the efforts of Hamad Saeed Sultan Al Shamsi, UAE Ambassador to Lebanon, who enabled volunteer medical staff to ease the suffering of patients, under a voluntary and humanitarian framework and supervised by Emirati-Lebanese volunteer medical teams, which reflects the strong relations between the youth of the two countries and the humanitarian partnership between Emirati and Lebanese institutions.

Dr. Reem Othman, Ambassador of Humanitarian Action, explained that the one-year campaign is part of a joint Emirati-Lebanese humanitarian voluntary programme, which organised 12 medical caravans while praising the efforts of the volunteer doctors, who offered the best diagnostic, therapeutic and preventive services to all age groups and nationalities, through mobile clinics and a field hospital.

Mohamed Al Janoon, President of the Lebanon Centre for Volunteer Work, thanked the UAE, whose giving to others is not strange, for implementing the initiative, which aims to achieve advancement, goodness and development. He also praised the initiatives of Sheikha Fatima, while affirming that they are appreciated by the Lebanese government and people, and explaining that the campaign will serve the Lebanese community in Al Baqaa, which is in dire need.