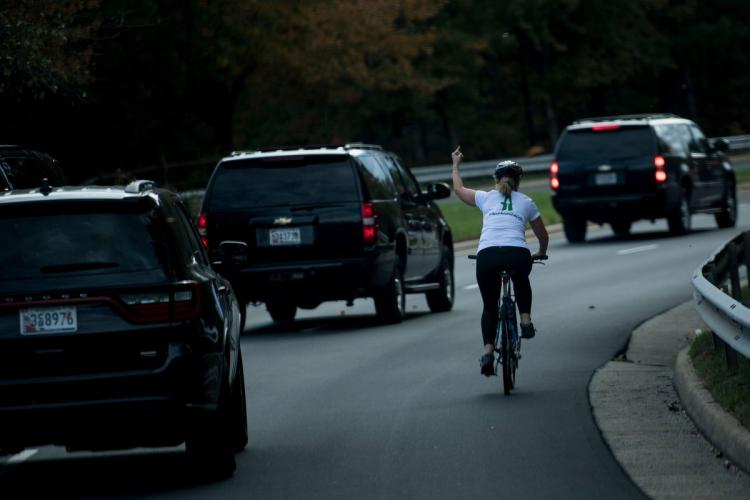 It was the middle-finger salute seen around the world.

Juli Briskman’s protest aimed at the presidential motorcade that roared past her while she was on her cycling path in Northern Virginia late last month became an instantly viral photo.

Turns out it has now cost the 50-year-old marketing executive her job.

On Halloween, after Briskman gave her bosses at Akima, a government contracting firm, a heads-up that she was the unidentified cyclist in the photo, they took her into a room and fired her, she said, escorting her out of the building with a box of her things.

“I wasn’t even at work when I did that,” Briskman said. “But they told me I violated the code-of-conduct policy.”

Her bosses at Akima, who have not returned emails and calls requesting comment, showed her the blue-highlighted Section 4.3 of the firm’s social-media policy when they canned her.

“Covered Social Media Activity that contains discriminatory, obscene malicious or threatening content, is knowingly false, create [sic] a hostile work environment, or similar inappropriate or unlawful conduct will not be tolerated and will be subject to discipline up to an [sic] including termination of employment.”

But Briskman wasn’t wearing anything that connected her to the company when she was on her ride, nor is there anything on her personal social-media accounts — where she wordlessly posted the photo without identifying herself — to link her to the firm.

She identifies herself as an Akima employee on her LinkedIn account but makes no mention of the middle-finger photo there.

Wait. It gets even more obscene.

Because Briskman was in charge of the firm’s social-media presence during her six-month tenure there, she recently flagged something that did link her company to some pretty ugly stuff.

As she was monitoring Facebook this summer, she found a public comment by a senior director at the company in an otherwise civil discussion by one of his employees about the Black Lives Matter movement.

“You’re a f------ Libtard a------,” the director injected, using his profile that clearly and repeatedly identifies himself as an employee of the firm.

In fact, the person he aimed that comment at was so offended by the intrusion into the conversation and the coarse nature of it that he challenged the director on representing Akima that way.

So Briskman flagged the exchange to senior management.

Did the man, a middle-aged executive who had been with the company for seven years, get the old “Section 4.3” boot?

Nope. He cleaned up the comment, spit-shined his public profile and kept on trucking at work.

But the single mother of two teens who made an impulsive gesture while on her bike on her day off?

Her mistake, said Bethesda lawyer Bradley Shear, who specializes in social-media issues, was her honesty.

“You can’t see her face; she is totally unidentified in that picture,” he said. “But once she identified herself to her employer, they had to consider that information.”

The company takes into account how the image of an employee flipping off the president looks and whether it may draw negative attention or threats, said Shear, who has a blog devoted to such matters.

But what about the First Amendment?

Briskman is not a strident activist.

In fact, after years of working all over the world as part of the nation’s diplomatic corps, she’s usually pretty reserved.

“I think I gave money for clean water once,” she said.

During the Women’s March the day after Trump’s inauguration, she couldn’t make it into Washington. Instead, she said, she stood in somber protest outside the CIA headquarters with a “Not My President” sign.

That day on her bike, she wasn’t planning to make a statement.

She was feeling much like many other Americans who are frustrated with Trump’s behavior and the way he has performed as president.

“Here’s what was going through my head that day: ‘Really? You’re golfing again?’ ” Briskman said.

She had been pounding out her daily exercise, a little shorter than usual because she was still recovering from running the Marine Corps Marathon, when the phalanx of black cars passed her.

She’d been chewing on the state of the nation during her ride — imagining the devastation in Puerto Rico, furious that young immigrants brought to the United States as children could be deported, despondent over the deaths and devastation in Las Vegas, concerned about her friends in the diplomatic corps who said their daily job is now being the laughingstock of the world — when the presidential golfing procession interrupted her meditation.

“I was thinking about all this, tooling along, when I see the black cars come and I remember, oh, yeah, he was back on the golf course,” she said.

So she did what millions of Americans do on the road every day.

Hail to the chief, resist-style.

But she couldn’t just ride off. Or watch it whoosh away. The motorcade stopped, bisecting her usual route. She knew it wouldn’t be wise to cut between the cars. And she didn’t want to stay with her routine and look like she was stalking the motorcade when it turned where she usually turned. So she decided to change her route, and punctuated the final insult with another one-fingered salute.

She had no idea the sentiment had been snapped by photographer Brendan Smialowski for Agence France-Presse and Getty Images. And that night, it started popping up all over.

A few of her friends thought they recognized her, tagged her on the photo and asked.

“I said, ‘Yeah, that’s me. Isn’t it funny?’ ” she said. Ha ha. And she posted it as her Facebook cover photo and her Twitter profile picture, so now her 24 Twitter followers could guess that it was her.

The next few days, though, it started getting nasty at the yoga studio, where she is a part-time instructor — something she does mention on Facebook. Some threatening emails came, Briskman said.

“They told the owner of the studio she should fire me,” she said. So Briskman quickly removed mention of the studio and it was all back to ommm at the yoga place and in her life. She wasn’t a celebrity. Only the back of her head and her hand were.

But knowing that connection had been made, Briskman wanted to make her bosses at Akima aware of the situation.

It didn’t take long for her head to roll.

And now, heads are shaking.

Briskman has contacted the American Civil Liberties Union about the case.

Her bosses told her that they do support her First Amendment rights. But they wanted her to “be professional,” she said.

Does Briskman regret that middle finger, that reflexive moment that wasn’t all pussyhats and protest signs, that wasn’t calculated resistance, but rather a totally relatable plain-old, working-woman, living-my-life, what-the-heck-is-going-on-in-our-world reaction?