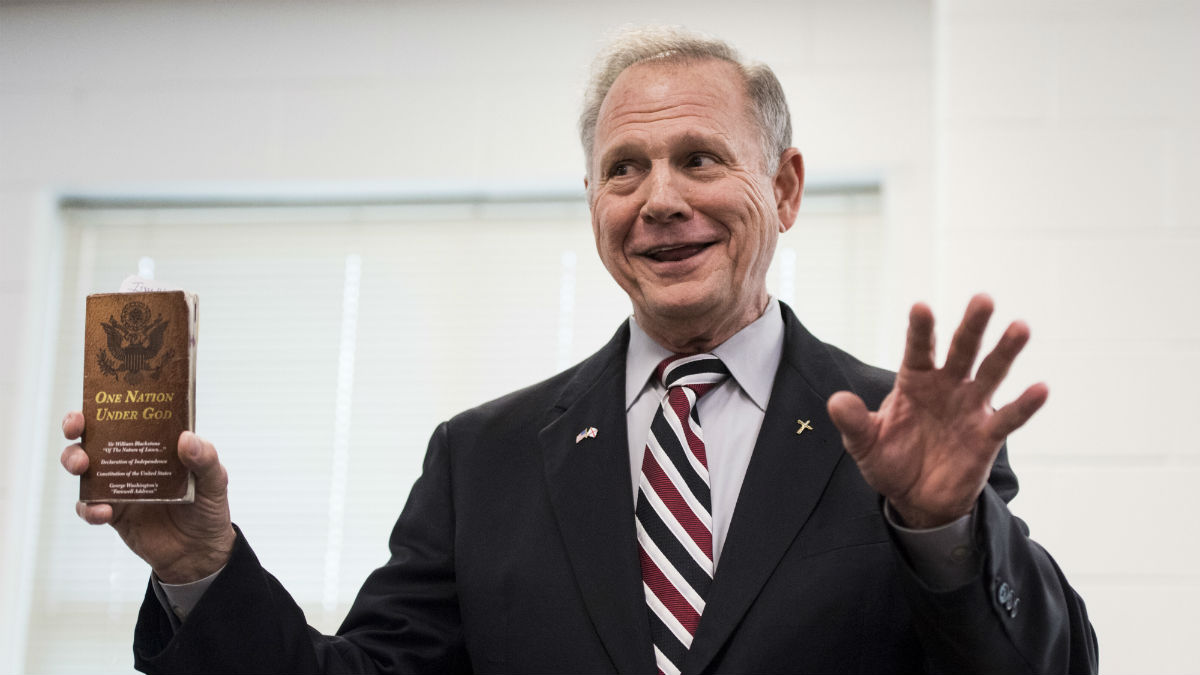 Republicans in Washington seemed near panic Thursday in the light of a news report in which four women said Roy S. Moore, the Republican nominee for a United States Senate seat in Alabama and an evangelical Christian, had made sexual or romantic overtures to them when they were teenagers and he was in his 30s. Senator Mitch McConnell of Kentucky, the Republican majority leader, said Mr. Moore should step aside ahead of the Dec. 12 special election if the allegations were true.

But in Alabama, the fallout was uncertain for a candidate who is considered a hero in some circles for his conservative cultural stances. Mr. Moore, the former chief justice of the Alabama Supreme Court, was twice removed from that office for his positions on gay marriage and a Ten Commandments display. On Thursday, he strenuously denied the allegations the women made about him in on-the-record interviews included in the report, published by The Washington Post.

And it was clear that many in his conservative base were in no mood to desert him in a race for a Senate seat Republicans consider crucial to maintaining their majority in the upper chamber.

John Skipper, 66, a former chair of the Mobile County Republican Party, declared the allegations “total contrived media garbage.” Mr. Skipper said that he would still support the candidate and that he figured most of the Alabama Republicans he knew would probably do the same.

“Most of them will not be shocked,” he said, “and will rather be expecting these shenanigans being pulled by the Democrats as standard operating procedure.”

Whether Mr. Skipper’s prediction proves true remains to be seen. But the report unquestionably introduced new waves of uncertainty and turmoil into a race for the Senate seat vacated by Jeff Sessions, the attorney general.

The women cited in The Washington Post article said that Mr. Moore had pursued them in the 1970s and 1980s when he was a lawyer in his early 30s.

Mr. Moore was defiant, denying the charges and attacking the news media.

“These allegations are completely false and are a desperate political attack by the National Democrat Party and The Washington Post on this campaign,” he said in a statement. He later attributed the news to “The Obama-Clinton Machine’s liberal media lap dogs.”

Brett Doster, an adviser to Mr. Moore, said the candidate would “absolutely not” drop out of the race, calling the charges “a fabricated November surprise.”

Others in Alabama shrugged at the allegations. “There’s nothing to see here,” said Jim Zeigler, the state auditor and a longtime supporter of Mr. Moore. “Single man, early 30s, never been married, dating teenage girls. Never been married and he liked younger girls. According to The Washington Post account he never had sexual intercourse with any of them.”

But Mr. Moore’s candidacy appears to be in grave danger. Senate Republicans moved en masse to distance themselves from their nominee almost as soon as the news article was posted.

A statement from Vice President Mike Pence said: “The Vice President found the allegations in the story disturbing and believes, if true, this would disqualify anyone from serving in office.”

That statement was repeated by numerous Republicans, including the president who was traveling in Asia.

“Like most Americans the president believes we cannot allow a mere allegation, in this case one from many years ago, to destroy a person’s life,” Sarah Sanders, the White House press secretary, said in statement from Danang, Vietnam, where the president is attending an economic summit meeting. “However, the president also believes that if these allegations are true, Judge Moore will do the right thing and step aside.”

“If these allegations are true, his candidacy is not sustainable,” said Senator John Cornyn of Texas, the second-ranking Republican. Mr. Cornyn said he wanted to know more before withdrawing his endorsement of Mr. Moore.

The party, already reeling from the election losses they suffered on Tuesday, is defending a two-seat majority in the Senate and faces a handful of difficult elections next year.

Mr. Moore’s candidacy had already worried party leaders who had embraced Mr. Moore despite his long record of incendiary comments about gays, Muslims and African-Americans.

Alabama election law indicates, with little ambiguity, that the deadline has passed for candidates to be replaced on the ballot. The state election code says a candidate who wishes to withdraw from a race must do so 76 days before Election Day. The Alabama vote is in little more than a month.

“It’s too late to substitute a candidate,” said John Merrill, the Alabama secretary of state, a Republican. “Judge Moore will be the candidate on the ballot with this election cycle remaining on the schedule it’s currently on.”

Republican lawyers and strategists in Washington were engaged in a furious search on Thursday for creative ways around that restriction, seeking a loophole that would allow the party’s leadership in the state to anoint a new candidate. The prospect of a write-in candidacy, for a third candidate, was also under consideration, according to party aides.

Senator Lisa Murkowski, Republican of Alaska, who ran her own successful write-in campaign in 2010, said: “If in fact what I just read is true, he needs to get out of this race immediately. I think it’s pretty clear cut.”

She called for Senator Luther Strange, who was appointed to fill Mr. Sessions’s seat but lost to Mr. Moore in a bitterly contested Republican runoff in September, to run as a write-in.

One of the women, Leigh Corfman, told The Washington Post that she was 14 when Mr. Moore, 32 at the time, drove her to his home in Gadsden, Ala. He took off her shirt and touched her bra and underwear while also guiding her hand over his pants, Ms. Corfman told The Post.

“I wanted it over with — I wanted out,” she told the newspaper.

CNN reported that it had spoken with Ms. Corfman’s stepfather, who said the family “stands by” what was reported in The Post.

Republican leaders are in a politically perilous situation, saddled with an embattled nominee unwilling to step aside in one of the country’s most conservative states. The charges reignited hostilities between Mr. McConnell’s political allies, who poured millions of dollars into the campaign to stop Mr. Moore, and President Trump’s former chief strategist Stephen K. Bannon, who rallied support for the former justice.

“This is what happens when you let reckless, incompetent idiots like Steve Bannon go out and recruit candidates who have absolutely no business running for the U.S. Senate,” said Josh Holmes, a former McConnell aide.

Mr. Bannon did not immediately reply to text messages or phone calls, but Breitbart posted an article with Mr. Moore’s statement shortly before The Post published its report.

Steven Law, the head of a McConnell-aligned “super PAC” that led an onslaught against Mr. Moore in the Republican runoff, did not wait for a guilty verdict before he excoriated Breitbart for “defending ‘consensual’ sex between a 32-year-old and a 16-year-old.”

Private polling by both parties has shown that while Mr. Moore retains a passionate following among conservatives, he is a deeply divisive figure among more moderate Republicans, and some party officials now worry that the charges will convince moderates to stay home or vote for the Democratic candidate, Doug Jones, a former United States attorney.

The Jones campaign said in a statement that “Roy Moore needs to answer these serious charges.”

Cleveland Poole, the chairman of the Republican Party in rural Butler County, said those most likely to defect were not ardent Moore supporters but voters who already have doubts. “They are going to be put off by it and might well stay home,” he said.

In a statement, Gov. Kay Ivey, a Republican, called the allegations “deeply disturbing,” and said she would withhold judgment until “we know the facts.” Senator Richard Shelby, the dean of the state’s congressional delegation, told reporters in Washington that if the charges were accurate “he wouldn’t belong in the Senate.”

Mr. Doster, the adviser to Mr. Moore, said the candidate’s campaign chairman, Bill Armistead, had talked to members of Alabama’s congressional delegation after the report broke. “Everybody has been supportive,” Mr. Doster said.

But a Republican familiar with the conversation said the House members on the call had told Mr. Armistead it was imperative that they aggressively respond to the article or risk losing support from the party’s elected officials.

Randy Brinson, president of the Christian Coalition of Alabama, said he expected voters would mostly give Mr. Moore the benefit of the doubt.

“Until I see something different, I would support Roy Moore because of what he says he’s going to do and who he is as a person,” Mr. Brinson said.

Mr. Zeigler said the account given by Ms. Corfman was “the only part that is concerning.” As Mr. Zeigler described it: “He went a little too far and he stopped.”

Had the girl been 16 at the time and not 14, he added, “it would have been perfectly acceptable.”

For Democrats, the prospect of a wounded Mr. Moore was a gift.

“This is revolting and the Republican Party and everybody’s who endorsed Roy Moore needs to disavow his candidacy right now and ask him to withdraw,” said Senator Chris Van Hollen of Maryland, who leads the Senate Democratic campaign arm.

Until recently, few Democratic officials believed that Mr. Jones could topple Mr. Moore in a state that has not elected a Democrat to the Senate since 1992, and Democrats have debated fiercely whether to commit resources to the race. Now many think they have a chance to shrink the Republican majority to a single seat and potentially snatch the majority next year.