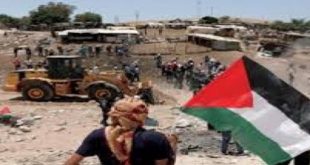 In its weekly report, the National Bureau reported that the number of settlement expansion in the West Bank, including Jerusalem, has increased several times since the Oslo Accord that as signed at the White House in Washington on Sep. 13th, 1993 between the Palestine Liberation Organization and Israel. Adding that settlements’ number in the occupied Palestinian territories increased to 158 in the West Bank, including Jerusalem since June 1967, the most recent of which was the settlement of Amihai, south of Nablus, and more than 250 outposts until sep. 2018. The National Bureau also noted that the number of settlers rose from about 115,000 before the signing of the Oslo agreement to about 765,000 settlers today.

Settlement activity continued at an accelerated pace due to the support provided by US protection to the Israeli occupation government. Within the context of attacks on Palestinian property, the Israeli occupation authorities notified the Palestinian citizens of the northern Jordan Valley of the confiscation of 1079 dunums of their land for “security purposes” in the Ras Ahmar, southeast of Tubas. Distributed over 15 plots of land, in five basins, all are “Tabo land”. The area of ​​the Al-Baqai’a Plain, which includes the Ras Ahmar is approximately 98,000 dunums. The Israeli occupation forces have been notified more than two months ago of the seizure of 68 dunums from the same area. It has preferred to invest in settlements in the occupied West Bank in general and in the Jordan Valley settlements in particular, allocating the necessary funds. The latter has recently allocated NIS 417 million for the development of settlements in the Dead Sea area in order to attract more settlers and Judaize the Jordan Valley areas.

In the course of these incursions, the Jerusalem city witnessed several attacks, including Talmudic prayers near the Al-Aqsa Mosque. During the incursion. In the Salfit governorate, bulldozers continue to bulldoz the lands of Palestinian farmers in a number of villages and towns in the Salfit Governorate. Bulldozing works are carried out inside and outside the settlements and in more than one location. The lands of Deir Balout, Kafr El-Deek, Rafat village and the town of Al-Zawia. Settlers of the settlement of “Atz Ephraim” continue to raze the settlement and build more settlement units at the expense of the lands of the village of Mesha west of Salfit and near the lands occupied in 1948. The occupation authorities has prevented farmers from entering their land behind the wall except in very few times.

The activities of the Israeli settlement government go hand-in-hand with a policy of ethnic cleansing in the face of the growing popular Palestinian resistance. More than 191 citizens participate for the third week in a row in the open sit-in strike on the land of Al-Khan Ahmar village, the majority of who are children and women. Popular delegations from different West Bank governorates have also participated, Christian clerics and dozens of foreign solidarity activists also participated. Residents of the Abu Dahuk’S clan, who live in the village since 51 years insisted that they will remain steadfast on their land and will not leave, even if the Israeli occupation forces demolish their homes.

Worth mentioning that the European Parliament, in turn, warned against the consequences of the demolition of Al-Khan Ahmar village, east of Jerusalem, and called for a firm response to the policy of undermining the two-state solution and the demolition of facilities financed by the EU. Foreign policy representative, Federica Mugrini, said that the Israeli government’s decision to demolish the village of Al-Khan Ahmar is part of a settlement plan that would undermine the two-state solution and prevent the territorial contiguity of the Palestinian territories. The EU considers settlement an obstacle to peace, calling upon Israel, the occupying Power to reverse the decision to demolish and forcibly displace the population in violation of international law and the 4th Geneva Convention.

At the same time, the International Committee of the Red Cross expressed its deep concern about Israel’s decision to demolish private homes and other facilities in the village of Al Khan. The head of the ICRC’s Jerusalem office, David Kane, said that the planned demolitions will have a fundamental impact on the lives and human dignity of the people of this community. As long as the policies of zoning and planning in the West Bank fail to serve the population living under occupation, they can not be used as a justification for the destruction of property. “As the occupying power in the West Bank, Israel must abide by international humanitarian law. Therefore, they must ensure the protection, security and care of the people living under occupation and ensure that they live a normal life as far as possible, in accordance with their laws, culture and traditions. ”

In Israel, B’Tselem called on the EU to act urgently to prevent the demolition of the village, as the Israeli High Court of Justice rejected the Palestinians’ petitions against the evacuation of the village and ordered its eviction in preparation for demolition.