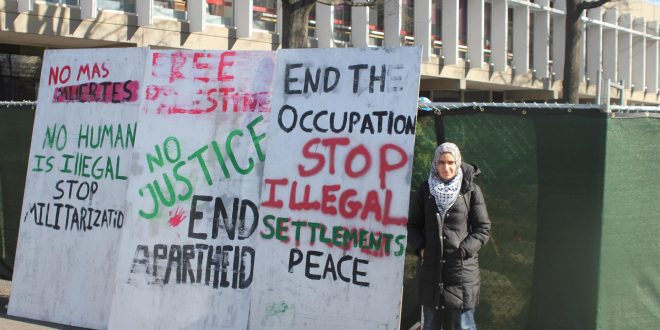 In his weekly report on Israel’s settlement activities in the West Bank, the National Bureau for the Defending Land and Resisting Settlements  ( NBPRS )  reported , that  Israel’s settlement activities cover all the West Bank governorates encouraged by the US, and the absence of the international accountability. The Netanyahu government continues its grave violations of international law that amount to war crimes through demolishing and displacing the Palestinians, and at the same time legitimizing settlement outposts and confiscating Palestinian land the last of which a plan no 3/515, which aims to expand the settlement of Tina by building 135 new settlement units on 260 dunums of the lands of the Dahiriya town.

In the northern Jordan Valley, the Israeli occupation authorities approved a recommendation by the Council of Settlements to recognize the “Givat Silit” outpost, which was established in 2001 as an official settlement as the borders of the new settlement are expected to reach Khirbet Farsi away about 10 meters from the last house. The second settlement in Sep. 2016, was initially built on a private Palestinian land, hundred meters away from the Givat Selek outpost that was established in 2001 and the Mahula outpost in 1968. In Jan. 2017, the settlers moved the outposts to the top of a hill adjacent to the taboo-registered land, but was seized land classified as State land. In the same area, the occupation authorities have also begun to transform the army camp of Rosh Pikka, which is located on privately-owned Palestinian land into a settlement outpost for 30 Jewish families. While the settlement associations continue to build a road linking the settlement outposts with the main road of the Jordan Valley.

A number of settlers from Efrat settlement confiscated a few months after they were evacuated by a decision of the Israeli High Court of Justice, Talat Anakhla, a mountainous hill facing the village of Artas, south of Bethlehem, with an area of about 400 dunums. In Jerusalem, the Jerusalem occupation Municipality has also signed an agreement with the Israel Lands Administration – ILA to build 20,000 new settlement units. According to the agreement, new settlement neighborhoods will be built, existing settlements will be expanded, industrial zones will be established to provide jobs, Plan of Greater Jerusalem. The new settlement encroachment extends from Jerusalem’s entrances on Begin Street to the Givat Ram area, the Pisgat Ze’ev settlement complexes, Har Khotsebim, the Yavil Karbat, the Malha, the industrial zone in Atarot, and the French Hill. Under the agreement, the ILA will invest NIS 600 million, while another NIS 800 million will be collected from the expected revenues from fees for the marketing of residential units. The two sides also agreed to invest NIS 1.4 million in infrastructure and public areas in the neighborhoods of the occupied city.

According to the last year’s budget of 2017-2018, Israel invested some NIS 4.5 billion in East Jerusalem, 87% of which is about NIS 3.9 billion for Jewish settlements and only 13% for Palestinian neighborhoods, although the Arab and Jewish population is roughly equal in occupied East Jerusalem . The Israeli occupation government and the municipality of Nir Barkat allocate about 99.8% of the land that Israel has controlled as “state lands,” most of which are private lands. However, the Palestinian owners are absent, Israel doesn’t allow their return, but gave an area of 674,000 for settlements purposes.

It was noted that an Israeli government’s document was issued this week by Israeli author, Yishai Friedman in the newspaper, Makor Rishon aims to legitimize the imposition of Israeli sovereignty over the city of Jerusalem and the West Bank, based on claims of Jewish eligibility in them, citing quotations giving Israel legal legitimacy to impose Its sovereignty in the occupied territories since June 1967.

On the level of defending the village of Al-Khan Al-Ahmar, the International Solidarity Movement which opposes the Israeli Supreme Court’s decision to demolish the village and deport its inhabitants, is expanding. The head of the delegation of the European Parliament for Relations with Palestine, Nekels Slikotz, said that the destruction of the village of Al-Khan Al-Ahmar and the forcible deportation of its inhabitants constitutes a serious violation of the 4th Geneva Convention, and amounts to a war crime. The 46-year-old Bedouin areas are threatened with deportation for the favor of illegal settlement expansion, which is of strategic importance as it preserves the continuity of the future Palestinian state. We support the Palestinian people’s right to self-determination and oppose the rule of Israeli occupation, colonialism and apartheid. The forcible transfer of the population under occupation is a serious violation of the Fourth Geneva Convention, “Those demolition orders issued by the Israeli authorities have the same goal of expanding settlements and dividing the West Bank, part of the Israeli settlement expansion policy that is illegal, as stated in the UN Security Council resolution  2334 “.