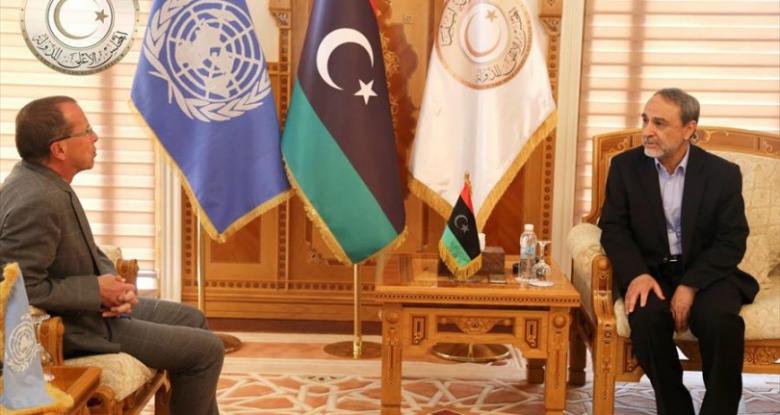 The Levant News — The top enemy in Libya at present is national division and fragmention, UN Special Envoy Martin Kobler has said. Stating that Libyans had to unite and that the military challenge from the so-called Islamic State was urgent, he called on the presidents of the House of Representatives and the State Council (Ageela Salah and Abdulrahman Sewehli) and head of the Presidency Council, Faiez Serraj, to meet and address this and other major issues.

He was speaking at a press conference with Sewehli during a one-day visit to Tripoli where he also met with the Presidency Council as well as with officials from the Al-Bunyan Al-Marous (“Impenetrable Wall”) Operations Room set up by it to combat the so-called Islamic State (IS). He also visited a detention centre for illegal migrants in Tripoli’s Abu Sleem district, and on leaving Mitiga Airport, he ran into Mahdi Al-Barghathi, the new government’s defence minister who had just flown in from Ras Lanuf.

Among the spate of tweets from him about the visit, he said that he had “assured the PC that Vienna meeting reinforced arms embargo but exemption can be given to regular forces that operate under the PC Command” – taken to mean purely the Al-Bunyan Al-Marous Operations Room and not the Libyan National Army forces under Khalifa Hafter.

In his press conference at which he described his talks with Sewehli and “frank” and “extensive”, he indicated that the House of Representatives had to amend the 2011 Constitutional Declaration and incorporate the Libyan Political Agreement. Until this happened, he said, neither the State Council nor other structures set up by of the agreement could “fully function”.

Describing the HoR and the State Council as twins, they had to work together to tackle Libya’s multitude of challenges, he stated.

He warned that the military situation on the ground threatened to dictate events, but that it was politics that should do so.

It was not clear if he was referring to the threat from IS or fears of civil war between forces supporting the GNA and those backing Khalifa Hafter.