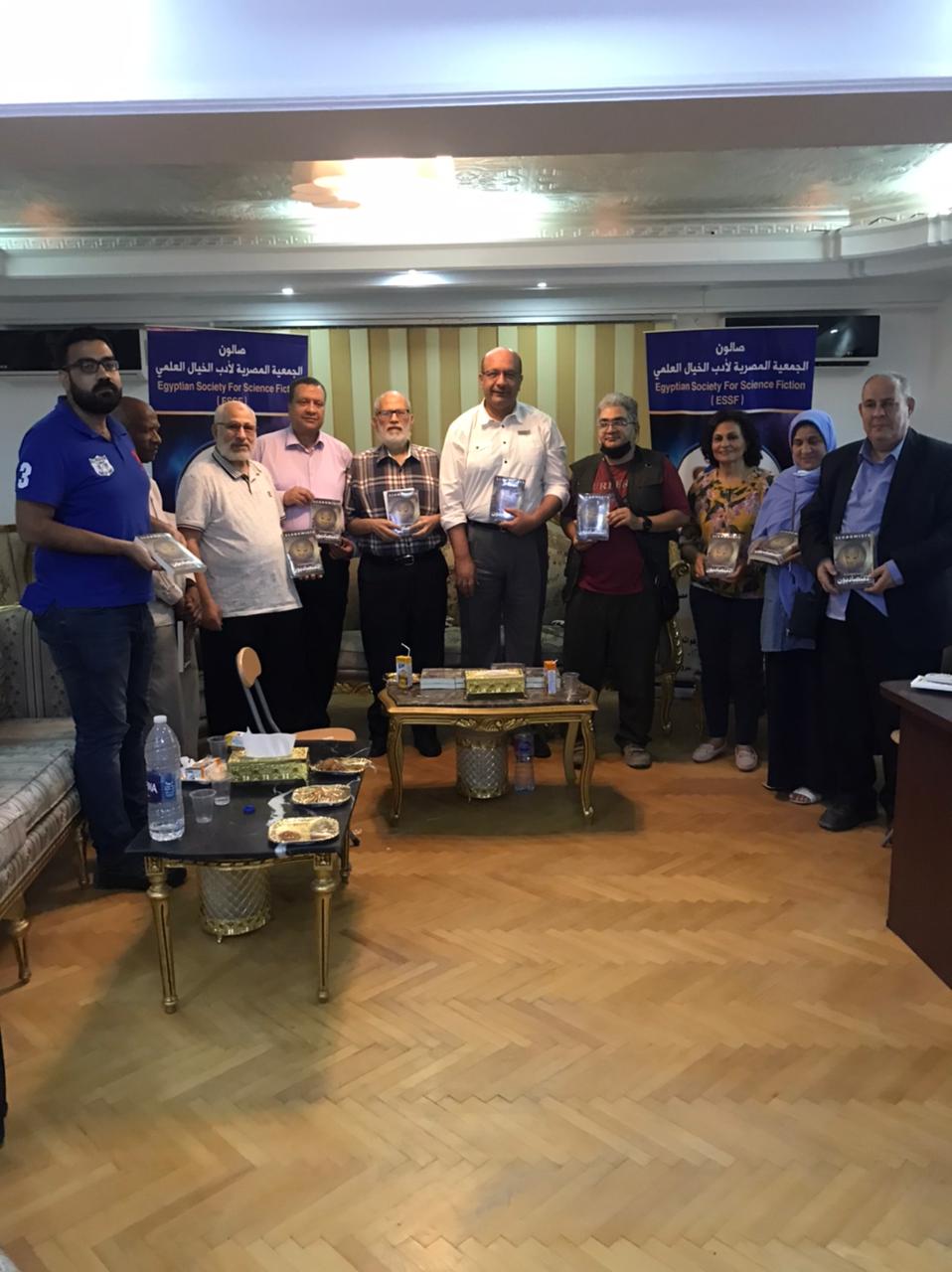 Image credits: A HAPPY OCCASION: The issuing of the first print of The Economist, with Dr. Hosam center stage at the headquarters of the ESSF. [27 May 2022]

Science fiction commentaries: ‘The Economists’, a much needed anthology from Egypt and Arab authors

The Economists is the latest publication of the Egyptian Society for Science Fiction in a long line of successes. It is the 8th issue to be precise of the Shams Al-Ghad (Sun of Tomorrow) series, edited by the founder and director of the ESSF Dr. Hosam Elzembely.

It is very unique in that the theme of this edition is economics – the policies of economics and the businesses of banks, companies and industries, and the inventions that drive prosperities for all humankind. There are no such books in existence on the Arabic bookshelves, a sci-fi anthology dedicated to economics. This was a masterstroke on the part of Dr. Hosam, filling a gap in our knowledge in Arabic literature. The critical essay in the anthology, “The Bourse: Between the Literature of Arab Realism and Science Fiction” by Mr Khaled Gouda, highlights this surprising lack of interest and detail on economics in Arabic literature, even realist literature. Nobody is interested in the stock market and how it works and what it does for the economy by raising the finances for investments in the so-called realist literature of the Arabic countries. The authors see it only as a source of temptation and corruption or a means of losing all your money in foolhardy pursuits. The only serious novel Mr Khaled encountered on the stock market was, ironically again, a science fiction novel.

Speaking to one of the contributors to the anthology, Dr. Emad El-Din Aysha, he explained how Dr. Hosam Elzembely came to the genius conclusion for such a book. He overheard Dr. Emad speaking to an African and American colleague and collaborator with the ESSF – Mame Bougouma Diene, one of the contributors to the ESSF first English publication Arab and Muslim Science Fiction: Critical Essays (McFarland, 2022) – who was visiting Egypt at the time and Emad (who has a degree in economics) talked about how he uses economic theory in his stories, almost in an way to educate Arab and English readers and the flash of inspiration happened. Dr. Hosam worked tirelessly to get the contest and the judges going and now the ESSF has one of its largest publications, with 25 stories, including an essay by Mr Khaled Gouda and a translation of the story by Dr. Hosam, “Aging”, translated by Dr. Areeg Ibrahim.

This is not a comprehensive review of the entire anthology but some highlights of some of the most interesting stories that I personally liked or made me notice. There is “Al-Kharab” (Garbage Heap or Wasteland) by Wael Abdel Rahim where people live in the most posh of residencies but according to a common style of life in terms of their rough clothes and ways of buying and selling things in the vegetable and bread markets and the fighting and overcrowding whilst they consume drugs with insults and callous disregard for public hygiene and orderliness. These luxurious buildings belonged once to the upper class but they vacated them, and the planet, going elsewhere in the outer space to not rub shoulders with the unclean commoners. It is as if the future with all its technology, the ability to travel far away in spaceships in the universe, will not change the true nature of snobbery for some human persons – or so sees the author.

“A Problem of Faith” by Abdulhakeem Amer Tweel, a Libyan author, is a dialogue with the self of an Artificially Intelligent man. The AI’s soul is bound by the specifications of his inventor and can only choose between two options, within the limits set again by his creator. For the AI has no emotions and passions to move him like the natural human being. Nonetheless the AI robot goes to a mosque to consult with an imam, to ask if he has a soul and will journey to heaven for his selfless good deeds that were programmed into him by his creator. The imam gives him hope despite all.

“U.A.C.N” by Wael Abdel Rahim is a story containing many prophecies the fulcrum of which is the development of uncordial relations between Europe and the United States, and with that the occurrence of many famines, and also the prediction that China will abandon its nutritional culture. More than this there will be wars in Europe in addition to the expiration of millions on the European and American continents because of corona virus. These prophecies bear no relation to current indicators of threats to the population of the planet in total thanks to global warming and climate change and the financial threats to the world economy. Instead when China joins the U.A.N, the Union of Arab Nations, the world begins to improve and cooperation happens between the nations of the world to combat corona and equally distribute vaccines all over the world, and from there come the international cooperation efforts – in person or virtually through advanced technologies – that finally put an end to economic decline and reverse the tide of rising global temperatures.

China emerges as a superpower in several stories in this collection of scientific fictions, but always in cooperation with the Arabs and Egypt specifically, it is worth pointing out. Some stories are satires and some are serious and some are both.

Emad El-Din Aysha’s four stories including “The Green Roof” is a story full of intrigue and excitement on every page because the stranger who is on the journey in the story with the hero, the tourist, does not reveal his true identity and so seduces the tourist into taking the trip with him along the Nile. This way the reader witnesses the many wonders along the way, all man-made in cooperation with nature. In the story the Egyptians invent a plastic screening that can breathe for the whole of the river Nile to keep humidity and water in and also create a habitat for plants for food and for profit and for medicines.

Another story is “Fairy in the Lamp” (or Genie in the Lantern) story reveals the power of observation, the ability of human beings over centuries and the consequences of investing such vital and inherent traits to achieve development . Producing and controlling energy by different means is a prominent example. Sand receives concentrated sun rays, becomes a soluble substance and conserves energy better than any battery. Using sand instead of typical materials through which batteries are made for mobile phones resulted in a positive solution to conserve and use power for longer period. The remaining stories by Dr. Emad are “A Remedy from Lightning” where experimentation for functioning energy caused the loss of many peoples during the past. Now power exists again due to functioning biotic fuel under restrictions of United Nations. An inventor of transferable electric fields succeeded in solving, at first, the problem of energy for mobile phones. He was so supremely optimistic when submitting his invention to energy companies whose incentives of competition and gaining profits were most important to them. They ignored using tests for safety and technical conformity standards, such as using the same wavelengths, which lead to catastrophes. People were burned alive by the mobile electrical fields and crashing planes and trains. Only those living without electricity were safe, mostly in the poor countries and places. However this unfortunate experiment generated restrictions on using energy systems in the future world, built by the survivors, that become exclusive for inventors only. Not investors as in the past. Life became better once we separated money from technology.

Finally “The Leading Heights”. This short story expresses the success of humanity in lengthening age through renewing blood by discarding chemical elements that are responsible for the Alzheimer disease among the aged people, then re-injecting the older people with pure blood. They will get an opportunity to accommodate themselves in their society. They make friends and continue to be productive through following new inventions made from the very substances that were polluting their bloods and corrupting their brains. They achieve an increase in directing and investing electricity while different age groups cooperate to launch a bridge into the moon, made of the sediments that cause Alzheimers!

A last word. Dr. Emad informs me that he mentioned The Economists anthology at a conference he participated in, via the internet. Chicon 8 or The 80th World Science Fiction Convention, from 1 to 5 September 2022. He mentioned the book in such sessions as “Equity vs. Equality in Science Fiction” with such prominent guests and organisers as A.L.DeLeon (the moderator, an author and TEDx speaker against poverty), distinguished editor Gautam Bhatia and distinguished author Laura Anne Gilman. It is good to see Arabs participating in international venues for the promotion of awareness of global science fiction traditions. Another prominent participator to the conference, another member of the ESSF, was Ahmed Salah Al-Mahdi, in the “Overcoming Structural Challenges Across the Globe”, with Dr. Bradford Lyau (moderator), M. Darusha Wehm and Vida Cruz-Borja from the Philippines.

The only thing left to do is to have a prominent Sudanese author representing science fiction to the world. Especially on the caliber of the great El-Tayeb Saleh, whom Dr. Emad mentioned in his presentation on “The Future of Science Fiction Is International”, with Leonardo Espinoza Benavides (moderator), Suyi Davies Okungbowa (from Nigeria) and Wole Talabi, also from Nigeria but living in Malaysia!