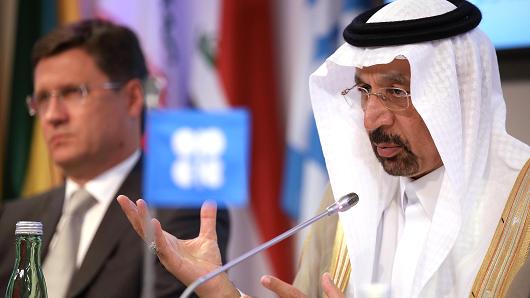 The biggest of the oil producers whose output cuts have helped shrink a global glut and driven prices to a 3 1/2-year high signalled for the first time that they are discussing easing the curbs.
While scaling back the supply caps is “on the table,” no decision has been made, Saudi Arabian Energy Minister Khalid Al-Falih said in an interview early Friday morning in St Petersburg. The Organisation of Petroleum Exporting Countries and its partners will in June discuss loosening the curbs that began in 2017, Russian counterpart Alexander Novak said at the same interview after a meeting between the two officials.

Speculation is swirling over when and by how much the producers will scale back cuts after they eliminated an inventory surplus that had sparked a price crash about four years ago. Market uncertainty has risen following renewed US sanctions on Iran that may curb the Islamic republic’s exports, and as economic turmoil in Venezuela drives a collapse of the Opec member’s oil industry. Crude’s rebound is also spurring concern that demand may falter.
Al Falih suggested Saudi may ease restrictions in the second half of the year, with Novak hinting Russia may do so in the third quarter.
Russia and Saudi Arabia share a common view on “consuming countries’ anxiety and concerns over potential supply shortages,” Al-Falih said. “We will ensure that the market remains in its trajectory towards rebalancing, but at the same time we will not overcorrect.” The two nations will meet at least two more times before Opec and its partners gather in Vienna next month, he said.

While Saudi Arabia has shown a desire for higher prices to bankroll domestic economic reforms and underpin the valuation of its state oil company in a planned initial public offering, the top Opec member and its allies are facing pressure from consuming nations as well as crude producing companies.
High enough
Indian Petroleum Minister Dharmendra Pradhan said earlier this month that he expressed concern about rising crude and its impact on consumers to Al Falih. He added that the Saudi energy minister had assured him that the Middle East nation and other producers would ensure that adequate supplies are available and that prices remain reasonable. In developing countries from Brazil to the Philippines, drivers are complaining about high fuel costs.
In Russia, some of the largest oil producers called for more flexibility after almost 17 months of output curbs. The cuts have achieved their goal and crude prices near $80 (Dh294) a barrel are high enough, according to the bosses of Lukoil PJSC and Gazprom Neft PJSC.
“Earlier we said that we will monitor the market situation, now we can say that we are looking into the issue” of a smooth recovery in output to meet growing demand, Novak said in the interview on Friday. He added that he and Al Falih discussed prices and the market situation, including Venezuelan production and risks related to Iran.
US supply
In Washington, Democrats are using high gasoline prices, approaching $3 a gallon for the first time since 2014, as a political tool, accusing the White House of not doing enough to shield consumers.
Recent price gains have been driven by American actions such as President Donald Trump’s withdrawal from a 2015 deal between Iran and world powers that had eased sanctions on the Arabian Gulf state in exchange for curbs on its nuclear program. Earlier this month, Al Falih and UAE Energy Minister Suhail Al Mazroui said recent moves in oil prices have been driven by geopolitics and that global supply remains ample.
Additionally, record production in the US, which is not part of the deal among global producers to cut output, is a key issue that’s complicating strategy for Opec and its allies.
Brent crude, the benchmark for more than half the world’s oil, was down 0.2 per cent at $78.66 a barrel at 10:35am. Singapore time. Earlier this month, prices had traded above $80 a barrel for the first time since November 2014. US. West Texas Intermediate futures were at $70.60 a barrel.
“We will be coordinating closely, monitoring the market almost on a daily basis,” Al-Falih said on Friday. “We’ll consult with other countries. Each of them has a voice and their voices matter to us.”