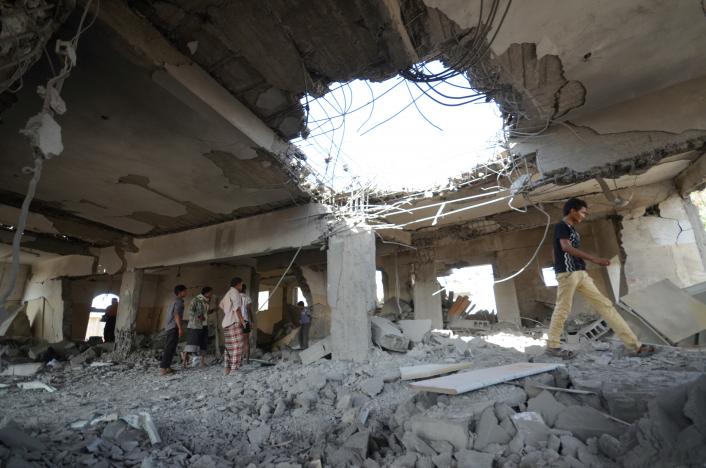 The Levant News — Saudi coalition warplanes bombed a security complex near the Yemeni port city of Hodeidah, killing 60 people including inmates of a prison on the site, a regional official, relatives and medical sources said on Sunday.

The prison in the city’s al-Zaydiyah district was holding 84 inmates when it was struck three times late on Saturday, Hashem al-Azizi, deputy governor of the Houthi rebel-controlled Hodeidah province of the same name, told Reuters.

Local officials said the site lies within a security complex for the area guarded by Houthi militiamen but that only prison security guards were present during the night-time air strike.

The Saudi-led coalition has been fighting Yemen’s armed Houthi movement since March 2015 to try to restore the internationally recognized President Abd-Rabbu Mansour Hadi, who was driven into exile by the Iran-allied group in late 2014.

A Reuters witness at the security complex said the entire building was destroyed and medics pulled about 17 bodies away – many of them missing limbs – while others remained stuck under the rubble.

One of the strikes directly targeted the building, the witness added, bringing it down over the heads of the prisoners, while two others hit the gate of the complex and nearby administration buildings.

A spokesman for the Saudi-led coalition did not immediately respond to a Reuters request for comment.

The air attack was one of the deadliest among thousands of bombings which have largely failed to dislodge the Houthis from the capital Sanaa but have repeatedly hit schools, markets, hospitals and homes, killing many civilians.

Rights groups have said the raids may amount to war crimes, but an investigative body set up by the coalition largely defended its methods in an August report which concluded that Houthi rebels regularly deploy to civilian sites.

The Houthis deny this, and a top official in the movement criticized the United Nations and the Saudis’ key ally and arms supplier, the United States, for not doing enough to hold the kingdom accountable for its air strikes.

“We condemn the position of the international community and the U.N. for providing cover for the crimes of Saudi Arabia against Yemenis, and they are subject to the wishes of America,” Saleh al-Samad said in a statement late on Saturday.

The bombing may signal a renewed uptick in violence a day after Hadi rejected a new U.N. peace proposal to end the turmoil in the impoverished Arabian Peninsula country, saying the deal would only be a path to more war and destruction.

Speaking after meeting U.N. envoy Ismail Ould Cheikh Ahmed in Riyadh, Hadi said the agreement would “reward the rebels and penalize the Yemeni people and legitimacy”, according to the government-controlled Saba news agency.

According to a copy of the proposal seen by Reuters, the plan would sideline Hadi and set up a government of less divisive figures.

Hadi’s opponents accuse him of commanding only a small support base in Yemen and of being unable to bring its warring factions together given that he invited the Saudi-led coalition to intervene in the civil war.