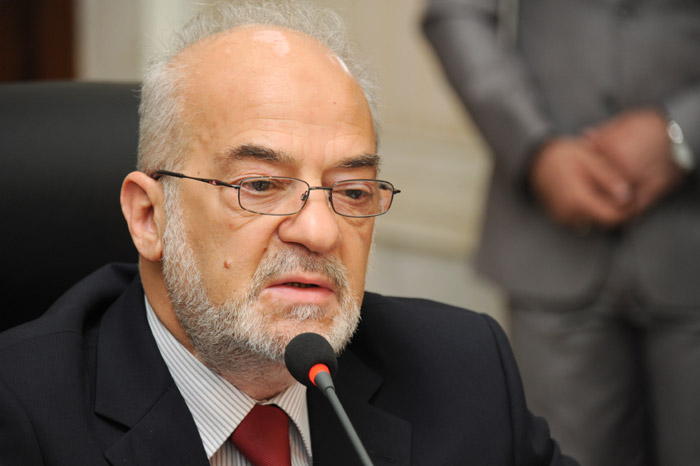 BEIRUT: Iraqi Foreign Minister Ibrahim al-Jaafari’s defense of Hezbollah in a speech before the Arab League has prompted the Saudi delegation to withdraw from the meeting, an Iraqi news agency reported Friday.

“Whoever accuses the Popular Mobilization forces and Hezbollah of terrorism is the one who supports and adopts terrorism,” Jaafari said in his speech, a foreign ministry source told the Iraqi Media News Agency (WAA).

Jaafari expressed solidarity with Hezbollah in his speech, underlining that the “Popular Mobilization forces and Hezbollah safeguarded the dignity of Arabs.”

The Iraqi FM rejected attempts to distort the image of Hezbollah, saying that the party’s Secretary-General Sayyed Hasan Nasrallah “is an Arab hero who defended values and principles.”

Tensions have intensified between Riyadh and Hezbollah since March 2015 over the war in Yemen, where the rivals support opposite sides.

The GCC and a meeting of Arab interior ministers last week designated Hezbollah as a terrorist organization, citing its role in the conflicts in Syria, Yemen and Iraq. The interior ministers of Iraq, Algeria and Lebanon rejected the labeling.

Nasrallah disclosed for the first time over the weekend that his party had secretly sent fighters to Iraq to fight ISIS, saying that his group had fought under local command and did not interfere in the country’s internal affairs as Saudi Arabia did in other regional states.

“Sunnis have been harmed by ISIS in Iraq more than the Shiites. After being asked to help in the fight against this globally renowned terrorist group, we took some fighters from south Lebanon, some from Syria and some from Yemen, and flew them to Iraq secretly,” Nasrallah said in his speech Sunday.

The development came amid strained relations between Hezbollah and Saudi Arabia.

Last month, the Gulf state suspended $4 billion in aid to the Lebanese Army and police in response to stances taken by Lebanese officials that oppose the “brotherly” ties between the two countries.

In January, Iraq summoned the Saudi ambassador after he suggested Iranian-backed Shiite militias were exacerbating sectarian tensions in Iraq.

Iraqi officials have on numerous occasions accused Saudi Arabia of supporting terrorism in the country.