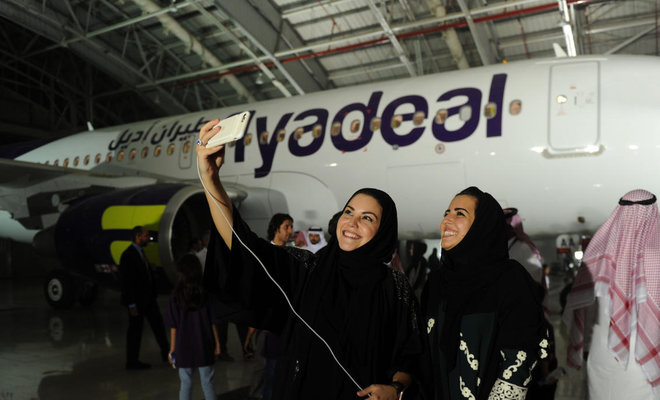 Flyadeal, the low-cost airline owned by the national airline of Saudi Arabia, will issue a request for proposal (RFP) bids for 50 aircraft in the next month, the carrier’s chief executive said.

“We’re looking at around 50 aircraft including options. This will be with the manufacturers,” Con Korfiatis told The National. “We expect to issue that RFP very shortly over the next month.”

The Jeddah-based airline, which started operating last month on the kingdom’s national day, has leased aircraft to date but is considering a fleet order of narrowbody Airbus A320s or Boeing 737s, Mr Korfiatis said. A choice of either plane models would have a projected value of US$5 billion at average listed prices before discount.

“We are taking an open mind with this, we are going out and asking the manufacturers to put their best forward … because this will be the long-term decision for flyadeal and whatever way that falls we expect the outcome of it will be that we will be seeking one aircraft type. It doesn’t mean it’s going to be the A320. It could be [the 737],” Mr Korfiatis said.

Independent of the potential plane order, the budget carrier will have a fleet of five A320s by the end of this year and eight by mid-2018. Financing of the planes could comprise a “range of possibilities” that may include bank loans and other various other forms of financing, he added. “That’s a decision that hasn’t been made. It’s not out of the question, it’s a possibility,” Mr Korfiatis said when asked if the carrier has plans to IPO.

As part of its economic diversification drive, the National Transformation Programme and Vision 2030 which aim to lessen the country’s dependence on oil, Saudi Arabia is privatising its transport industry, eventually transferring ownership of all its airports to its sovereign wealth fund known as the Public Investment Fund.

The government wants state-owned assets to function efficiently, generate returns as private companies, effectively removing the operational and financial burden on the state. In 2012, Saudi Airlines Catering raised $347 million in a 30 per cent listing of its shares.

Flyadeal, which is owned by Saudia, started flying from Jeddah to the capital Riyadh in September with a promotion fare of 48 Saudi riyals (Dh46.99). The carrier’s standard fares start at 98 riyals. The airline will have about eight aircraft before the middle of next year that have been leased from Dubai Aerospace Enterprise. The immediate focus is to cover the domestic market in the kingdom with an eye to expanding regionally and eventually flying to international destinations.

“We don’t feel we can succeed and be effective unless we offer a full network offering to the customers in the kingdom and the region,” Mr Korfiatis said. “In a four to five-year timeframe we see ourselves to flying to over 60 routes domestic and regional.”

Mr Korfiatis declined to specify a passenger load factor on flights since starting operations, but said they were running high.

Flyadeal competes with Riydah-based budget carrier Flynas, which began operating in 2007 and is partly owned by Kingdom Holding, the investment vehicle of Prince Alwaleed bin Talal. Regionally, the flyadeal will compete with the Sharjah-based low-cost carrier Air Arabia, flydubai and Kuwait’s Jazeera Airways.

Flyadeal will consider tapping into the Indian subcontinent market in the future when it begins to expand internationally; leveraging the large number of people from that region who reside in the Middle East.

“That certainly will figure in our international expansion plans,” Mr Korfiatis said.

His outlook for the aviation and travel industry is bullish as tourism and transportation growth figures factor prominently in the continued recovery of the world economy.

“The proportion of global GDP that those sectors are expected to represent in the years to come is massive and its driven, really a lot, by the change in lifestyle,” he said.

“If you look at the current generation of millennials, which are a huge proportion of the customers we are getting on flyadeal in the kingdom at the moment, they are more curious, far more interested in travel and exploring and getting around.

"Airlines are the facilitators, we are the enablers … If the airline industry doesn’t continue to grow those outcomes won’t happen," Mr Korfiatis said.

" We believe they will happen because there’s an appetite for them.”