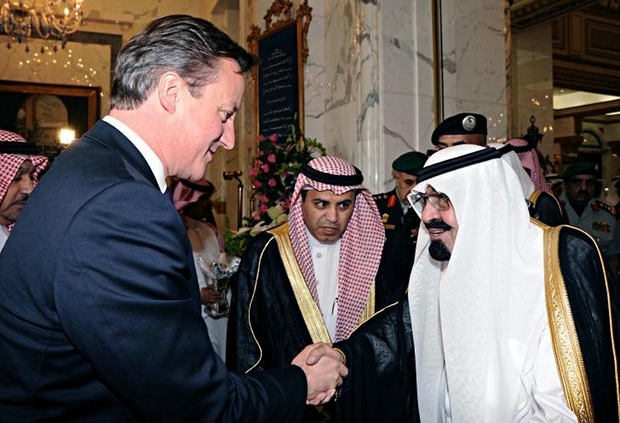 A handout picture released by the Saudi Press Agency (SPA) shows Saudi King Abdullah bin Abdul Aziz (R) shaking hands with British Prime Minister David Cameron during a meeting in the Saudi coastal city of Jeddah on November 6, 2012. Cameron met the king and top Saudi officials in Jeddah after a two-day visit to the UAE, where he secured a defence partnership with the Gulf state. AFP PHOTO/HO/SPA

THE LEVANT NEWS — The UK has sold £5.6bn ($8.2bn) of arms to Saudi Arabia since David Cameron became Prime Minister, despite widespread human right concerns, a new report has shown.

Cameron’s governments have since May 2010 overseen the sale of Hawk fighter jets and bulk sales of machine guns, bombs and tear gas, according to research released on Wednesday by the Campaign Against Arms Trade (CAAT) .

The report says that the UK has sold arms to 24 of the 27 states that it considers to be “countries of humanitarian concern”.

According to reports in The Daily Telegraph, published in May, Saudi Arabia has access to twice as many British-made warplanes in its bombing campaign in Yemen than the entire Royal Air Force.

While the Saudi’s boast of having 100 battle-worthy planes for the operation, around 50 percent of which are believed to have been manufactured in the UK, the UK could only muster 36 Tornado GR4 bombers if it were to conduct a similar air campaign, military experts told The Telegraph.

The UK has been carrying out air strikes in Iraq since 2014 and in December last year MPs voted to expand air strikes against Islamic State group targets in Syria. Before the extension to Syria, however, the Commons Defence Select Committee criticised the RAF by saying that it had only committed “strikingly modest” military resources to the US-led campaign.

Bombs and ammunition, which were originally intended to be used by the British Army, have also been diverted to Saudi Arabia, military sources told Defence News in July.

Riyadh has also come under fire for its role in the bombing campaign in Yemen aimed at rolling back the country’s Houthi militias and their supporters, with Amnesty International accusing the largely Arab coalition of war crimes.

The UN Office for the Coordination of Humanitarian Affairs says that 2,795 civilians have been killed and 5,324 wounded since Saudi Arabia and its allies began bombing in March.

Amnesty International has accused the UK of fuelling the civil war in Yemen and breaching domestic, European and international law by selling munitions and bombs to Riyadh.

“The income of BAE is being put over the rights of people being executed and tortured. It’s completely inconsistent to condemn these regimes while signing off on billion-pound arms deals.”

The UK government, however, has defended its relations with Riyadh.

Tobias Ellwood, a junior minister at the Foreign Office, on Tuesday said that London had repeatedly raised human rights concerns with Saudi authorities but that it was a delicate balancing act.

“The human rights situation in Saudi Arabia reflects widely held conservative social values and as such needs to move at a pace that is acceptable to its society.”

“We believe that it is more effective to work with other countries to improve and reform their systems, rather than criticise from the sidelines,” Ellwood added.

In October last year, Britain’s most senior Foreign Office official Sir Simon McDonald admitted to media that human rights were no longer a “top priority for the government”.

His comments were interpreted to mean that the Foreign Office had changed course since Philip Hammond took over as Foreign Secretary in 2014, but UK’s close relations with Saudi Arabia span decades with previous administrations also penning billion-pound deals with Riyadh.

CAAT estimates that the government of Cameron’s predecessor Gordon Brown, also oversaw the sale of more than £2bn ($3bn) worth of arms in two years.

“Two-thirds of UK arms exports go to the Middle East, and that’s unlikely to change. We know that Saudi Arabia is arming a number of groups in and around Syria, but we’ve no idea what weapons are being sent there. Once a weapon enters a war zone there’s no such thing as arms control,” Smith said.