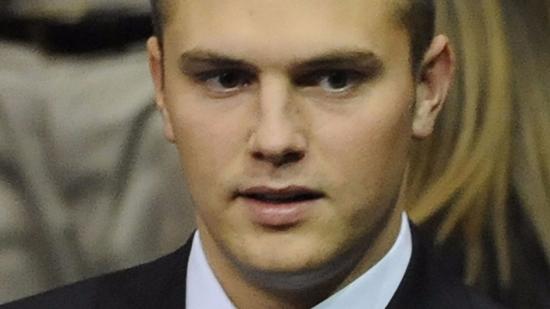 Sarah Palin’s oldest son, Track, has been arraigned on charges that he assaulted his father at the family’s home in Alaska.

Police were called to the home Saturday night, after Sarah Palin, the former Alaska governor and 2008 Republican vice presidential nominee, told police her son was “freaking out” and on some type of medication, according to an affidavit by Wasilla Police Officer Adam LaPointe.

The affidavit states that Todd Palin was bleeding from cuts on his head. He told police the dispute began when Track Palin, 28, called to retrieve his truck.

Todd Palin said he told Track Palin not to come but that his son said he would come anyway to beat him up. Todd Palin told police he got his pistol “to protect his family.”

Track Palin told police he broke a window, disarmed his father and put him on the ground.

FILE–In this Sept. 3, 2008, file photo, Republican vice presidential candidate Sarah Palin, right, holds her son Trig, as she is joined by her family on stage after her speech at the Republican National Convention in St. Paul, Minn., Wednesday, Sept. 3, 2008. From left are son, Track, daughter, Bristol and her boyfriend, Levi Johnston, daughters Willow and Piper and husband, Todd. Police arrested the oldest son of Sarah Palin on charges related to domestic violence for the second time in as many years. Palin was arraigned Sunday, Dec. 17, 2017, on three counts of felony burglary, misdemeanor reckless assault and misdemeanor criminal mischief. Each of the charges was related to domestic violence, according to court documents. (Ron Edmonds, file/Associated Press)

LaPointe wrote that Todd Palin and Sarah Palin had left the home when police arrived and that Sarah Palin was visibly upset.

Track Palin yelled at officers, calling them peasants, and “moved around in a strange manner” before being arrested without incident, the affidavit states.

Track Palin was arraigned Sunday on domestic violence-related charges of burglary and assault. Court records did not immediately list an attorney for him. He is scheduled for a preliminary hearing next week.

This is the second time in two years that Track Palin has been arrested in a domestic violence case.

In 2016, Palin was suspected of punching his girlfriend, who then became concerned that he was going to shoot himself with a rifle, court documents said.

He faced several charges but pleaded guilty to possessing a firearm while intoxicated and the other charges were dismissed.

His then-girlfriend later filed for custody of their child, and in January she requested a protective order against Track Palin.

“Given the nature of actions addressed last night by law enforcement and the charges involved, the Palins are unable to comment further,” Tiemessen said. “They ask that the family’s privacy is respected during this challenging situation just as others dealing with a struggling family member would also request.”

Sarah Palin indicated when her son was first accused of domestic violence in 2016 that post-traumatic stress disorder might have been a factor.

Bahraini king awarded by outgoing Trump with Legion of Merit