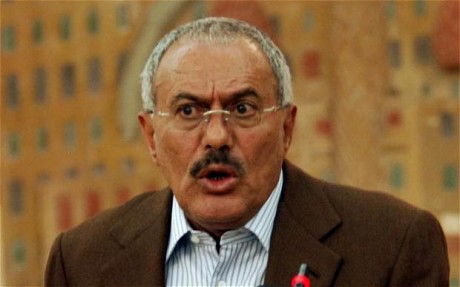 Ali Abdullah Saleh, the former president of Yemen, said on Saturday he was ready for a “new page” in ties with the Saudi-led coalition fighting in Yemen if it stopped attacks on his country, in a move that could pave the way to end nearly three years of war.

The apparent shift in position came as Mr. Saleh’s supporters battled Houthi fighters for a fourth day in the capital, Sanaa, in fighting which the International Committee of the Red Cross said has killed dozens of people.

The fighting was the most serious since the Houthis and Mr. Saleh’s General People’s Congress made common cause against the Saudi-led coalition, which joined the Yemen war in 2015 to try to restore the internationally recognized government of President Abd-Rabbu Mansour Hadi to power.

The clashes between Mr. Saleh’s supporters and the Houthis underscore the complex situation in Yemen, one of the poorest countries in the Middle East, where a proxy war between the Iran-aligned Houthis and the Saudi-backed Hadi has caused one of the worst humanitarian catastrophes in recent times.

“I call upon the brothers in neighboring states and the alliance to stop their aggression, lift the siege, open the airports and allow food aid and the saving of the wounded and we will turn a new page by virtue of our neighborliness,” Mr. Saleh said in a televised speech.

“We will deal with them in a positive way and what happened to Yemen is enough,” he added.

Mr. Saleh, who was forced to step down in 2011 after a mass uprising against his 33 years in office, said Yemen’s Parliament, which is dominated by his party, was the only legitimate power in the country and was ready for talks with the coalition.

In a statement carried by the Saudi-owned Al-Hadath channel, the coalition said it was “confident of the will of the leaders and sons” of Mr. Saleh’s political party to return to the Arab fold.

Mr. Hadi, in a statement after a meeting with his advisers, also said he was ready to work with Mr. Saleh against the Houthis.

“The meeting calls for turning a new page with all the political sides … and to form a broad national coalition that will lay the foundations for a new era and unify everyone against the coup militia,” the statement said.

The coalition accuses Iran of trying to expand its influence into Arab countries, including Yemen, which shares a long border with Saudi Arabia, by aligning with the Houthis and Mr. Saleh.

The Houthis accused Mr. Saleh of betrayal, and vowed to keep up the fight against the Saudi-led coalition.

“It is not strange or surprising that Saleh turns his back on a partnership he never believed in,” the group’s political bureau said in a statement. “The priority has been and still is to confront the forces of aggression.”

The Houthi group leader, Abdel-Malek al-Houthi, had earlier appealed to Mr. Saleh to avoid any escalation, saying that the crisis would only serve Yemen’s enemies.

Residents of Sanaa described heavy fighting in Hadda, a southern residential district where many of Mr. Saleh’s relatives live, early on Saturday, with sounds of explosions and gunfire heard while the streets were deserted.

The fighting eased in the afternoon as Saleh supporters gained the upper hand.

There was no immediate word on casualties, but Robert Mardini, regional director of the International Committee of the Red Cross, writing on his Twitter account, said that dozens have been killed and hundreds were wounded in the fighting which began on Wednesday after a dispute erupted over a mosque in the capital.