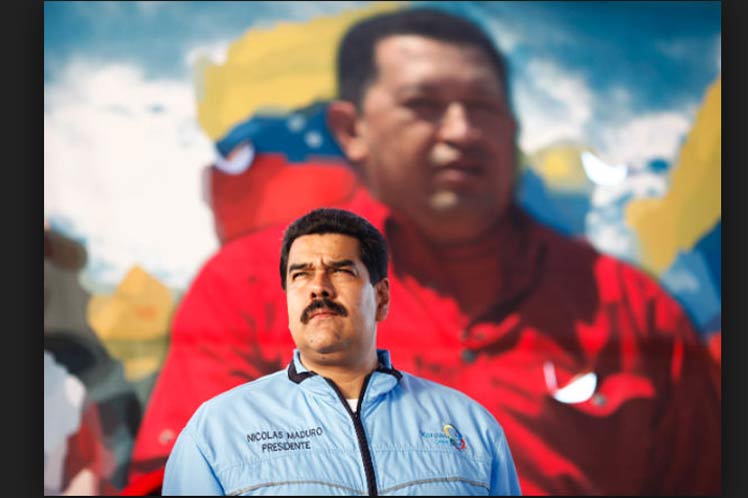 Image credits: The legacy of Hugo Chavez still lives on

To compensate for Washington’s ban on energy imports from Russia, imposed in response to the war in Ukraine, US officials have quietly made overtures to an antagonistic pair of oil producers, Iran and Venezuela. It is too early to tell whether the unorthodox attempt to make up for the oil-supply shortfall will bear fruit.

So far, the main result of the administration’s endeavors has been a pushback from Republicans and Democrats alike, along with stern warnings from Venezuelan and Iranian opposition groups about the dangers of hasty overtures to the regimes in Caracas and Tehran.

US President Joe Biden announced the decision to block all imports of Russian oil, natural gas and coal on March 8, in the hope of piling further economic pressure on Moscow to halt its invasion of Ukraine, which began on Feb. 24.

Western nations have condemned what they view as an unprovoked attack on a sovereign nation, and responded with sanctions targeting Russia’s financial infrastructure and its wealthiest individuals.

Moscow said its “special military operation” aims to protect the security of Russia and the Russian-speaking residents of Ukraine’s eastern Donbas region.

The US ban on energy imports could remove more than 10 million barrels a day of oil from Western markets. Last year, the US alone imported nearly 700,000 barrels a day of crude oil and refined petroleum products from Russia. These will now cease.

“This step will deprive Russia of billions of dollars in revenues from US drivers and consumers annually,” the White House said when it announced the ban.

Crude prices were already rising sharply on the back of surging global energy demand linked to the easing of COVID-19 restrictions in many countries. Now the war in Ukraine has sent prices soaring, with knock-on effects on the prices of food and imported consumer goods.

Analysts at JP Morgan and Bank of America predict that disruption to Russian energy flows could push oil prices to as high as $185-$200 a barrel.

“Inflation will accelerate in March and April as the knock-on effects of the Russia-Ukraine war push prices even higher at supermarkets, gas pumps and on utility bills,” Bill Adams, chief economist for Comerica Bank, predicted in a recent report.

For months, Republicans have been blaming Biden and the Democrats for soaring fuel prices by tying them to what they call the president’s “war on American energy.”

“The Biden White House’s talking points on oil and gas seem to be written by an 18-year-old intern who is taking freshman socialism,” Republican Senator Ted Cruz said.

Some analysts argued that the higher prices before the invasion of Ukraine were caused by supply-demand mismatches related to the COVID-19 pandemic.

Russia is the world’s third-biggest producer of oil after the US and Saudi Arabia. It supplies about 25 percent of Europe’s oil and about 40 percent of its natural gas needs. If Europe follows the example of the US and bans all Russian energy imports without having alternatives in place, the effects could be economically devastating for the continent.

Additional supply from Arab oil producers, including Iraq, Kuwait, Qatar, Saudi Arabia and the UAE, could help to compensate for some of the supply shortfall. However, several OPEC members, including Saudi Arabia, have already ruled out boosting oil output.

Under the circumstances, the Biden administration is looking to some of the more unlikely candidates for help to make up the shortfall, such as Iran and Venezuela, regimes long shunned by Washington and squeezed by sanctions.

However, years of antagonism have left those two regimes in no mood to ride to the rescue — unless sanctions relief and political goodwill are offered in return.

In Iran’s case, this would mean expediting the revival of the 2015 Joint Comprehensive Plan of Action, also known as Iran nuclear deal, from which President Donald Trump unilaterally withdrew the US in May 2018 and reimposed sanctions on Tehran.

As a result of the US-led embargo, Iran, which pumped an average of 2.4 million barrels of oil a day in 2021, has been unable to sell even half of what it produces.

Although Tehran has cultivated close ties with Moscow in recent years — a process facilitated by overlapping political objectives in Syria, for example — it senses a whiff of opportunity provided by the Ukraine crisis to wriggle free of at least some US sanctions, according to political analysts. Iranian officials have said they are on standby to boost oil production as soon as nuclear negotiators in Vienna rubber-stamp a renewed accord.

“The Islamic Republic of Iran is ready to increase its production and exports to the pre-November 2018 level,” Javad Owji, Iran’s oil minister, said recently, according to a report by the regime’s official IRNA news agency.

“It is up to the major consuming countries to take the necessary steps to maintain stability and calm in the oil market,” he added after a recent OPEC meeting, according to Shana, the ministry’s official agency.

“I promise to reach the highest oil-export capacity within one to two months, as soon as the green light from Vienna is given.”

Opponents of the Iranian regime have urged the Biden administration not to ease its pressure on Tehran, which the US considers a state sponsor of terrorism. Iran’s powerful Islamic Revolutionary Guard Corps, a key supporter of Hezbollah and other militant groups throughout the Middle East, plays a key role in the nation’s oil sector.

US allies in the Middle East worry that Washington’s rush to plug the supply gaps in the global oil market could result in a feeble new nuclear accord that will allow Tehran to keep a large stockpile of enriched uranium, continue to expand its ballistic missiles program, and go on arming its proxy militias in the region.

Closer to home, the Venezuelan government, sensing a similar opportunity provided by the US outreach, has signaled that it, too, is primed and ready to boost oil production and help make up the shortfall in supplies, in exchange for sanctions relief — much to the chagrin of the opposition.

“The doors of Venezuela are open to invest, to produce oil, gas, and to provide oil and gas stability to the entire world, including the US,” Nicolas Maduro, the president of Venezuela, said in comments published on the website of the state-run oil company, PDVSA.

Venezuela, which has the world’s largest-known reserves of oil, has been under US oil sanctions since 2019. They were imposed shortly after Maduro won re-election in a vote widely regarded as rigged. His socialist regime is blamed by many for the endemic corruption and economic mismanagement in Venezuela, which has resulted in about 4 million people fleeing the country.

It was therefore a significant development when a delegation of senior White House officials traveled to Caracas on March 5 to meet Maduro. It was the first high-level talks between the countries in years.

Although details of the meeting have not been fully disclosed, it is thought the delegation discussed steps toward easing sanctions and helping Venezuela to increase oil production, sources familiar with the matter told the Wall Street Journal.

Felix Plasencia, Maduro’s foreign minister, said US oil companies would be welcome to return to Venezuela, “if they accept that the only, and legitimate, government of Venezuela is the one led by President Nicolas Maduro.”

In what appears to have been an act of good faith, two American prisoners, including a former oil executive, were released from Venezuelan custody following the visit and Maduro agreed to restart talks with the nation’s opposition.

Nevertheless, Biden’s overtures to Caracas have proved unpopular in Washington, with even prominent Democrats questioning the wisdom of mending fences with an authoritarian regime — and an ally of Russia to boot.

“The democratic aspirations of the Venezuelan people, much like the resolve and courage of the people of Ukraine, are worth much more than a few thousand barrels of oil,” Democratic Senator Bob Menendez, chairman of the Senate Foreign Relations Committee, said.

Republican Senator Marco Rubio said: “The White House offered to abandon those seeking freedom from Venezuela in exchange for an insignificant amount of oil.”

Other opponents of a possible thaw in relations with Caracas point out that it would require tens of billions of dollars and years of investment to increase oil production in Venezuela, rendering the move impractical in the face of the immediate supply problems.ad

Crippling the Russian military economy by attacking its oil and gas revenues without causing great harm to the world economy might prove too difficult a task for the US to accomplish — taking it down a road littered with unpalatable agreements with unsavory regimes.

No matter how Washington chooses to respond to the energy shortfall, one thing is certain: The Russian invasion of Ukraine has resulted in the biggest geopolitical shake-up in decades, which is fundamentally redrawing the world energy map.