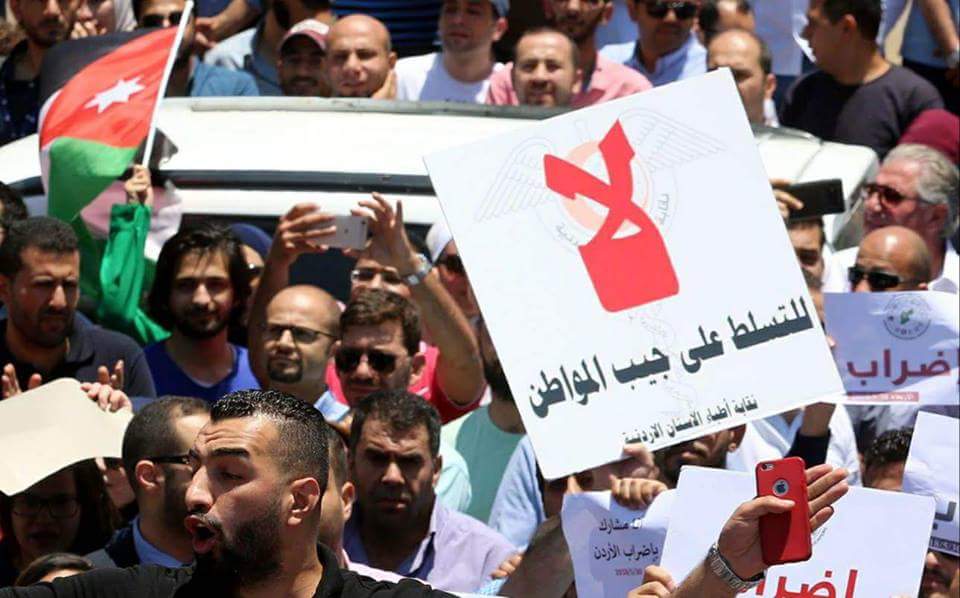 Rising tide of tensions and protest calls in Jordan

When a flash flood swept a group of schoolchildren to their deaths in Jordan last month, a wave of public criticism pointed to wider discontent within the kingdom.

The backlash against the government on social media questioned how anyone had been allowed into an area at risk of seasonal flooding near the Dead Sea. Two ministers were sacked over the tragedy and King Abdullah ordered an inquiry.

The reaction reflected the challenges facing a government struggling to win public support over a range of issues, chief amongst them tax increases needed to help plug the state’s gaping budget deficit.

Criticism on Facebook and Twitter has been running at a high pitch all year with little or no respite even after King Abdullah replaced the government in June following a rare wave of protests over the economy.

“Prison does not scare us and the word of justice we will say as long as we live. The country must get fixed,” political satirist Ahmed Hassan Zoubi tweeted on Nov. 17.

King Abdullah’s half brother, former crown prince Hamza, has also weighed in, taking to Twitter in September to demand a crackdown on corruption in the public sector as a starting point for reform - a call voiced by the king himself.

For Jordan, a U.S. ally whose stability has been a defining feature of the Middle East for decades, this has been an uncomfortable year.

The government has been forced to cut spending and raise taxes, confronted by the economic impact of years of regional turmoil and diminished Gulf Arab support as a result of falling oil prices and the Yemen war.

Adding to the pressures, Donald Trump’s proposed Middle East peace plan has hit a political nerve in Jordan, where millions of citizens of Palestinian refugee origin live alongside native Jordanians.

Despite questions over whether the president’s “ultimate deal” will get anywhere, his approach has stirred old fears of any attempt to settle the conflict in a way that would suit Israel but forgo Palestinian rights at Jordan’s expense.

With its stability underpinned by a powerful military and security apparatus, Jordan has developed one of the Arab world’s more open economies, investing in education and infrastructure including its gleaming airport and roads.

A bulwark against Islamist militancy, Jordan has made peace with Israel and absorbed waves of Palestinian, Iraqi and Syrian refugees. It also navigated its way through the 2011 Arab Spring, though it still faces some of the issues that ignited regional turmoil that year, notably youth unemployment.

Since the summer protests, there has been no sign of unrest in the streets. King Abdullah and his Hashemite dynasty enjoy solid support and act as a unifying force among native Jordanian tribes and Jordanian Palestinians.

But not for the first time, the monarchy has come in for criticism of late.

In October, a group of retired senior military officers, tribal figures and activists from traditionally loyalist constituencies aired their grievances in a petition directed at King Abdullah.

Attacking Trump’s Middle East policy, the signatories urged the king to stand firm against any moves that harm Jordan.

The king subsequently announced he would not be renewing a deal that has let Israelis farm Jordanian land near the border since the peace treaty of 1994 - a move that won approval at home and was seen aimed at defusing some of the anger.

The petition also included a call for the monarch to devolve more powers to parliament.

“Loyalty is overwhelming in Jordan but that doesn’t mean there are no pockets here and there that are against even the monarchy. And they are negligible, yes, but through social media they will have a ... big voice,” said Fayez Tarawneh, a pillar of the establishment who has served as prime minister and head of the royal court.

With the traditional print and broadcast media loyal to the state and no organized opposition political parties, social media has become a channel for dissent.

The government has launched a public awareness campaign on its dangers. “Fabricated news obstructs development and confuses public opinion,” declares one of the banners erected in recent days around Amman.

King Abdullah has stepped into the debate about its role in unusually strong terms, taking aim at what he described as false rumors and stories spread online in a lengthy article published in pro-government media.

Addressing speculation over a month-long absence this summer, the king criticized a “wave of rumors and false stories” that had spread concerning his annual break. “The question persisted: Where is the king? Some went as far as questioning my presence even as I stood before them.”

“Unfortunately, some people have tried to spread rumors targeting the morale and unity of Jordanians,” he wrote.

There was an urgent need, he wrote, to develop laws to ensure the protection of freedom of expression but also to “combat rumors and misinformation, and counter hate speech”.

French police clash with protesters in Paris
“Anyone who offends a Jordanian — whether from my bigger Jordanian family or my immediate family — offends me personally.”

“NOT AN EASY RIDE”

Amnesty International said the article appeared to signal the king’s support for proposed amendments to a cybercrimes law that would “deal a devastating blow to freedom of expression in Jordan”. The amendments were sent to parliament in September.

“They are deeply scared of Facebook,” said Ali Braizat, a dissident from the town of Dhiban who has been jailed twice for opposition activities.

Braizat, 55, is an unusually strident critic of King Abdullah, crossing red lines that allow criticism of the government but not the monarch.

His town is one of the provincial tribal areas upon which the Hashemites built their support among native Jordanians. Many of its people have benefited from state jobs, including Braizat until he resigned in 2001. Jordan’s police chief is from the area.

Braizat’s last spell in prison was in January, when he was held for one month. His arrest sparked protests in Dhiban.

Braizat, a lawyer who also farms olives on family land in Dhiban, was a signatory of the petition, describing it as a “clear and frank” message to the king and his foreign backers.

“The Jordanians are telling the king what’s requested of (him),” he said. “In the midst of what’s going on in the region we don’t want to change the regime. But (he is) the one in charge and responsible firstly and finally for changing things.”

During the Arab Spring, there were protests in Dhiban but these were to demand more state jobs and services, not political reform, Braizat said. A visit by King Abdullah helped manage the situation.

“What is needed really is continuous dialogue within the country to explain more ... the procedures the government has to take. In certain areas, you need some surgery,” he said.