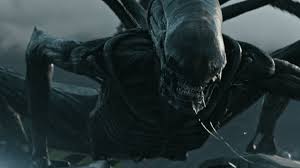 Finally forced myself to watch Alien Convent (2017). I wasn’t impressed by the ‘content’ of the trailers for the movie (see below) with the cute cast and the apparent rehash of the original horror format (with the unsuspecting ‘dope’ getting impregnated by the face-hugger. The title seems a bit self-righteous and cheesy. (Covenant is an all too familiar religious term). And the lingering memory of Prometheus was still there to haunt me.

Only the visuals looked stunning and worth a peek on the silver screen. Boy was I surprised with what I found. Covenant was worth a review in its own right. The casting is appropriate, the story very dark and brooding and well-paced. It’s both action-packed and tensely gory. And the set designs and concept art are superb. (The hypersleep chambers, hanging in a row, look like hard drives or body bags). The movie score is both existential and triumphant. But first some yuks to get through.

The trailers are full of scenes not found in the movie. You felt some were deleted scenes, a common practice among trailers, but you also felt some were from a forthcoming sequel already in the works, if not already finished. Some of the set designs looked almost the same as those in the very first alien movie, circa 1979, with actors you didn’t see in Covenant.

Even the scenes that were in the current movie, were very deceptive. You have a scene with a guy bleeding, almost exploding from the inside, with his spine bending. You thought that he was turning into one of those xenomorphs. And the next scene has this female crew member holding a knife defending herself, against him maybe? (There’s also a white, black racial contrast in the scene).

Nope! Don’t want to spoil it for you but the point is that this usage of trailers was very intelligent, telling people in effect that we are retracing many of our steps and bringing back golden oldies while, at the same time, we’re also bringing in new horror and gore elements you’ve never seen before. Who knew Ridley Scott had become so shrewd with all his years battling the Hollywood bureaucracy?

Now the good stuff. The movie does in fact retrace steps from the 1979 classic, and thank heavens for that. You see this straight away with the movie score, adapted from the original movie, along with the presentation of the title. The colony ship is completely different but also ‘recognisable’. Its huge and ultramodern but heavy and bulky, much like the original Nostromo and its giant factory-type payload of iron ore.

Same goes for the insides. You have holographic projections and flat-screen displays but the darkness of the cockpit and how cramped it is makes you feel like you’re inside a WWII submarine, a motif Ridley Scott used for the original Nostromo. The cast is younger, cuter and smoother than the original truckers in space of the Nostromo, but one of them is called Tennessee (Danny McBride) and he wears a trucker’s cowboy hat at one point – he’s potbellied too – and the age is probably on account of the fact that they’re colonists. They have to be young to do the job right. (A marketing ploy here too. One of the actors who gets killed straight off is James Franco. You see a shot of him rock climbing. Didn’t he do a famous movie about a rock climber?)

One of the (many) problems with Prometheus was that it was too ultramodern. In the process, it ended up feeling out of date because the fancy tech that exists now, like tablets, will be completely out of date by the time a ship like Prometheus will be constructed. (Things looked like they were made out of plastic too, not solid metal or some futuristic resin that was just as tough as metal). Not so here. There’s the appropriate balance between ultramodern and old-fashioned, just like in Alien. (I still like Ron Cobb’s heavy duty designs more for Nostromo. Can’t understand why he isn’t here). The director is going up, or back up, the learning curve, since his Kingdom of Heaven was too grimy and disease-ridden, whereas Robin Hood was perfectly balanced between Medieval grandeur and toughness.

The heroine in Covenant, played by Katherine Waterston, is clearly modelled on Ripley (Sigourney Weaver). She has a similar bone structure to her face and the same air of responsibility and caution, but her voice is much more vulnerable and her body is so much smaller. Again, I have to admit I was pleasantly surprised. (Love her deep brown eyes). 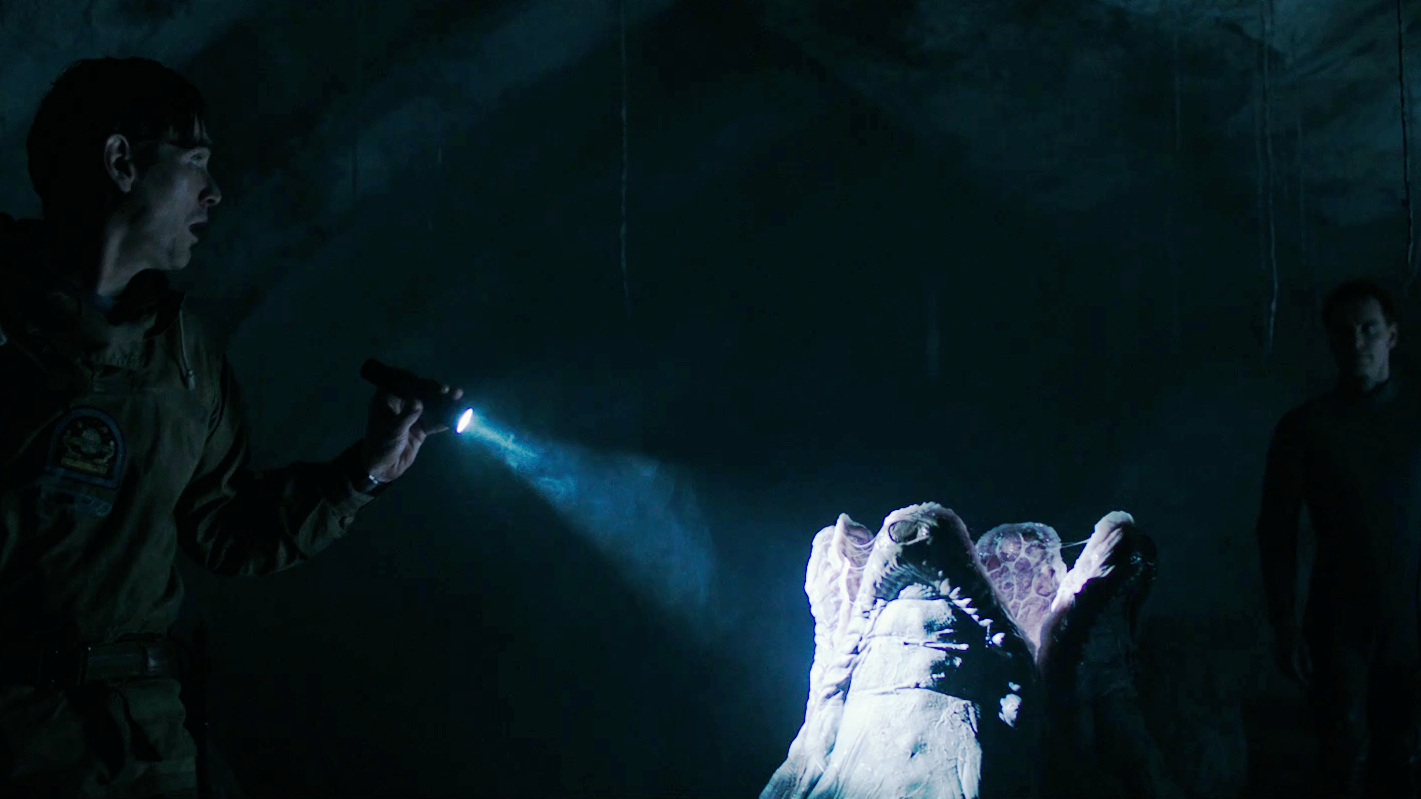 POUCHED EGG: The erstwhile captain (Billy Crudup) about to take his face where no man should have gone before. There’s a sucker born every day!

Prometheus didn’t ‘feel’ consistent with the whole alien saga. Not so with Covenant. It melds the worlds of Ridley Scott’s Alien and James Cameron’s Aliens very nicely together. (The weapons look very similar, along with the logos). But there’s more to it than that.

There’s lots of references to Ridley Scott’s others sci-fi masterpiece, Blade Runner (1982). You see this in the opening sequence involving the android David (Michael Fassbender), where you see his iris filling the screen. This is like the opening sequence of Blade Runner, with Leon’s eyeball and the fires of Hades reflecting off them. Later you have a confrontation scene between David and his twin android Walter (also played by Fassbender) where he kisses Walter, before trying to kill him. This is the Judas kiss from Blade Runner, when Roy Batty (Rutger Hauer) kills his creator, Mr Eldon Tyrell, also after kissing him.

At the thematic level, David is also a throwback, of sorts, to Alien (1979) because he represents the tyranny of science. Without religion and faith, science has become the new religion and scientists the new priesthood. (That’s what the secret android Ash and the supercomputer Mother stood for in Alien). You see this when David is showing off the embalmed alien hybrids – they’re crucified – and his whole hobby of embalming and dissecting things, and people, is reminiscent both of scientists and psychopaths. (Remember Norman Bates from Hitchcock’s Psycho). And he chooses his own name after seeing Michelangelo’s statue of ‘King’ David (decorations in Wayland’s emperor like mega-office).

In a flashback scene when David offloads the airborne virus that kills off the engineers species, the falling gas canisters take on the shape of a double helix. Man’s mastery of the very stuff of life. (He also compares himself to Ozymandias, aka Ramsis II). Contrast this to Billy Crudup’s character, who bemoans how he wasn’t allowed to pilot the Covenant because he’s a man of faith. And the newfound captain insists on an explanation for the solar flare that damages the ship (‘fate’ intruding) and makes it ideal for them to head off to the planet David is living on.

The planet itself is indicative of scientific themes of the man vs. nature variety. You have scene where a crew member heads off to take a leak. In reality he’s having a smoke and laughs when he notices the pattern the smoke creates in the air (infected with the virus). Got what he deserves, don’t you think?

The original captain, played by Franco, wanted to go off to the colonies to get his hands dirty and build a cabin, with actual wood and nails, things they don’t use anymore. (His wife, the heroine, likes it back on earth and the soft technological life). Even the nice guy android, Walter, has a mean scientific streak in him too. When he sees one of the virus-born aliens coming out of a crew member’s mouth, he’s completely impassive at first – doing nothing to help – then you see a small smile on his face. 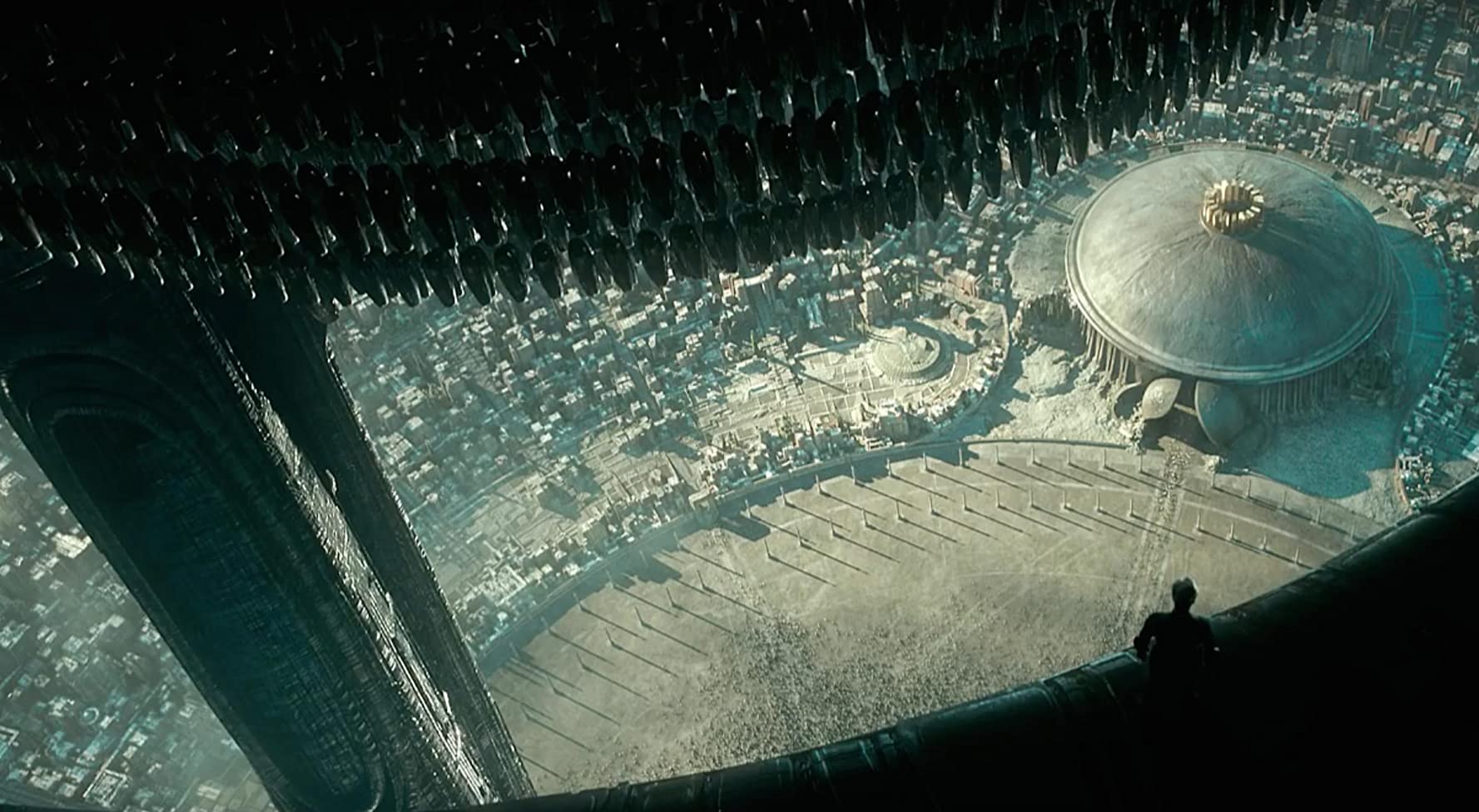 The first time you see Walter, he picks out a human embryo and places it in a ‘biohazard’ canister. (Imagine that!) He also covers his head, inexplicably, since he can’t feel cold. And he secretly likes the heroine. This explains, finally, what happened to Elizabeth Shaw’s husband in Prometheus, when David infects him with the black goo (the engineers’ mutagen). He could have picked anybody to ‘experiment’ on (like the proverbial guinea pig) but he chose him. (Good, never liked the guy myself!) So, Covenant ties together a lot of loose lends left over from Prometheus.

That being said, the original Alien is superior and even more consist with itself. The gore was kept to a minimum, and it was a proper ‘suspense’ movie with designs that will last forever and Oscar-winning performances. The scenes here that try and imitate don’t do as good a job, in part because they use the latest in special effects – the funeral scene, the egg hatching scene. And I miss not knowing where the hell the engineers come from, the one good thing in Prometheus.

But, what can you say. It’s re-energised the franchise and, personally, I can’t wait till the sequel – if only because it’ll give them a chance to fix the mistakes made here!!

Published originally on 31 May 2017, updated 9 September 2020. Special thanks to Dr. Haytham Mouzahim for editing-posting this originally.

Russia denies British claim it wants its own man in Ukraine