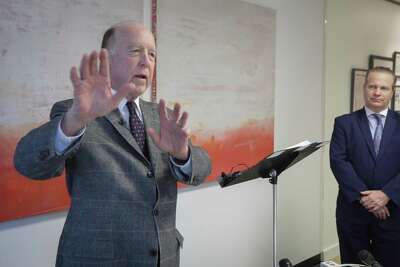 A conservative activist has been charged in connection to an alleged 2020 incident in which a repairman was held at gunpoint by a man searching for fraudulent mail in ballots that did not exist.

RawStory reports that Steven Hotze, 71, was indicted Wednesday by a Harris County grand jury and is facing one count of unlawful restraint and one count of aggravated assault with a deadly weapon.

Mr Hotze reportedly hired more than dozen private investigators to search for instances of voter fraud ahead of the 2020 election , according to court documents.

Mark Aguirre, a former Houston police captain, was one of the investigators. He was arrested in December 2020 and charges with aggravated assault after he ran an air conditioning repairman off the road on 19 October 2020.

Mr Aguirre then detained the repairman at gunpoint and ordered an associate to search the man's truck, according to court filings. A Houston police officer came across the scene and stopped to investigate. Mr Aguirre told the officer that the repairman's truck was carrying 750,000 fraudulent mail in ballots prepared by Democrats.

In reality, the truck was filled with air conditioning parts and tools and yielded no evidence of voter fraud.

Mr Hotze's attorney insists his client had nothing to do with Mr Aguirre's alleged attack and that he simply paid the man to investigate voter fraud.

Grand jury subpoenas found that Mr Aguirre was paid $266,400 by Mr Hotze, with the majority paid the day after Mr Aguirre's alleged attack.

Despite the charges, Mr Hotze said he plans to continue to investigate election activity in Houston.

Mr Hotze has long been a booster of conservative causes. He helped beat Houston's anti-discrimination ordinance in 2015, which he claimed was "pro-homosexual." He also opposed the legalisation of same-sex marriage the same year.

During the 2020 election, he tried – and failed – to have 127,000 legally case ballots from drive-through voting locations tossed out as illegitimate.

Mr Hotze's beliefs are so far right that he has sometimes run afoul of other Republicans. After the murder of George Floyd by former Minneapolis police officer Derek Chauvin set off nationwide protests, Mr Hotze left a voicemail for Republican Governor of Texas Greg Abbott telling him "to shoot to kill if any of these son-of-a-b**** people start rioting."