A 22-minute video released Tuesday by the Islamic State shows the execution of captured Jordanian pilot Moaz al-Kasasbeh as he is burned alive in a cage.

The brutal video is both one of its most violent and most slickly produced. Filled with wire-frame drawings and digitized cuts that dissolve its subjects in a flicker of pixels, the video uses Kasasbeh to attack the U.S.-led military campaign against the Islamic State.

Prior to his execution in the video, Kasasbeh delivers a ringing condemnation of the West and his country, urging the mothers of Jordanian pilots from preventing their sons from going to war against the Islamic State.

With a black eye clearly visible on the left side of his face, Kasasbeh explains in detail the military coalition arrayed against the Islamic State and the contributions made by each country in the fight, placing special emphasis on the contributions of Arab states. Kasasbeh also details the bases out of which missions against the Islamic State are flown.

“The message that I direct to the Jordanian people: Know that your government is an agent of the Zionists,” Kasasbeh says in the video.

Kasasbeh was captured in December when his jet was downed over Syria.

The video was released by al-Furqan, the media arm of the Islamic State, and according to Jordanian state television, the execution was filmed on Jan. 3. The video’s release coincided with the Tuesday visit to Washington by Jordan King Abdullah, who abruptly canceled that trip and returned to his country.

President Barack Obama called the video “one more indication of the viciousness and barbarity of this organization” and said it will serve to “redouble the vigilance and determination on the part of the global coalition to make sure that they are degraded and ultimately defeated.”

Bernadette Meehan, a spokesperson for the National Security Council, said in a statement that the U.S. intelligence community is working to authenticate the video.

In recent weeks, the Jordanian government has been engaged in highly public negotiations with the Islamic State, which proposed to swap Kenji Goto, a kidnapped journalist, for Sajida al-Rishawi, who is imprisoned in Jordan for her involvement in a 2005 terrorist attack in Amman.

Last week, the Jordanian government agreed in principle to a swap but demanded their pilot’s release if Rishawi was to walk free. Those negotiations fell apart when the Islamic State refused to provide proof of life for Kasasbeh. It is now clear, according to Jordanian state television, that Kasasbeh had already been killed — even as negotiations were ongoing.

The video presents his execution as retaliation for civilian casualties inflicted by the U.S.-led air campaign in Syria. It opens with a narrator describing Jordan’s role in that coalition and its willingness as a U.S. ally to support military actions in Iraq and Afghanistan.

After describing how the United States and its allies coordinate their aerial missions in Syria, the video cuts to a shot of a wire-frame drawing of an F-16, the plane Kasasbeh once flew, moving through a dark space filled with images of destruction, including a burning bus, a demolished building. The plane’s targeting reticule centers on a crying infant wearing an oxygen mask on what appears to be a hospital bed.

The video then shows an image of an AGM-65 laser-guided bomb, a widely used American-made munition. It cuts to a series of images showing children suffering various degrees of burn wounds. With each image, the wounds get progressively more severe. At the bottom of the screen a temperature steadily increases toward “max.”

The video then cuts to a scene of Kasasbeh walking through an area strewn with rubble. In a series of jump cuts, the video flashes to news footage of bodies being dug out of rubble. The implication is that Kasasbeh is being confronted with his crimes. He is shown on camera looking at a destroyed building with an expression of horror. All around him, masked fighters view him impassively.

He is then placed in a cage and burned to death. 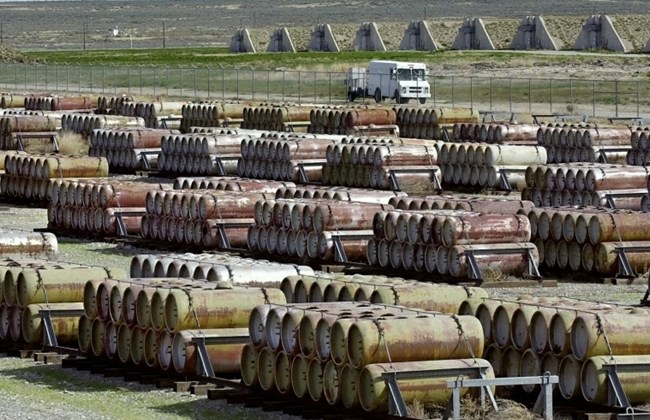